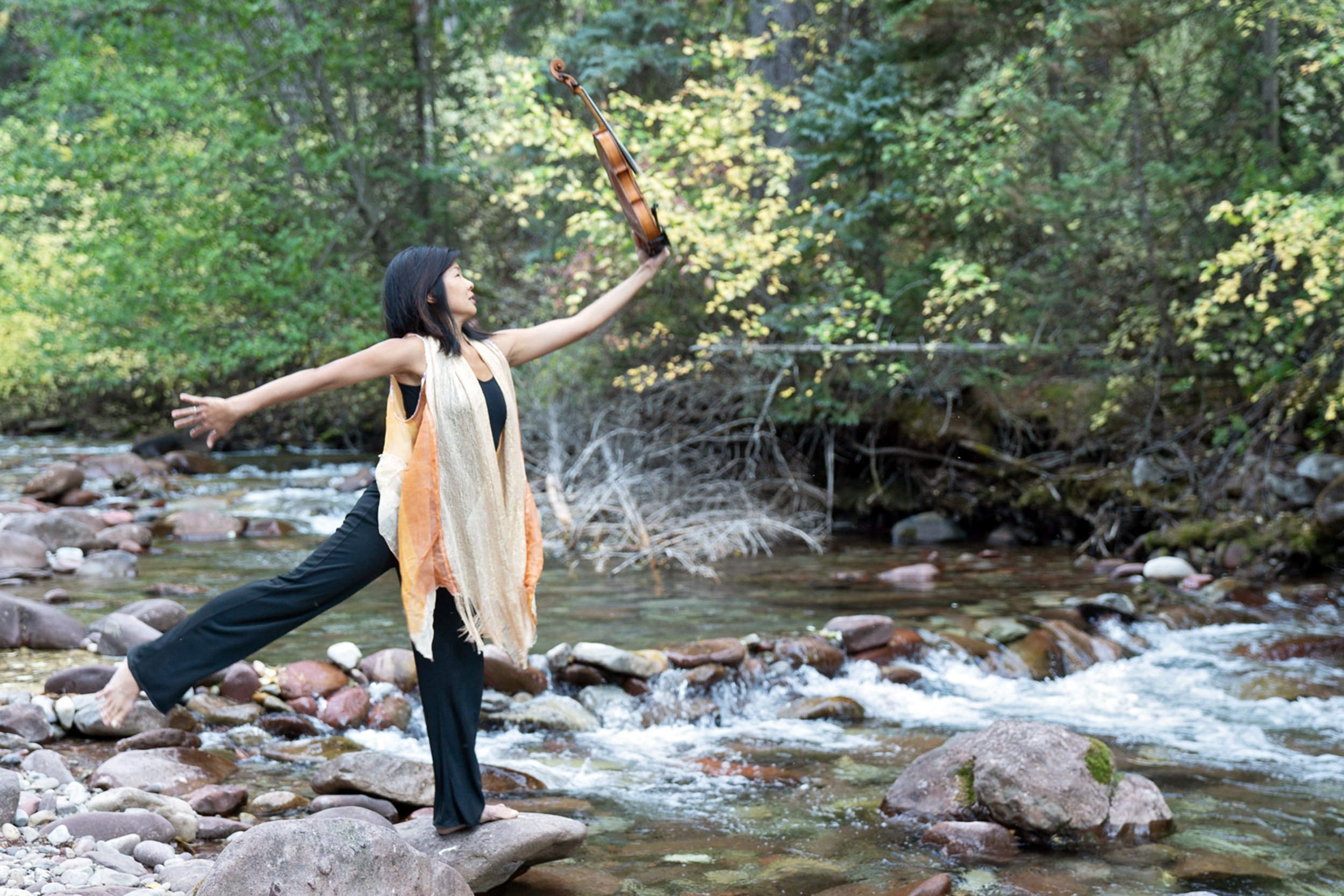 To watch MinTze Wu play classical violin — in the Sage string quartet as it performs Joseph Hayden’s Last Words of Christ at Third Street Center — is to witness artistic rapture.

To hear her play Irish fiddle — say, Turkey in the Straw at Beer Works — is much the same, but with more abandon.

Wu has performed as a member of Azmari Quartet, Sarasota Opera, San Diego Symphony, and Australian Chamber Orchestra. It was the Aspen Music Festival that first brought this classically-trained violinist here in the 1990s.

The 7,156 mile journey from Tainan, Taiwan to Carbondale held many daunting steps.

When Wu began playing piano at the age of three and a half, she spoke only Taiwanese, a language forbidden in public settings during that time in Taiwan.

She recalls, “I would go to a class for toddlers, and I couldn’t understand a word.” She was fortunate to get in at all; her traditional grandparents didn’t believe in educating girls.

“My parents were educated and determined that their girls would be the same,” Wu explains. “Our household was barren, with second-hand wood furniture and diapers. But we had a Kawai upright piano. It was part of my mother’s dowry. My father’s family thought it was a useless thing, unlike gold or money — a useless luxury item.”

During third grade, Wu was accepted into a special music program. Because she was among the shortest in the class, she had only two instruments to choose from: flute or violin. She chose violin.

“I could get away with the piano without much practice,” she says, “But the violin is a very difficult instrument. I was drawn to something challenging.”

She stepped into an even bigger challenge when she moved to New York City, alone, at 14. The reason: an invitation to attend Julliard Pre-College.

“I really wrestled with the idea of becoming a professional musician, how to lead a meaningful life as a musician,” she recalls. “Going to New York meant a sharp left turn in my life, but nobody says ‘no’ to Julliard. It’s an institution you bow down to.”

After Julliard, Wu won a full scholarship to the University of Cincinnati, then moved to the Cleveland Institute of Music. “I would credit just about every aspect of my musical training to that institute,” she says. “There were times in New York when I felt like I could get drowned with the sheer number of people, all the talents. But in Cleveland, the environment was simple and relatively boring. We would stay up all night and read the whole Beethoven string quartet cycle. We were so dorky! So immersed.”

Wu remained immersed in chamber music, performing in concert halls in Australia, the U.S., in Taiwan’s National Opera House and even in remote villages in Newfoundland. In 2002, she moved to Boulder to study for a doctorate in music, and from 2004-07 she served as full-time faculty at Northern Kentucky University.

Although that CU doctoral degree remained what she terms “unrequited”, other loves took root in Boulder. “It was then that I realized that Colorado is a home of some sort for me,” she says. It was also there that she discovered an Irish pub that offered live music. “I would go there religiously every Sunday, and I would close down the place. I only knew two tunes, but soon my repertoire exploded. I loved playing Irish music, and it really opened up my whole expression.”

It was through Irish jams on Pearl Street that Wu met Irish flute player Jem Moore. Moore also performs on guitar and hammered dulcimer, and he’s an accomplished filmmaker. That opened up a whole new area of life; the two married in 2006. They now have two talented artistic daughters, Adelaide and Camille.

The Wu-Moore family, who had been living in Lyons, Colorado in 2007 (and had to evacuate during the flood), moved to Taiwan in 2013. In 2018, Jem landed a job as a pilot affiliated with the Aspen airport. Soon after, the entire family touched down in Carbondale.

These days, Wu is as much a producer as a performer. She recently created a program that interweaves Beethoven’s Kreutzer Sonata with the Leo Tolstoy novel it inspired. Wu performed excerpts of the production in Carbondale last fall. She staged the full work in January in Taiwan, where she travels twice a year and serves as the Artistic Director for the BenFeng Music Festival.

Recently, Jem joined Wu on the airwaves. Of their collaborative classical music program, Wu confided on Facebook, “I won’t tell you that doing a radio show is one of my fantasies growing up. I won’t tell you that my husband Jem has a voice like honey and rum … I would tell you to tune in to KDNK from 8-10 a.m. on your beautiful Sunday mornings.”