Branching Out: Making love with a tree 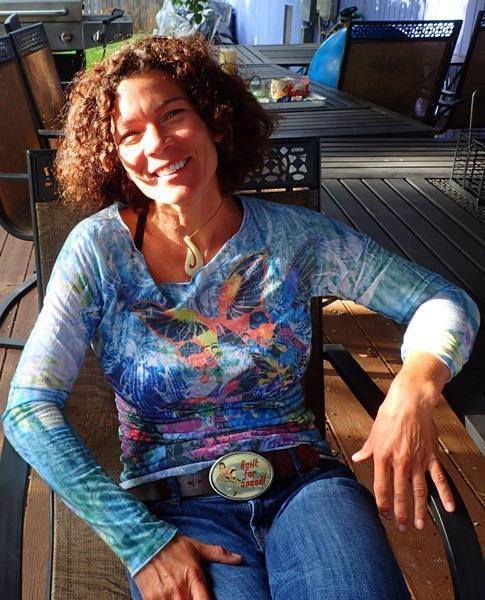 With a lifetime of working in nature, I feel like a “holder of secrets” at times.

My second favoritest job ever was as an arborist, working for my friends Mickey and Susan as an undergrad. Each morning at a new job site we’d step into our saddles, gear clinking just as it did on the weekends, when my “saddle” was a legit climbing harness. Ropes at the ready, another day with trees.

Canopies evoked a multitude of feels. Adulthood fell away as my feet left the earth. Branch to branch, stolid bark beneath my hands, I rose. No office walls or ceiling fluorescents, computer screens. No, I was hangin’ with the most powerful organism on the planet: trees. Light absorbing, carbon storing, oxygen exhaling marvels — gentle witnesses that had often been alive four, five times longer than I.

The soul of each was unique. Some were magic. Pruning an ‘Autumn Purple’ ash in September was like being in candle flame: spacious luminosity. Cleaning an overgrown apple tree was a vintage Winnie the Pooh illustration come to life, minus the honey pot — mottled, ancient bark, the sparkle of shifting shade and sun. And of course all those luscious, dangling fruits.

Terrifying trees existed, too. I still recall my first one — early morning single-digit temps; nary a cheery spirit on the crew. My assigned tree was long past prime; its black, rotted boughs scratched at lowering winter skies. Shaggy bark hung in ghostly strips from broken elbows and limbs.

In trees so old, the lowest branches were often beyond a throw rope. As the bucket truck lifted me to its first Y about 15-20 feet up, the boom just … barely … knocked it. Bad karma. Reverb entered through my soles as I stepped from bucket to bough, balancing on glaze ice. Gripped with fear, I hugged the trunk but a moment: No way. I asked to be lowered back down. There was nothing right about the moment.

Despite that one episode, I felt strong climbing trees, earning my place with the crew as a safe climber and adept pruner. Ascending each tree was “connection.” Hooking and unhooking my lanyard as I pulled my rope to the top, the trees insinuated their beings into mine. Out along their limbs (my own dangling or with a steel toe leveraged against a branch) was a floating choreographed descent: reaching, leaning, observing, cutting. Feeling patterns, sensing space, time; energy in relation to other branches, other trees. What wanted to be revealed?

Why, the tree’s true nature; every species unto itself.

Pruning still arouses an intimate enchantment. Bodily, it simply feels beautiful, powerful to do, be it a mammoth tree or 12-foot lilac — that dance with another species, determining its future. Never from the outer edges, but always from the center, its core, on outward. And if you’re good at it, you can’t really tell it’s been pruned by completion. But you can see how truly elegant a mere shrub or tree can be. If you’re an openhearted sort, it’s essence will move you: contemplating or merely absorbing the eons of evolution that created this one specific species — in relation to environment, to climate, to the very creatures living in symbiosis with it.

To discover and connect with that is indescribable.

First approaching a tree or shrub in need, there’s no sense at all; it’s almost intimidating. Where to start in that mess? Who is this? What are we both doing here? There’s nothing to do but take hold and dive in. That first decisive cut. It’s like discovering a new lover, truly — each additional cut builds familiarity, understanding, confidence.

I still prune for the absolute love of it, whatever I can get my hands on. I thrill at walking up to an unfamiliar overgrown/neglected/slaughtered wreck and lovin’ on it. Only nowadays, not in the saddle. Just shrubs and small trees, whatever I can reach from the earth. It gives me the same flush of “happiness hormones” as making love does, or trail running. And I relish that I encounter it in nature, with nature. I don’t need a $4K mountain bike. I don’t need to flash a 5.10 or even have an audience. Just me and a tree. The most miraculous, influential, crucial organism on Earth.