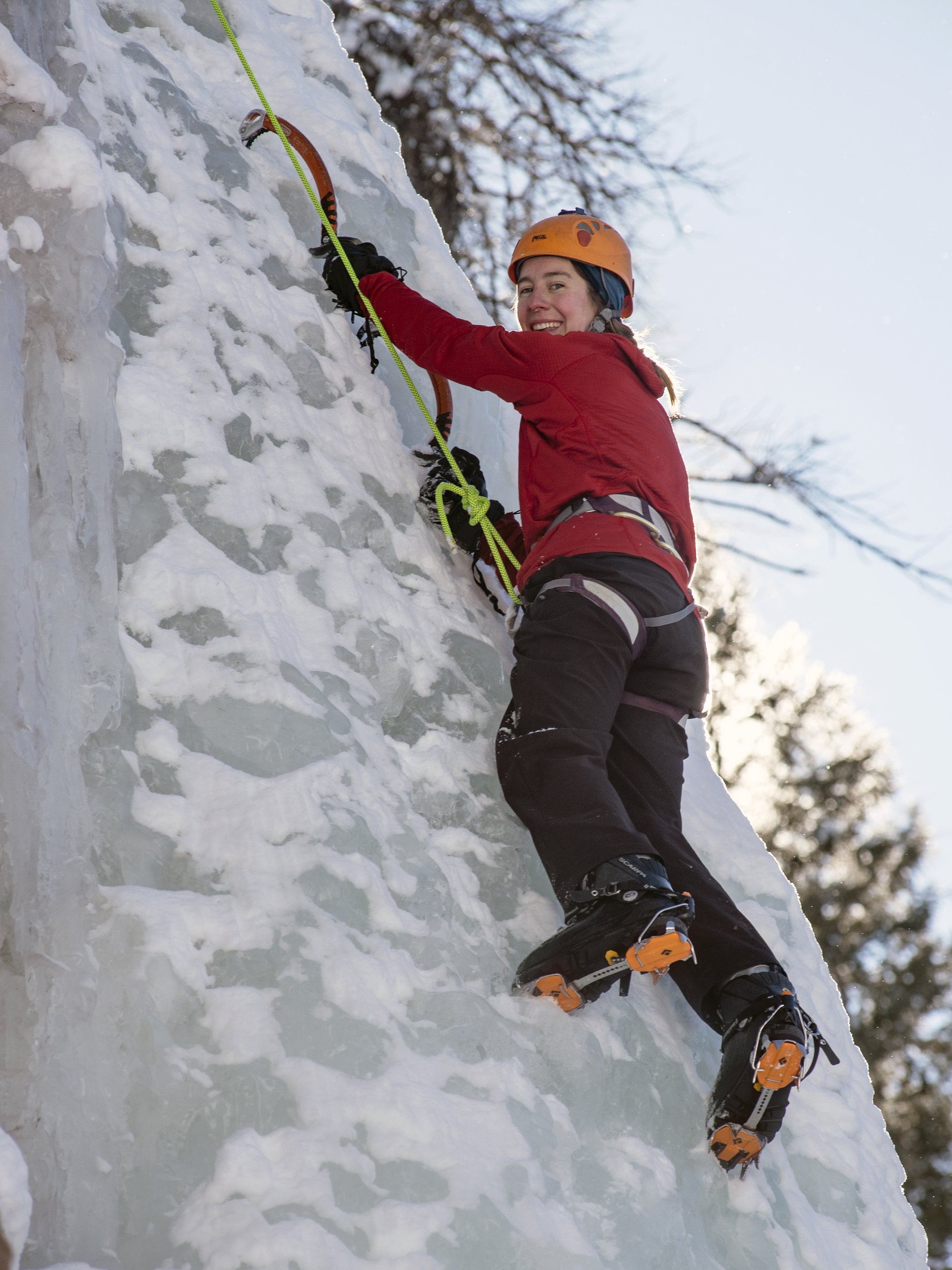 A half hour into our hike up a dry but snowy creek bed, ducking under fallen trees and scrambling up icy chutes, I begin to doubt whether the forest closing in on us will actually disclose an ice wall worthy of climbing.

Without Mike Schneiter, so familiar with the path, we wouldn’t have found the packed trail hidden under several inches of fresh snow to peer up at Redstone Pillar, standing 100 feet tall and “really fat.”

Choosing a good ice-climbing spot in early March can be a challenge, our guide tells me. Schneiter has been the owner and operator of Glenwood Climbing Guides since 2011 and though he often travels for his work, he frequently guides near home in Rifle and Redstone. He keeps tabs on ice conditions visually and also by understanding how they form.

“Ice is very ephemeral. It can be here one day and gone the next,” Schneiter says. “You need the right mix of conditions to make it work.”

Redstone Pillar, creek-fed and north-facing, appears to be some of the last good local ice of the season.

He points out a long horizontal crack about three feet off the ground, several inches wide, running about half the bredth of the ice. My inexperience evokes fear, but Schneiter explains that the crack is a good sign. “The ice at the bottom has settled and relieved some of the tension,” he tells me.

Schneiter suits me up in a helmet, harness and crampons and, to my surprise, ropes me in to belay him as he lead-climbs the ice.

I am not a particularly experienced climber. I understand some basic technique, but not enough to truly embody it. Though he tells me he has never taken a fall leading ice, my task belaying him technically puts his life in my hands should something go wrong.  In those minutes at the base of the ice, as Schneiter reminds me how his belay device works, I feel a thread of trust stretch between us. Schneiter speaks thoughtfully and intentionally, emanating a sense of confidence.

I hadn’t thought much about danger in regards to this adventure until the moment in which I was bodily tied to its possibility. I was grateful for Schneiter’s palpable calm, evidence to the fact that good guiding goes beyond just athleticism and local knowledge.

Schneiter coaches me verbally from the ice face. Your feet should make a triangle with your leading ice tool, he explains. Look at your feet while you kick into the ice, then pull your hips up and into the ice as you swing the ice tool above your head. Look for the weaknesses in the ice to throw your tool.

As he climbs out of comfortable conversational range, I’m left at the base of the ice in this valley of shadow and quiet. Dripping water is audible from the other end of the mass.

I feed rope to Schneiter as he climbs, and bow my face beneath my helmet when he sends off an occasional spray of snow to the sound of small ice chunks clinking down the wall, settling into the powder below with a poof.

I imagine myself in the same spot in the approaching spring and consider how soon this ice will again be flowing water. Ice is so fleeting —  by the season, under the point of an ice tool and, climate change considered, in the long term.

After Schneiter self-belays down the wall, it’s my turn to take hold of the ice tools. Before I approach the wall, he has me swing the tools on either side of my body. In that motion, my arms naturally bend at the elbows and then flick at the wrists — a fluidity I’m supposed to maintain on the wall.

I approach the ice, I remind myself that I didn’t come out here to necessarily make it to the top or to track my time. I came to explore this ice and interact with it in a new way.

“Here I go,” I say. I send the ice tool above my head and land a grip. I kick in the left foot, give it some weight, and bring up my right to kick in next.

My grip on the wall feels tenuous. It’s not that I feel unsafe, but I do know my strength may not last and I use this as motivation to keep moving.

My breathing has quickened, but its rate regulates as my adrenaline kicks in. I’m settling into some degree of rhythm, though I can’t imagine it’s graceful.

By the time I look down to the base of the ice, I’m almost halfway up the wall. Distance quickly distorts size and Schneiter looks quite small below me. Ice stretches above me and I continue.

Per Schneiter’s instructions, I put one tool over my shoulder and pass the one on the wall from my right hand to my left as I kick in again with my feet, maintaining height as I move laterally to follow the shape of the ice.

Hitting a good hold with the ice tool produces a satisfying “thunk” sound, but soon I’m struggling to find those sweet spots. My arms start swinging the tool less assuredly and more wildly as my muscles tire, and eventually I realize I can’t feel my hands at all. I take a few moments to rest shakily on my crampons, moving one arm at a time by my side to get the blood moving with gravity again.

Through the final vertical feet are wobbly, but I climb through them and turn to catch a view up the valley from the top of the ice. The sun seems to hit everything except me and this wall. Parts of Highway 133 are visible through swatches of trees and warm red rock that also underlays the seemingly miraculous ice I stand on — strong and stable beneath my weight, in this valley of microclimates, of surprises, of delights.

Ice can be dangerous to people, but people endanger ice, too.

While his whole family shares his enthusiasm for the sport — one of his four children recently made a name for herself as the youngest person to climb the Nose of El Capitan — Schneiter has had many conversations with his wife about how much they should invest in a business that will see shortening seasons.

As rock and ice climbing both become more popular, however, he wants to help people make the link between connecting to nature and conserving it. He also started outdoor education programs at Bridges and Glenwood Springs High Schools,  teaches multiple climbing courses at Colorado Mountain College and holds gym-to-crag workshops to educate gym climbers on critical outdoor ethics.

“If they’re going to go outside anyway, let’s teach them how to do it well,” Schneiter said. “Get them outside so they realize how important it is to protect it.”