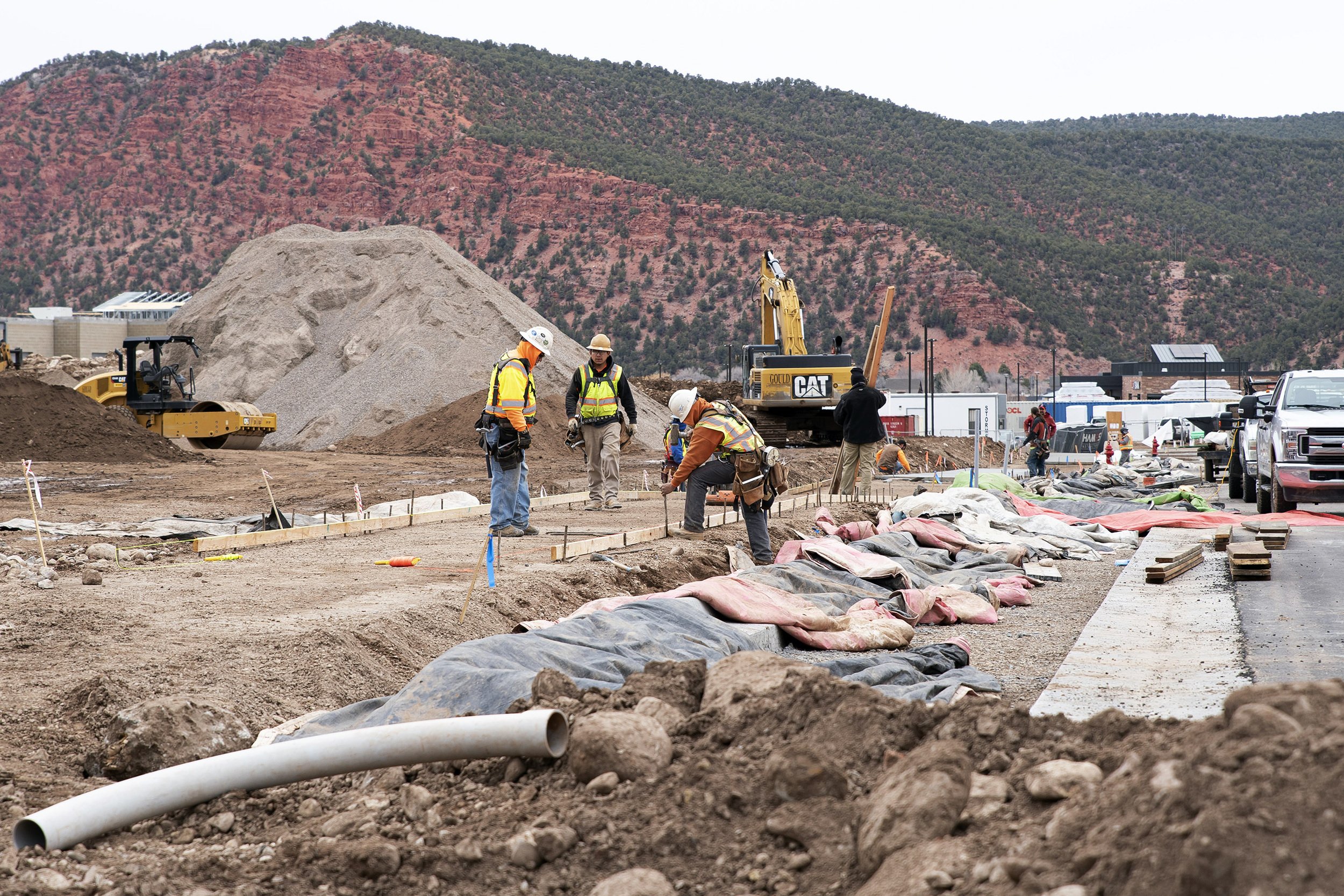 There’s not a lot of good news on the job front these days. COVID-19 and the nationwide attempt to “flatten the curve” and stop the spread of the virus may be saving lives but it has put a record amount of people out of work.

The US Department of Labor reports that, for the week ending April 4, 6.6 million workers across the country filed unemployment claims, including 45,494 in Colorado. One week earlier, 62,000 Coloradans filed for unemployment benefits – almost nine times the highest amount filed during the Great Recession.

US Bureau of Labor statistics show that the nation’s unemployment rate jumped to 4.4 percent at the end of March. Leisure and hospitality sectors took the biggest hit, shedding almost a half-million workers. Construction employment, which added 211,000 jobs in 2019, lost almost 25 percent of that gain in one month.

In Carbondale, however, construction continues.

John Plano, the Town of Carbondale’s building official, told The Sopris Sun that he’s not seeing a lull in small construction permit requests. “I’m actually seeing an increase in home renovations because of the stay-at-home order,” he wrote in an email. “There are no restrictions as to when [the projects] can begin,” he added.

But, Plano has made temporary changes to building inspection policy.

Some inspections, including roof underlayment, footings, foundation, underground plumbing, radon barriers, insulation, and drywall, can be documented with photos and sent to him by email. Others, such as plumbing, mechanical, framing, gas tag, and final building inspections, must be performed on-site. Social distancing is mandatory for on-site inspections and contact with workers or homeowners is limited or prohibited. (Visit carbondalegov.org for the full order.)

Both Plano and Carbondale Town Manager Jay Harrington claim that Pitkin County’s March order to stop all residential and commercial construction forced workers to Carbondale job sites. Neither Garfield County  nor Carbondale have restricted construction but, job sites must adhere to state building regulations, put in place to flatten the COVID curve.

Blake Piland is co-owner of RM Construction, which leads the Thompson Park project on Highway 133. He said the project is still in the first phase, which includes five affordable housing units. Affordable housing is one of the Governor’s construction priorities during the stay-at-home order.

Piland said that workers on-site honor social distancing and follow Centers for Disease Control requirements. “Our site is an open-air location,” he said, which helps.He added that his crew is having safety meetings more than once weekly, ensuring hand hygiene, and encouraging workers to stay home if they have symptoms. “Some workers have stayed home as a precaution,” he added. “But I’ve not heard about anyone being tested or having COVID exposure.”

As for the project timeline, Piland said, at this point, Phase One completion has been pushed back to late summer or early fall. But, it’s difficult to predict, he said. “If in June, we’re still battling the same thing we are now, it could be late fall.”

Jessica Trowbridge, who handles corporate affairs for King Soopers and City Market, told KDNK that the company remains “optimistic that the project will continue as planned.” The Sopris Sun was unable to reach James Thomas, project manager, for details.

The Sopris Lodge Senior Living Community project is also on schedule. Tai Jacober, project manager, said that’s because the job site is considered as essential as a hospital during the pandemic. “It could be converted into a place for COVID-19 beds,” he said.

Jacober explained that all workers are adhering to Centers for Disease Control and state requirements for masks, gloves, and social distancing. “We try really hard to keep the trades separated,” he explained. “For example, the electricians drive together,” he added. “It’s the same with all trades.”

The Sopris Lodge job site is about five acres, over 70,000 square feet. Jacober said it’s big enough to allow some workers to work outside and others inside, while adhering to social distancing regulations. They can also work in two separate buildings at the same time.

“Ten people per permit are allowed on the site,” he explained. “I have three permits so a maximum of 30 people can be there at once.”

He added that there has been no sickness at the job site but supervisors are at high risk. “We have to make sure we comply with COVID-19 requirements.”

Sopris Lodge is scheduled to open on Nov. 4. “I think it will be a great amenity for Carbondale,” said Jacober. “I’m hoping everybody stays healthy.”