Gunnison County stretches to enforce rules on its fringes 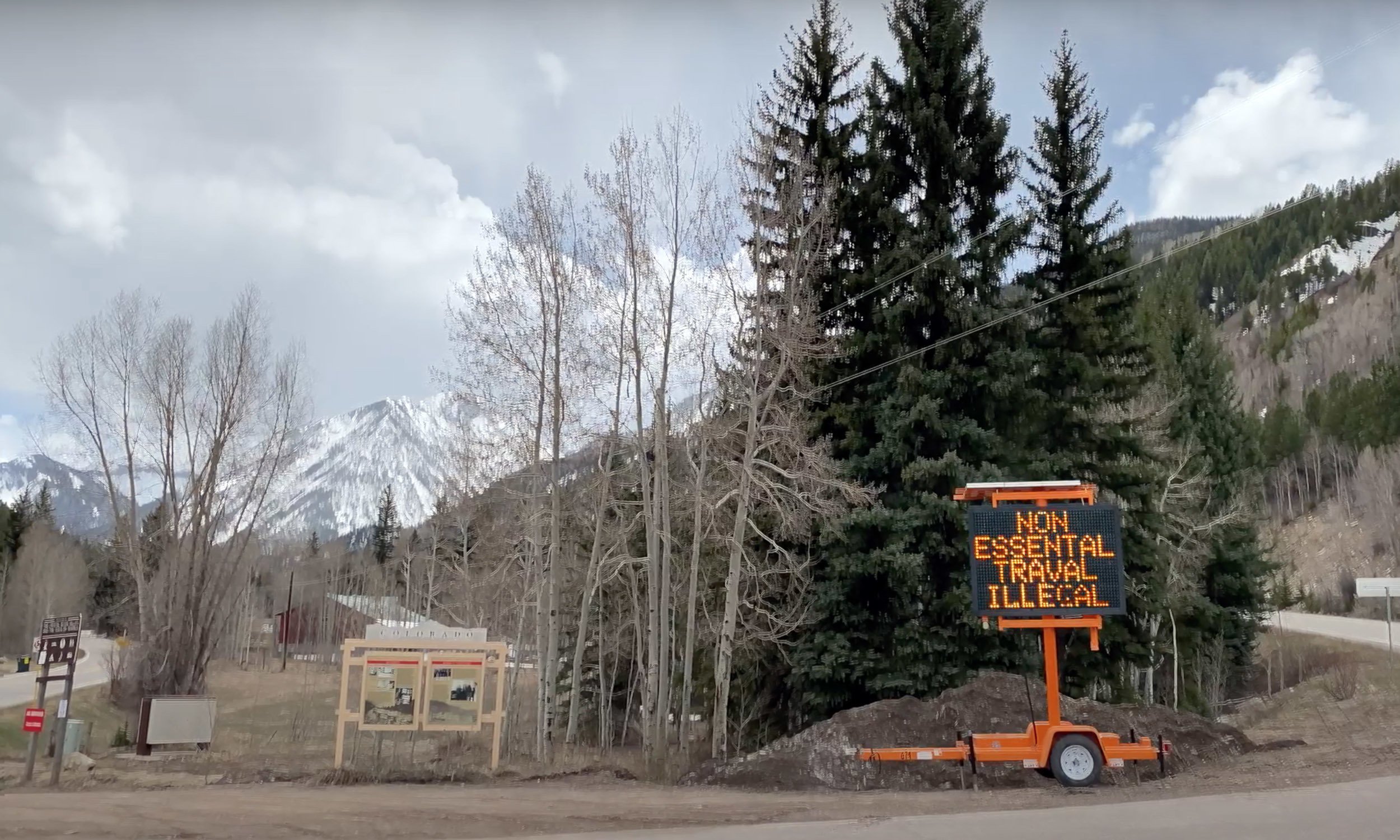 In collaboration with Chris Rourke of The Gunnison Country Times

While lines on a map often don’t reflect real social or geographic boundaries, even the smallest administrative divisions can create real impacts on the people within them.

Case in point, the town of Marble and its surroundings, which lie a three-hour drive from the county seat in winter with half a dozen courthouses closer to hand. Nevertheless, as Gunnison County enacts some of the strictest regulations in the state, the rules still apply. Sheriff John Gallowich said that his deputies are following the same procedures throughout the county.

A portable sign has been set up on County Road 3, advising passersby of the standing Public Health Order. That order went through its sixth revision on April 11, allowing people to come into the county for work or other essential needs, such as grocery shopping. The same holds for those needing to leave the county for the same reasons and return, he said.

They were informed of the ban and asked to leave.

“Our first approach is to educate people coming into the county who may not know,” Gallowich said, indicating that the deputy will check to see if people have a legitimate reason to be in the county. “(If not) they will be told to leave the county. The next step is to give a written warning.”

Northern Gunnison County is a popular area for nonresidents in the summer. Gallowich said he received a letter from a second homeowner in Marble which he described as “positive,” but noted the man said he was hoping to arrive in the area in July.

“We’re going to be concerned about an influx of people, but we’ll monitor it,” Gallowich said. If we need to send an additional car over there, we will.”

“We want to get people to comply before issuing a citation,” he said.

The responsibility of enforcement falls almost exclusively on the shoulders of Deputy Scott Leon. In addition to the Marble area, he patrols Somerset — where the West Elk Mine, deemed essential, employs quite a few out-of-county residents — and an array of vacation cabins off of McClure Pass.

“My biggest thing right now is just responding to complaints,” he said. “I don’t actually go out and hunt down people for being out-of-towners.”

Any traffic stops have been prompted by other violations, he reported, and he’s also been doing his best to educate folks about regulations over the phone — although that can be challenging in an area without cell service.

“I’m not just the average officer in the city where I can go take care of a call in five minutes,” he said. “It could take me 45 minutes to get to a landline.”

As for how folks tend to respond to his remonstrations…

“Some say we’re violating their rights and others understand,” he said. “I also get appreciated and thanked a lot.”

“The Deputy Sheriff comes over almost every day and we appreciate that very much,” he said. “Just that law enforcement presence is welcome.”

Leach reached out to Gunnison County officials after the fifth Public Health Order revision, which contained a clause requiring residents to quarantine even from their families after leaving the county — such as to visit the nearest grocery store in Carbondale.

“I was told that people in Marble need not worry about being cited by the county by having to go to Carbondale for supplies,” Leach said.

Beyond that, he believes the majority of residents are behind the regulations.

“Anything to kind of restrict the flow of people, this community likes right now,” he said. “If you don’t reside in Marble, Gunnison County wants you to not come to Marble — and so does the Town of Marble.”

Indeed, following an old-fashioned conference-call meeting on April 2, the Town shuttered its recycling facility, public restrooms and campground. Still, Leach said, they’ve seen a steady trickle of visitors hiking in the Crystal area or, more concerning due to the rescue risks, backcountry skiing in the Yule Creek drainage.

We wouldn’t even notice it if this wasn’t going on, but I expect that to increase steadily as we get through April and into May,” he said. “There’s a certain cabin fever. People want to come to the mountains.”

He characterized the area’s mood as “concerned but not panicked,” and praised Gunnison County’s efforts to keep its residents safe, even if the orders don’t cover every corner perfectly.

“This is all uncharted territory,” he observed.