Planning for wildfire during COVID-19 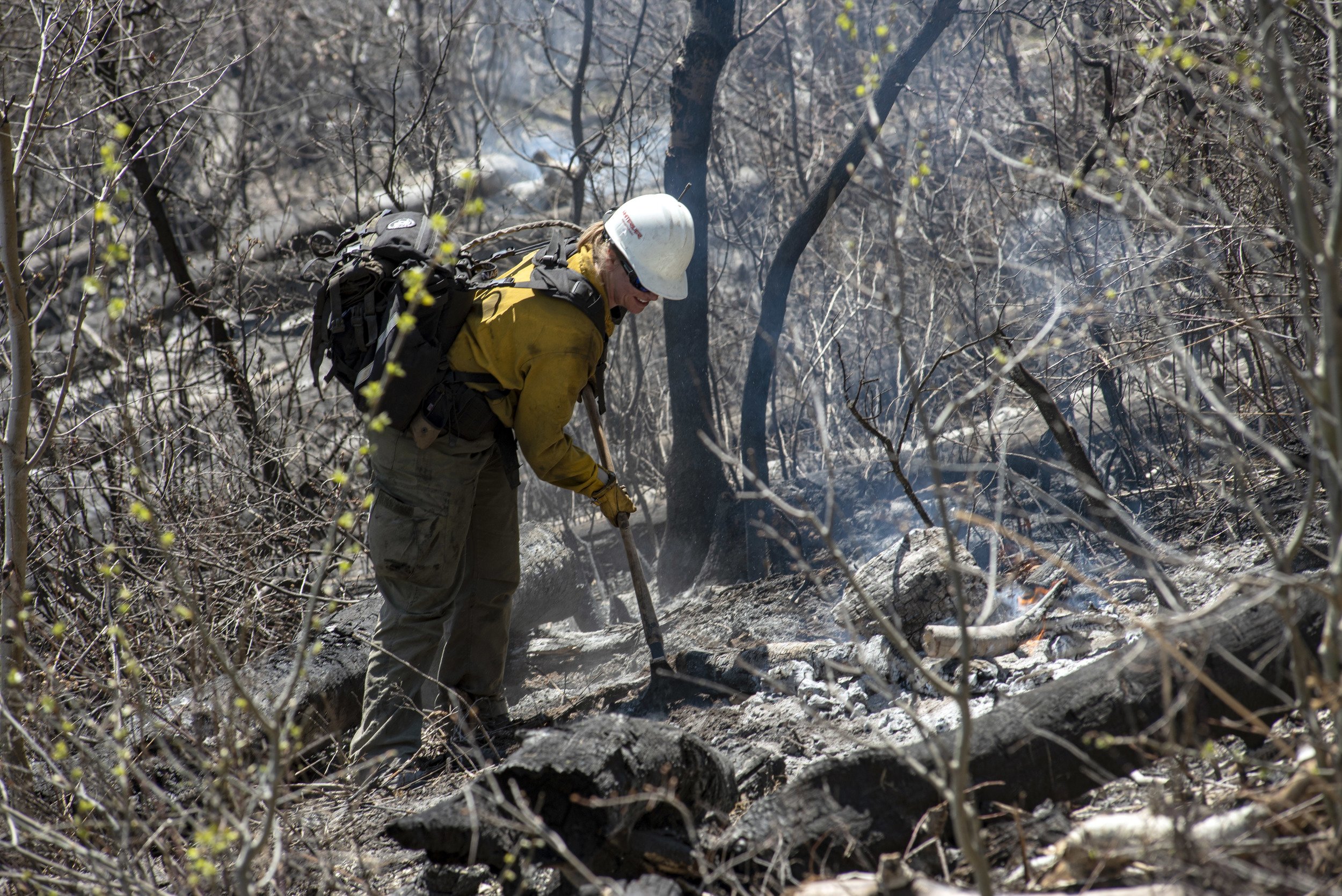 As the heat of summer and fire season both barrel toward the arid West, COVID-19 adds complications to an already delicate situation. Fire restrictions were placed in 11 National Forests and on BLM-managed spaces in 11 counties across Colorado in early April that are not due to expire until the end of May.

Still, Western Colorado firefighters have needed to respond to flare-ups caused by illegal fires, including the Parsnip Fire that burned four acres near Thompson Creek south of Carbondale last week.

“There’s an additional level of frustration,” said Kevin Warner, Aspen-Sopris District Ranger. “Smokey [the Bear] has been around for eons, it seems. It’s hard to imagine that our forest visitors haven’t had the opportunity to learn about extinguishing your campfire before you leave.”

Firefighting agencies at the local and national levels are at the drawing board preparing for the dual blows of fire season during the COVID-19 outbreak. “The nature of wildfire management is that it’s an interagency response, from county to state to federal levels,” said Vaughn Jones, Wildland Section Chief at the Colorado Division of Fire Prevention and Control.

The issue has roused some attention in the US Congress. Representative Joe Neguse of Colorado’s 2nd Congressional District held a press call last week with colleagues from Arizona, New Mexico, and Nevada whom are working to advocate national support for Western firefighters. “Early on in this crisis, the Center for Disease Control (CDC) published prioritization testing guidelines,” said Neguse “and it very regrettably left out first responders from tier one prioritization.” The western state colleagues penned a letter to the CDC and to Vice President Pence imploring that first responders be elevated to tier one testing prioritization.

The true fire perspective on the call came from Don Lombardi, Fire Chief of West Metro Fire Rescue in Lakewood. When Lombardi and other Colorado fire chiefs requested in mid-April that Governor Polis enact a six-month state-wide fire ban “to help us out a little,” the ask was denied.

“That tells us: ‘hey, we’re going to count on you but we’re not going to help support you’” Lombardi said. He pointed to a lack of aid in federal funding in the Coronavirus Aid, Relief, and Economic Security (CARES) Act. “Respectfully,” he said, “where it looks like those dollars are coming down, I’m not sure they’re getting dispersed correctly.”

Though the CARES Act supplied Colorado with $558 million in direct federal aid last week, that aid was sent exclusively to counties with a population of 500,000 or more. That means it was funneled into only five of Colorado’s 64 counties; all of which sit on the Front Range.

“Unfortunately,” Lombardi said, “those counties are trying to figure out what to do with that [money] and fire departments in smaller municipalities and fire districts are being forgotten.”“When you look from a fire perspective,” Lombardi said, “we’re the ones going into the houses of people with COVID symptoms, we’re the ones treating them, we’re the ones taking them to hospitals.” He said that the pandemic is cutting into already “razor-thin” fire budgets and that could ultimately lead to emergencies in which 911-callers experience longer wait times for fewer firefighters to arrive.

At the department level, the Bureau of Land Management (BLM) is interacting with other US agencies — the CDC, the Department of Health and Human Services, and the Federal Emergency Management Agency — in its response to the pandemic, said Jayson Barangan, the acting Director of Communications at the BLM state office.

The infrastructure of wildland firefighting is inherently complex. In the case of large fires, crews may travel from other counties and states to help fight the flames and they usually establish a base camp, or “fire camp” involving dozens of people sleeping in tents, sharing food, and existing in close quarters often isolated deep in the wilderness.

“The challenge is maintaining social distance,” said David Boyd, who recently transitioned from the BLM to the Public Affairs Office at the White River National Forest. “When you think about traditional fire camp, that’s very difficult.”

Boyd said the NFS is trying to pare out jobs and positions that can be done virtually or remotely — from a nearby motel, for example. Information-based fire positions may adopt that strategy, but “there’s not going to be a one-size-fits-all answer,” Boyd said. “We’ll look at every incident and see what we learn and keep adapting.”

Wildland Section Chief Jones said “the big key is in the initial attack.” He noted that some agencies may contract additional aircraft this summer, but all will aim to take early action in fighting fire, “keeping them small and limiting their duration,” said Jones.

Handling donations from civilians is a challenge fire crews have faced for years, according to Boyd. Though the good intentions behind those donations are appreciated, “what do we do with stuff we get under these circumstances?” he asked. Donating money to local nonprofits involved with firefighting efforts, Boyd said, is a more effective way to help.

That and, of course, yielding to active fire restrictions. “We’re really hoping the public stays alert and minimizes risk in areas where they can have fire to reduce the chance that we do need to go out,” Boyd said.

While public effort plays a critical role in preventing fire, weather and moisture conditions remain beyond human control. “Talking to my counterpart in southwest Colorado,” Boyd said, “they’re drier now than this time in 2018.” That fire season, the San Juan National Forest suffered two June fires that burned over 57 thousand acres of land—one of the largest incidents in Colorado’s history.

While spring water flows have yet to peak and fire predictions can be challenging to make, the National Interagency Fire Center issued a prediction of above normal significant large fire potential in parts of Western and Southwestern Colorado in June and July.

Heather Lewin, the Director of Watershed Science and Policy at the Roaring Fork Conservancy, noted on Friday “we went from above average snowpack to below average in the course of a week.” That doesn’t necessarily equate to high water flows, though. With a dry late summer and fall last year, Lewin said that soils will draw in moisture from melted snowpack before that melt makes its way to rivers.

“When you get those dry years, all of a sudden you get multiple worries,” said Lewin, ranging from water flows and agricultural irrigation to, of course, fire. “Adding that to a virus year can create a really stressful year for a lot of people,” said Lewin. “I think everybody’s paying pretty close attention right now.”

Back on the press call last week, Fire Chief Lombardi said, “When people call 911, I think they take it a little bit for granted that we’ll show up and we do.” Perhaps the early months of 2020 have taught the public a thing or two about taking essential services for granted.