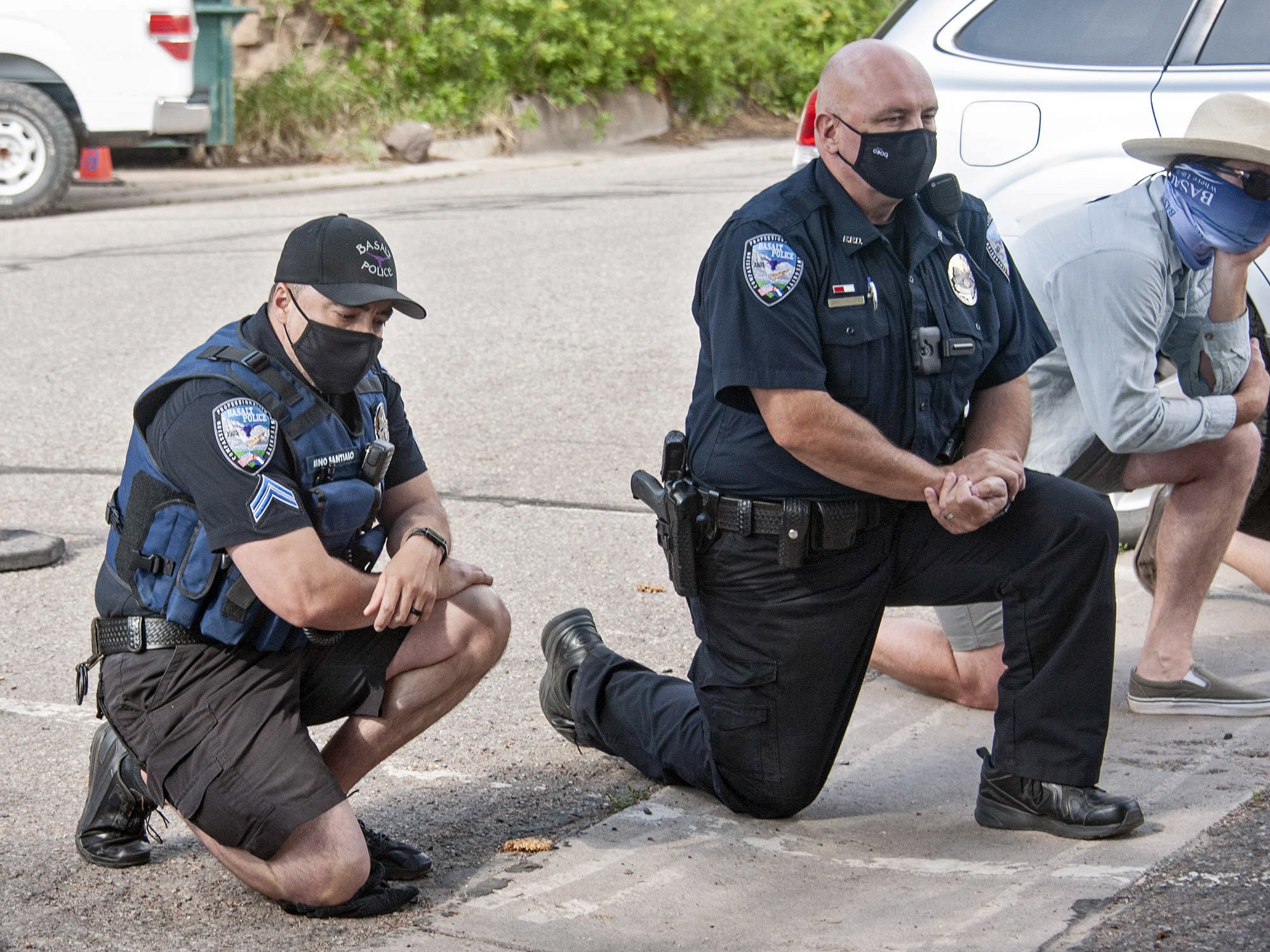 Disgusted!
That’s the consensus of those in law enforcement from Carbondale, to Basalt and Garfield County (GarCo). The chiefs from police departments up and down the Valley expressed anger over the Minneapolis police killing of George Floyd, an unarmed, handcuffed black man.

GarCo Sheriff Lou Vallario said, “We condemn the rogue law enforcement officers who were responsible for the death of an innocent person, and they should be prosecuted for their heinous and cowardly crimes.”
Vallario runs an office with 144 total staff, 100 are sworn peace officers. He explained that he meets with every group of new employees and stresses race relations education, policies and procedures and also to remind people if they have any prejudices or political agendas, “Leave them at the door. We never punish people for being who they are.”

He also emphasized the county supports peaceful protests, “We fully support the rights of freedom of speech, freedom of assembly and the freedom to challenge our government.”

And, Vallario stressed, “We are constantly training.The state requires 24 hours of training per year. Here we do monthly sessions including career path training as well.

Especially in coordination with the GarCo All Hazards Response Team (AHRT), a joint effort between various law enforcement agencies within the county. The AHRT is a collateral assignment with a maximum of 22 team members, being full time patrol officers, firefighters/emergency medical technicians, detectives and law enforcement supervisors.

He noted that Colorado State Law required peace officers to report any instances of police using too much force or doing other illegal activities.

Carbondale Police Department rules take this one step further, said Lt. Kirk Wilson, who has been hired to take over the reins of the department when current Chief of Police Gene Schilling retires as expected in the fall.

“Here,” Wilson reported, “Police are required to intervene at the time,” and not just report an incident later to their supervisor.

He added that the term “badge heavy” is often used to describe overly aggressive officers. “I am upset because that kind of behavior seen in MInneapolis does not reflect me.”

“The Carbondale department policies are very progressive,” Wilson noted, but some tweaks are needed. They will be carefully analyzed and then changes implemented if necessary.

“We encourage officers to talk down suspects away from violence and combative behavior.”

‘It’s a form of verbal judo. It’s an approach of ‘Let’s talk things through, he said.

Wilson praised the Carbondale community as “Very supportive and eager to discuss any issues with us.”

On the job training goes with the territory he described, “Right now we have a new hire who is participating in our Field Training Officers Program. He rides with another officer, watching him or her and learning how Carbondale operates.”

He appreciated the generally calm outlook found in town residents and elsewhere across the Western Slope.

“We are part of the community,” he said, adding he’s confident locals feel the same way.

In Basalt, Police Chief Greg Knott said the Town has partnered with three other agencies: Basalt, Snowmass, Aspen and Pitkin County to provide the Roaring Fork Range training program. It is required quarterly training in proper restraints, de-escalation of force, state and federal regulations, firearms and identification of threats.

He emphasized, “Choke holds are not acceptable except for a deadly force situation, but placing a knee on the neck is never allowed.”

Knott noted, ”Each officer I’ve spoken with is upset about the death of Mr. Floyd, and how the officers acted and failed to act which contributed to his death.”

The department has posted its complete policy manual online. And in a recent statement, Knott and other law enforcement officials wrote, “At times like this it is a struggle to find the right words. As police agencies we need to listen, hear, acknowledge  and change where needed. As a society we need to reflect and act on inequity and create change in the criminal justice system.”

For anyone interested in a career in law enforcement, Vallario pointed to 13 Sheriff’s Office openings. Carbondale has filled all its spots, and Basalt has 11 officers with one position not yet approved. In addition, all residents can participate in upcoming “Citizens Police Academies” in Carbondale and Basalt. Dates not yet finalized.