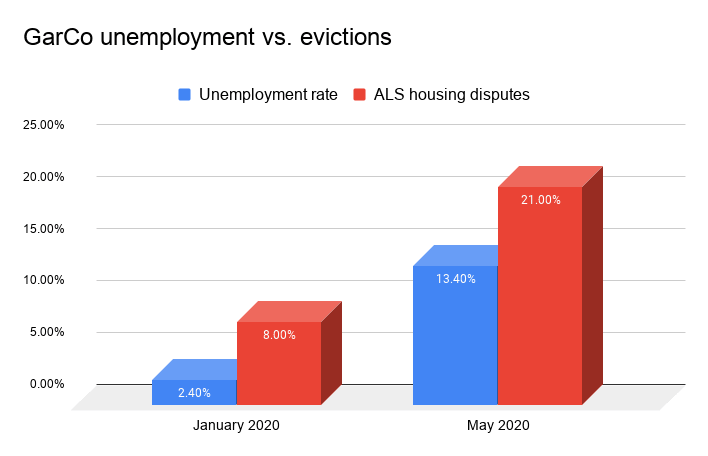 News agencies across the world, from the BBC to The New York Times, have reported that the United States is likely to see an “avalanche of evictions” in the coming months. Will this national crisis permeate the figurative bubble cloaking the Roaring Fork Valley? According to experts, like the coronavirus, it is unlikely we’ll be immune entirely.

Colorado’s moratorium on evictions expired June 13. Governor Jared Polis since increased the length of time required between a notice of eviction being given and when a landlord can file a complaint in the courts from 10 days to 30 days minimum.

Alpine Legal Services (ALS) has assisted those who cannot afford private counsel in civil cases for about thirty years. Many of the files that come through its office are eviction related. That number has expectedly risen since March. While in 2019 housing disputes made up 8 percent of  ALS’s case load, since March of this year it’s increased to 21 percent.

Jennifer Wherry is the Executive Director at ALS. In her mind, “When we talk about public health, housing is a big part of that discussion — if not the biggest.”

While the Governor encourages people to stay home, her office prepares to assist those in jeopardy of losing theirs. The cost of housing has long been a struggle for many in Garfield County and now,“With unemployment going from 2 percent to 13 percent in the course of a few months it’s really presenting itself,” says Wherry.

Wherry also understands the immense stress that comes with litigation and wholeheartedly believes in the efficacy of mediation. Mediation is an alternative to heading straight into litigating a civil dispute.

Through a grant provided by Aspen Community Foundation’s 2020 Rescue Fund, ALS is offering free mediation sessions between landlords and tenants affected by COVID-19. Experienced mediators from Aspen to Parachute agreed to accept the  reduced rate paid for by this grant. Anyone who is interested can call the hotline at 230-3935 from 9 a.m. to noon and 1 to 5 p.m. Monday through Friday to get set up with a mediator.

Wherry has not seen a drastic surge in eviction court filings since Colorado’s moratorium expired but expects that county courts will start to see more filings after July 14 — 30 days from the time the moratorium was lifted.

However, she is hopeful that tenants and landlords will take a stab at mediation before entering into an inevitably arduous court proceeding.“Before they’re getting themselves involved in contested litigation we want people to first think about starting a conversation,” she says.

ALS partnered with Carbondale Emergency Task Force (CETF) and Mountain Voices Project (MVP) to conduct outreach with, and collaboration between, landlords, tenants and lenders. Throughout this outreach process it has become apparent that there is much concern among tenants and landlords in the valley about being able to sustain their dependence on one another.

MVP is a broad-based community organization comprised of 29 educational, non-profit and religious institutions from Aspen to Parachute. ALS is its newest member.

“There is no one size fits all for this recovery,” Wherry says, “Everyone will have to work together and we’ll need all the creative solutions we can get.” One such solution according to Wherry is MVP’s Housing Fund.

For those who participate, a fund created by MVP pays a third of a tenant’s rent for up to three months; with another third to be paid by the tenant and the final third being forgiven by the landlord. “It may not work for everyone but it’s one way to stretch housing dollars much further,” Wherry says.

On June 15, MVP leaders requested that Garfield County contribute $500,000 to the fund. The Garfield County Board of County Commissioners tabled the proposal and before further discussion would like to see a financial commitment from Pitkin County and more collaboration between MVP and existing aid agencies such as Catholic Charities and The River Center.

To Wherry, the MVP fund could be used as another tool for aid agencies to, “Keep in their toolbelt,” and recommend to some of their clients.

Another component often raised is that undocumented individuals do not qualify for some traditional sources of aid and often are too fearful to begin the process.

Wherry sees this as a time to, “Productively have a conversation with all leaders in our community about how to help everyone, not just those that can provide the documentation needed to access traditional economic assistance.That’s where we are,” she says.