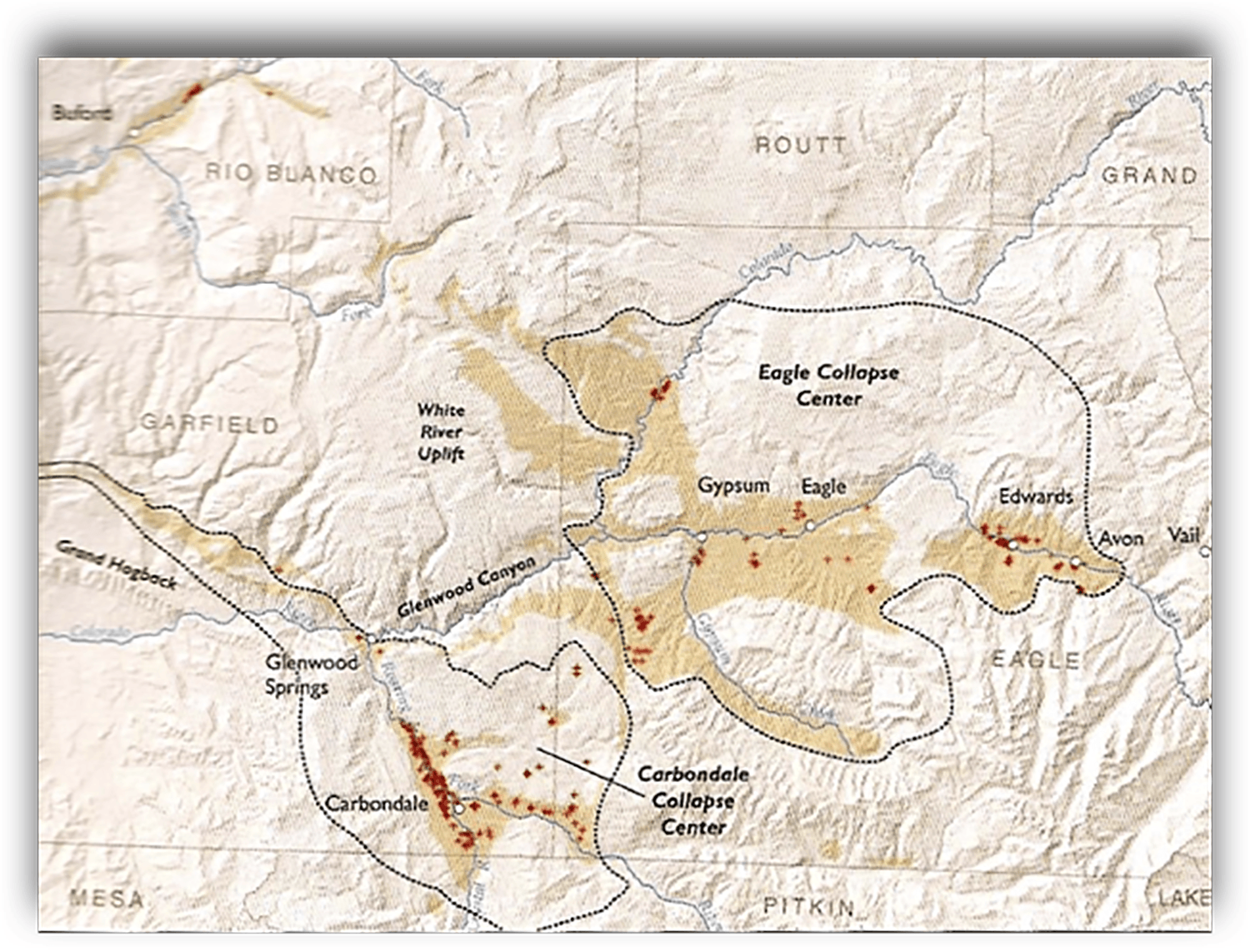 The sinkhole that recently disrupted traffic on Highway 133 is far from the first of its kind in the Carbondale area. In fact, the geology of the area is unusually conducive to such collapses, according to Colorado Mountain College Professor Emeritus Garry Zabel.

“We have the largest concentration of sinkholes in the state of Colorado,” he noted.

That’s because of the layers of gypsum — officially the Eagle Valley Evaporite — that underlays much of the midvalley. The soft, salty rock was formed from what was left behind when an inland sea dried up, and it’s prone to dissolving again at the first opportunity.

In what’s known as the Carbondale Collapse Zone, enough rock has dissolved away that the whole valley floor is 4,000 feet lower than it would be otherwise. The impact is particularly obvious thanks to layers of volcanic rock in Missouri Heights, which were laid down flat but now tilt toward town.

“They’re tilted at a pretty high degree angle.That’s what kinda keyed geologists to start thinking about the collapse issues we have around here.” Zabel noted. “The valley sunk down, the edge of the affected region tilted down. Mt. Sopris, being an igneous intrusion, wasn’t affected by this collapse. It’s kind of an anchor.”

But the process is far from complete.

“You look at the salt content of the springs, and you can determine that the volume of gypsum being dissolved is huge,” Zabel said. “And when that gypsum gets more close to the surface, then you’re going to have more dissolution of the salt.”

And that’s where the sinkholes come in.

“They begin as cave-like features in the gypsum bedrocks under the glacial outwash sediment,” Zabel explained. “Typically, the larger the cavity, the more apt it is to move up toward the surface as the ceiling continually collapses.”

In areas where the gypsum is overlaid by clay-rich sandstone, the effect can be somewhat mitigated, with slow settling instead of sudden collapse — an ongoing challenge for home construction closer to Glenwood Springs. But in Carbondale, the gravelly sediment on top of the gypsum is well suited to filling in any gaps it finds, leaving holes on the surface.

Sometimes, it’s easier to just let it be. A prime example is the large sinkhole at the base of White Hill, which is simply used as an overflow pond for the ditch system. That approach is less viable when one opens up in someone’s back yard — or under a roadway.

Ty Ortiz, Geohazards Program Manager for the Colorado Department of Transportation, sees a resulting road closure perhaps once every couple of years — putting it way down on his worry list.

“I don’t get a ton of sinkhole emergencies like the one in Carbondale,” he said. “It’s still rockfalls and avalanches that are the big safety delays.”

His team has learned to tackle sinkholes on a case-by-case basis from filling them if they’re shallow enough to creating a “land bridge” in one place along Interstate 70.

“There’s a stretch along I-70 just outside of Gypsum where you’ll notice a lot of up and down in the road,” he noted.

Of course, mitigation efforts aren’t absolute, so as with rockfall, Ortiz has a simple solution: “The risks can be lowered just by being aware of your surroundings as you drive down the road.”