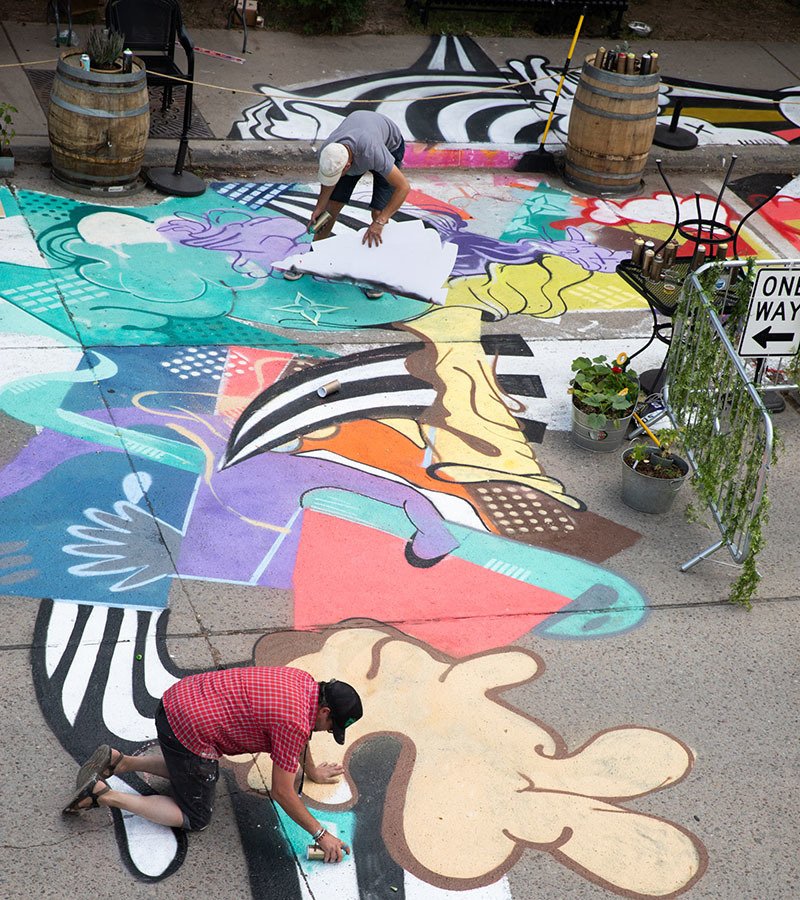 We’ve been through a gloomy stint lately, but there’s some color coming in downtown. No, don’t worry, it’s not autumn yet — enough surprises, right? No, these bursts of color are the doing of local artists’ expression and a community that has got their backs.

But what could artists possibly be using as their backdrop at the 300 block on Main street, where free exterior wall space is surely dwindling..oh…oh wow… The street itself has become the canvas for a new masterpiece in the works by local artists Chris Erickson and Stanely Bell.

Fortunately for these creatives, back in the late ‘70s Carbondale did what many artists are encouraged to do: it took a risk. Albeit a risk perhaps less advisable at the time.

On July 6, 1981 the mayor signed an emergency ordinance in conjunction with the Board of Trustees to use a recent sales tax increase to fund its issuance of $1,750,000 worth of revenue bonds to pay for the concrete paving of Main Street and other nearby side streets. At the time, the administration projected large growth rates and figured the booming population coupled with the sales tax increase would cover the cost of the bonds and their high interest rates.

“The idea was the concrete streets would be semi-maintenance free and in the long run they’d be an asset,” said John Foulkrod, former trustee, “but in the short run they were much more expensive.”

Folkrod served from 1982-92, coming on board just after the streets were concreted. It quickly became obvious to him and his fellow board members that the town was in fact, “Not generating the revenue we needed to cover the cost of the bonds and the town was financially in dire straits.”

In 1983 the board passed a consecutive ordinance to refinance the bonds and obtain more reasonable interest rates. Furthermore, the construction of the Sopris Shopping Center and the opening of the current (soon to be old) City Market began to generate increased sales tax revenue. According to Folkrod, through both these efforts combined, “In the longer term we were able to survive it.”

“I think in the long run maybe it was a good thing but in the short run at the time it almost broke the town,” Folkrod reflected. Indeed, today the street takes far less maintenance than the alternative.

Back then, “It was quite the controversy but not a lot of people know that now because most of that historical knowledge has gone,” Folkrod stated.

As of late we’ve seen controversies over the same million dollar street but compromise is beginning to peer through where there would be cracks had the street been paved in asphalt.

The original COVID-19 response plan was having one lane traffic through the 300 block daily but was not unanimously favored by business owners there. Consequently, on June 30 Carbondale Trustees called a special virtual meeting to order and passed a motion aimed at compromise.

The section will be completely closed off to traffic from 4-10 p.m. Monday through Saturday. On Sundays, the roadway will remain open to traffic as most restaurants on the block are closed.

Artists still get to lay down their vibes with paints, motorists get to drive both directions for most of the day and local business owners on the block each got a bit of what they wanted.