The lady gets a lift 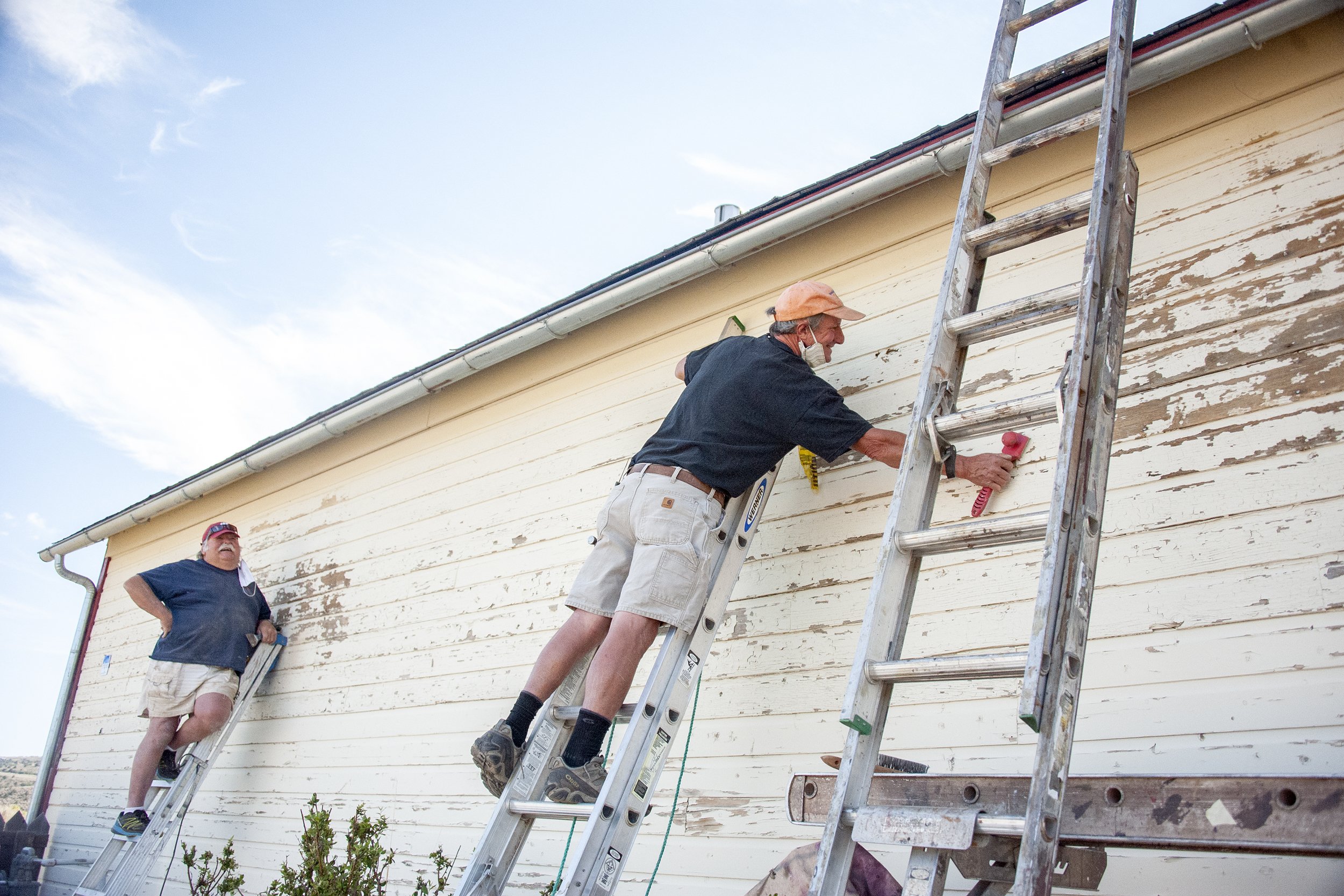 Some call her the matriarch of Missouri Heights, others say she’s a queen of the valley, second only to Mt. Sopris.

Any way you slice it, the one room schoolhouse on County Road 102 has a long and remarkable past. But, time took its toll, and the building needed a makeover.

Recently, the volunteers and supporters of the Missouri Heights Community League began the arduous job of scrapping, sanding and repainting the building’s exterior after a fruitful spring fundraising campaign that brought in $5,000.

As league president Lesley Rameil explained, the 103-year-old structure was initially restored in 2002 after a successful quest to get federal and state historical site designation. With that accomplished, special preservation grants became possible.

“This old building should be maintained so we can preserve this little bit of our history,” Rameil said.

The school hosted its last students in 1956 and also closed the small, separate teacherage, where the educators lived. In the 1960s owner Jim Quackenbush sold the property to the newly formed league, which was created primarily to support the site.

Rameil moved to MIssouri Heights 44 years ago, in a home she still occupies with her husband Larry. She has been involved in the league for over eight years with other Board of Director members Julie Hazard and Jo Ashton.

As Rameil emphasized, this updating project “is important because if not done, the schoolhouse would fall into a state of disrepair that couldn’t be reversed, and that would be a huge loss to the community, both as a meeting place and as a symbol of the history of our area. I can only give a pretty educated guess that those who contributed to our fundraising campaign also felt the same way.”

But, she said, the financial needs continue, “Unfortunately, we’ve had to refund our income from our event reservations for this year, making it quite difficult to use what money we had earmarked for the painting project. We now have to keep that liquid in order to meet our expenses for the coming year, knowing we won’t have any additional income for a while.”

Retired local painting contractor Glen Sloop spearheaded the effort bringing in the dozen or so other volunteers. Painting contractor Dan Rosenthal also worked on the project, saying, “I’m just trying to help out.”

The donation of paint by Ace Hardware of Carbondale and Aspen was a big help, as were lunches for the volunteer painting day provided at no cost by Felix Tornare of Louis Swiss Pastry and Milagro Ranch.

No story about Missouri Heights could be complete without including Anita Witt, who in 2018 passed away at her ranch on Upper Cattle Creek Rd. Before she died, Witt had put much of her acreage in an Aspen Valley Land Trust conservation easement, which prohibits subdivision, unwanted industry and the sale of long standing irrigation water rights.

Witt spearheaded the renovation starting in 1999 being generous with her time and money plus she had already written “They Came From Missouri.” The book chronicles the experiences of the mesa’s original settlers.

She also recognized and reported on the importance of all the school houses constructed for area children. Besides being built for education, they became centers of community life by connecting the ranching and farming families who often lived miles apart.

As the league’s website confirmed, “Today, as the old, historic ranches are being sold to make way for residential development, the schoolhouse serves as a vivid reminder of the ranching and farming traditions that once existed in Missouri Heights.”

The site is available through the league as a venue for celebrations, special occasions, weddings and concerts with its rebirth as the place for community gatherings.

Author’s Note: Just two weeks after my husband and I moved here in 1998 from New Jersey, I met Anita and worked with her to get the schoolhouse effort off the ground. Anita became a good friend who guided and taught me the ins and outs of life in rural western Colorado. She also let me ride one of her horses on my first excursion up here, helped me buy my first horse and begin a decades long love of the wilderness I still treasure.