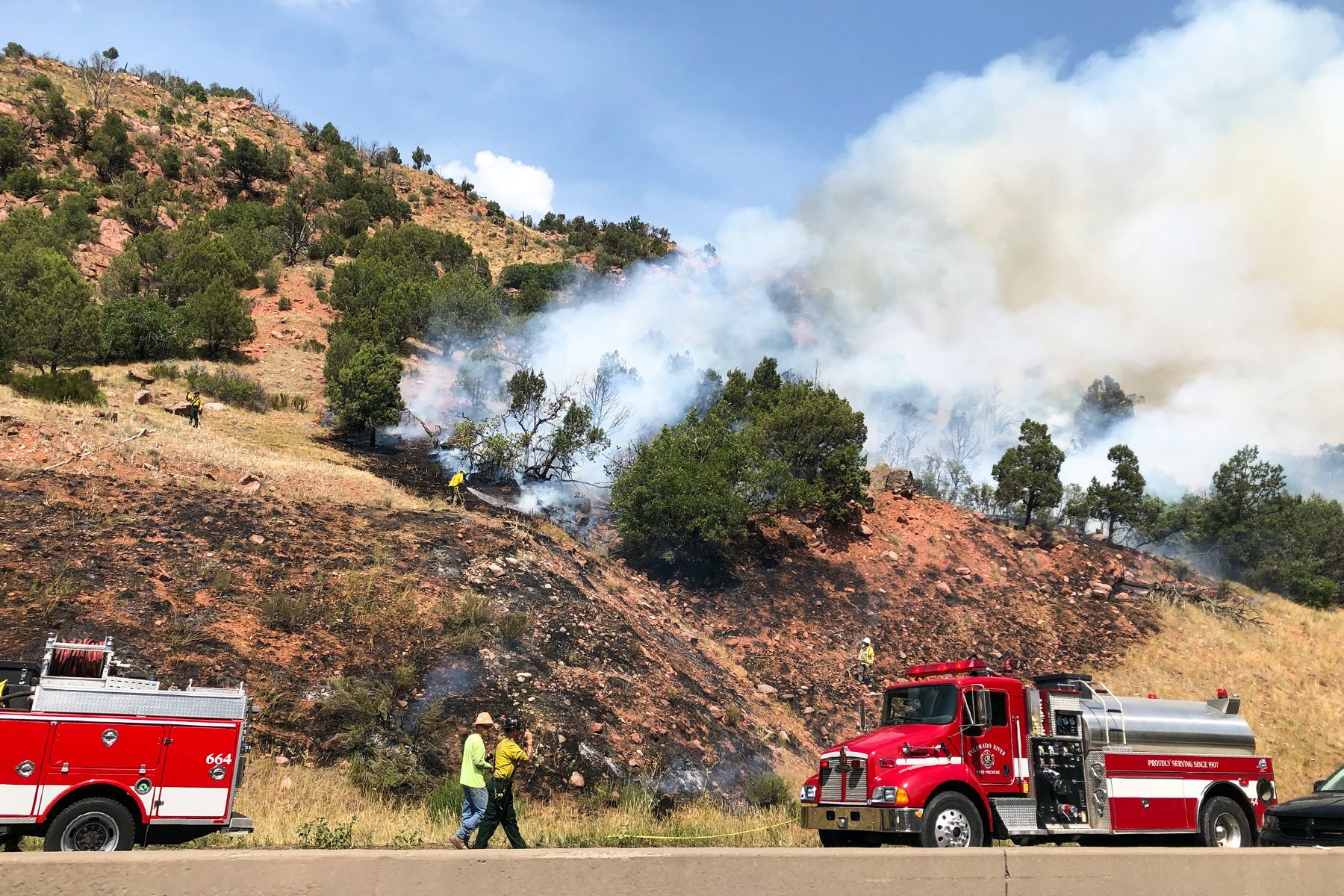 A brush fire in South Canyon prompted a full closure of Interstate 70 from Canyon Creek to Glenwood Springs and a westbound closure at Dotsero as several agencies battle the blaze.

The cause of the fire is unknown, but  it was reported at 2:32 p.m. on Aug. 5, and officials arrived to find construction crews attempting to fight the half-acre fire. It spread quickly, and as of 5 p.m. was estimated at up to 40 acres of pinion and juniper on public land.

Among an array of resources from several agencies are two helicopters and a small engine air tanker. River enthusiasts were asked to stay out of the Colorado River in the fire area so that air support could continue.

Pre-evacuation orders were sent to residences in the Ami’s Acres area, though no homes have been evacuated yet. There have been no injuries or loss of property reported so far.

Incident Commander Harlan Nimmo said, “We are grateful we were able to get a fast response to the fire. We thank our neighboring fire agencies for their quick response. We know closing I-70 is an inconvenience and we appreciate everyone’s cooperation.”

There was no information regarding containment of the blaze. However, “The light winds at this point may be working in our favor,” said Glenwood Springs Fire Department PIO Mina Bolton. Bolton said the fire was not far from from the highway and it’s likely to be quite a while before traffic opens back up stating, “I guess the good thing about COVID-19 is there should be less people commuting.”

Traffic was closed westbound at Dotsero largely due to the influx of traffic in Glenwood Springs. The parking lot of the West Glenwood Mall was filled with parked motorists awaiting the opportunity to get back on the highway.

CDOT did not recommend that westbound motorists east of the Glenwood Canyon attempt taking Cottonwood Pass Road due to utility and road work along that route.

Commuters took to the Facebook page, Roaring Fork Road and Weather Conditions to vent their frustrations and give a glance of the highly congested roadways throughout Glenwood Springs.

Both lanes I-70 eastbound were reopened at MM 109 near Canyon Creek as of 6:15PM. I-70 westbound at Dotsero was reopened as of 7:30PM with a  half mile lane closure between MM 113 and 112 1/2 near South Canyon to allow room for firefighting operations.

According to Garfield County Sheriff POI Walt Stowe the road openings are due to smaller helicopters being able to pull water from a nearby pond alleviating the need to obstruct traffic whilst collecting water from the Colorado River adjacent to the highway.