Take a walk on Emma’s wild side, where strange critters abide 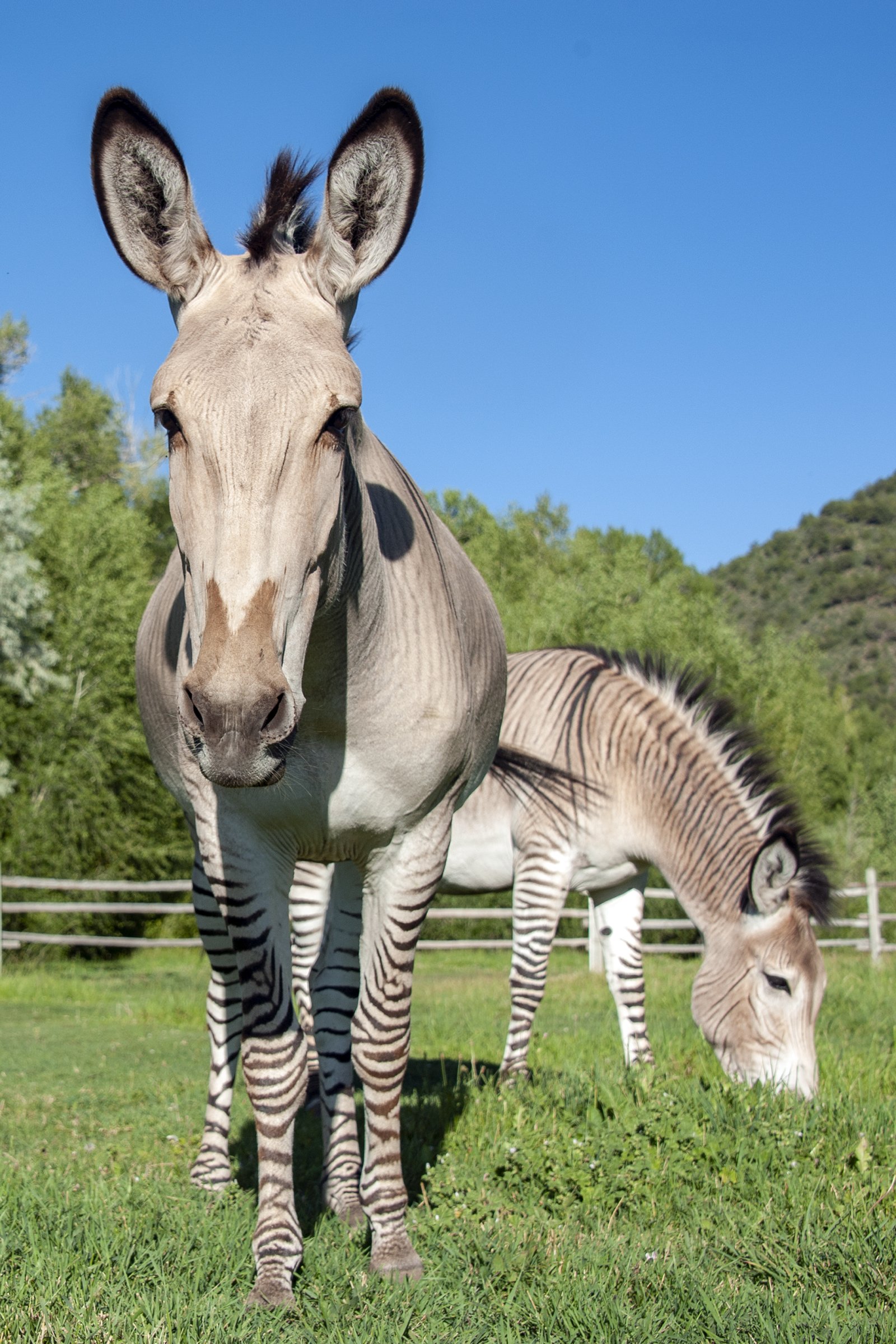 Have you ever met a zonkey?
Probably not. This zebra/donkey cross is considered extremely rare. Some say these critters are so hard to find that the odds of seeing a unicorn are better.

But, as luck would  have it, the Roaring Fork Valley boasts two, living happily together in Emma.

Both three years old, these sweet, gentle animals are an incredible sight. They are named Ariele (from the mischievous sprite in Shakespeare’s fantastical play “The Tempest”) and Carmen (the larger of the two). These delightful equines are the result of a zebra stallion and two female donkeys — called Jennys — getting together romantically.

“I once had a pet buffalo who lived to a ripe old age,” said zonkey owner Bryan Edgington, “But one day he just keeled over and was gone.”

“A friend thought I should consider zonkeys,” Edgington said, “So I did.”

“That friend, who lives in Grand Junction, told me there was a zebra stallion in that area, and once I connected with the owner, the process began.” he recalled. The mares, he explained were also from that area.

Zonkey pregnancies last 12 months, “So we had to wait a while before bringing the mares here, as  myself and the stallion owner agreed it would be good if the foals were born here,” Edgington continued.

Carmen, one of the foals, was quite large at birth.

“We were concerned about the stress on the mare,” Edgington said, “And were quite relieved when everything turned out okay, Emma is their home.”

The zonkeys were halter trained early as it was hard to catch them at times.

“Now at age three, they have decided humans could be trusted so halters are not needed most of the time,” he said.

Instead, Edgington makes an unusual whistle sound to call them.

As Edgington explained, “Zonkeys are long lived — up to 25 or so years, like a horse — so they’ll be around quite a bit more.”

The four-acre property is set up to be quite zonkey-friendly.

“We have a very large pasture with a small slow-running ditch right inside the area so water is not an issue,” he said. “Plus, we move an electric fence to surround grassy areas that the zonkeys have chewed down, like what goats do.

Another portion of the property has a small pond where the zonkeys like to wallow,”

They are moved to a back pasture at night and more often in the winter, he added.

Most zonkeys are now seen in zoos or at private ranches and were also discussed in Charles Darwin’s “Origin of the Species” published in 1869.

Zebroids physically resemble their non-zebra parent but are striped like a zebra. Zonkeys are primarily either tan, brown or grey with a lighter underside and can reach three and a half to five feet tall, carry 500 to 700 pounds of weight and gallop up to 35 miles per hour.

Although usually calm, zonkeys are half wild and not very rideable, although that’s been tried with mixed results.

For fun, take a look at “Racing Stripes,” a 2005 American sports comedy film about Stripes, a circus zebra who is accidentally abandoned in Kentucky and raised on a farm next to a racetrack. Believing he is a racehorse, Stripes dreams of training for and competing. And he does.

From wideopenpets.com: “If you ever come across a zonkey in real life, you’re very

lucky. These zebra hybrids are rare but are totally fascinating examples of cross-breeding.”

Edgington’s zonkeys are a bit of a tourist draw, and he  doesn’t mind visitors coming to see the animals. “People walk or bicycle through here, and say they’re thrilled at the unusual sight and then take lots of pictures.”