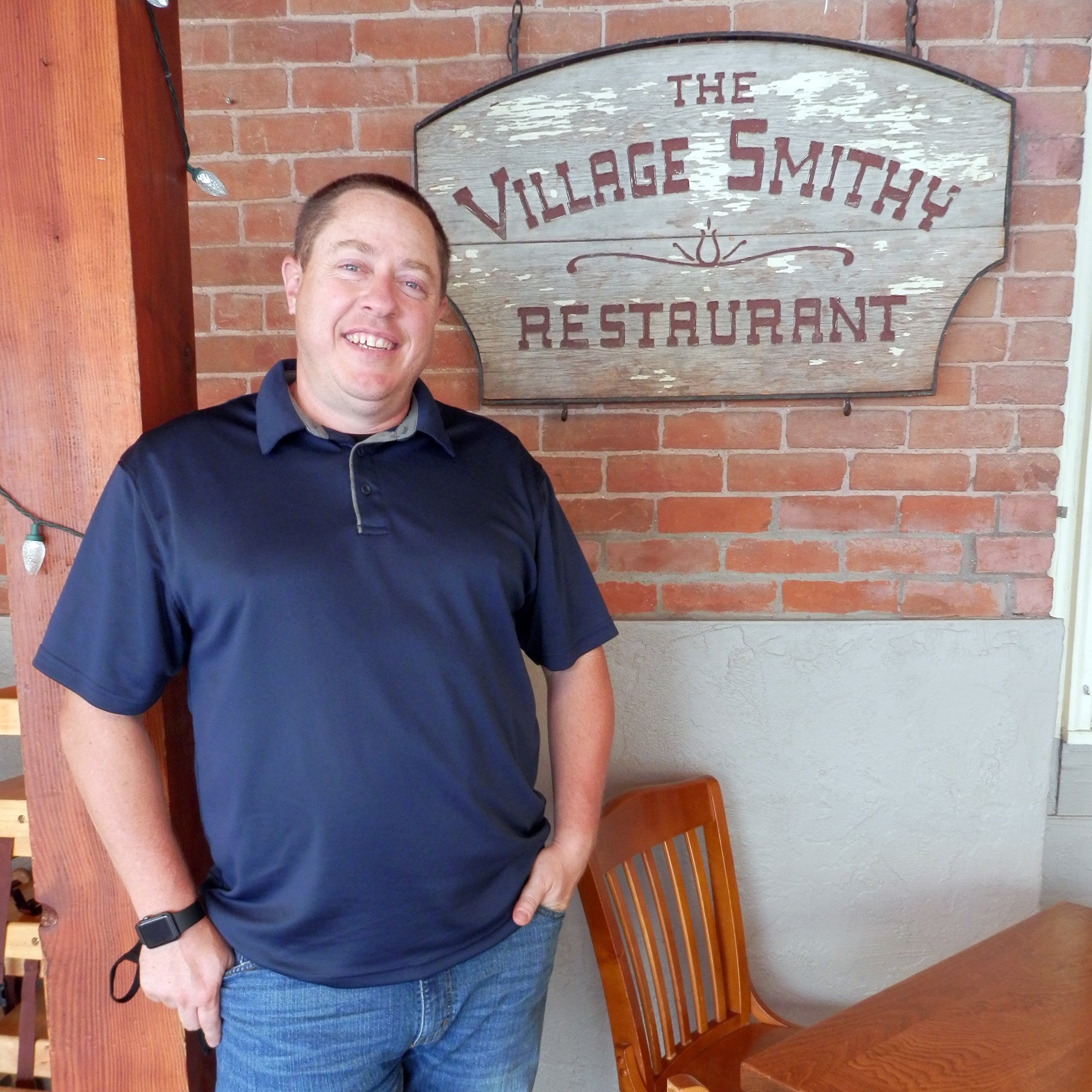 The Sopris Sun is conducting a series of interviews with folks you may not have seen in the paper before – a sort of introduction to your neighbors. This week we caught up with Jared Ettelson, General Manager & Co-owner of The Village Smithy. He holds your dining-fate in his hands as he records your name and party size in the Smithy’s seating order list. Don’t worry… it’s worth the wait.

Q: Where are you from originally?

Q: What originally brought you to Carbondale?

A: My Mom and step-dad both got jobs at Colorado Rocky Mountain School (CRMS). My step-dad was a music teacher at CRMS, and my mom worked there in administration. So, I’ve been here for 42 years. I went from kindergarten through high school here in Carbondale. It’s been good! My dad lived in a small town in Iowa, so growing up, I spent pretty much every summer in Iowa. He was also a high school teacher, and a wrestling and golf coach.

Q: Where did you attend college?

A: I went to Adams State College down in Alamosa for one year on a track scholarship. I competed in the high jump event. It was kind of interesting because, in college, at 5’ 10”, I was one of the shortest guys out there high jumping. We’d get to some of the track meets and I’d get out there to warm up with the other two high jumpers on the team (who were 6’4” and 6’6”), and I was a five foot, ten inch high jumper, and one of the shortest guys out there high jumping. I just didn’t fit in, but I enjoyed it. I loved that time down at Adams State College. Then, I decided I didn’t want to be four hours from everything, so I transferred to C.S.U. and I finished my degree there.

Q: Do you have any hobbies?

A: I like to fly fish and play golf. My favorite fishing spots are Avalanche Creek and Thompson Creek. I deal with people all day long, so I’m not going to go up the Frying Pan and have to fight for a spot on the river. I also play a lot of golf. Those are both my hobbies and recreation

Q: What are your favorite books, authors, or musicians?

A: This is going to sound funny, but I grew up around a lot of rap music, so The Beastie Boys were probably my all-time favorite music group. I’ve listened to them my entire life. As for books, the Beastie Boys came out with a book a couple of years ago chronicling their rise to fame, which is kind of amazing because, even though I’m not from the East Coast, their story about growing up in Queens, New York, and working in a predominantly black genre of music – that was fascinating to read about.

Q: Can you tell me something about yourself that might surprise Sopris Sun readers?

A: The fact that I went kindergarten through high school here in Carbondale, and my two daughters have done the same. My daughters have even had three or four of the same teachers that I had when I was in the Carbondale schools. That was kind of cool!

My younger daughter just graduated from Roaring Fork High School in Carbondale during the pandemic, and no one will ever forget that graduation. It was phenomenal. My older daughter was Head Girl and she helped run the event as emcee. The ceremony took place out in the school parking lot, and everybody sat in their cars with their car radios tuned into KDNK so they could hear the ceremony and speeches. And the ceremony was followed by a parade downtown. No one will ever forget that graduation! Now my older daughter who assisted with the high school graduation helps me manage The Smithy, and she’s been working for me for about four years.

Q: You always seem very calm when taking reservations, even when The Smithy is crazy-busy with people waiting both inside and out on the lawn. How do you do that?

A: I grew up in the restaurant industry on the corporate side. I opened up Johnny Carino’s restaurants in both Colorado and Texas for twelve years. It was a big corporate chain. They had about five restaurants when I started, and by the time I left they had 140 restaurants. They boomed really quick. I started off as a server, putting myself through school, and as soon as I graduated from Colorado State University, I began opening restaurants for them. So, I’ve moved a lot. One day, we had a regional director and a training director come into one of the restaurants I was preparing for opening (I think it was when I was opening the Grand Junction restaurant) and the Training Director looked me in the eye, and she knew I was really stressed out (my wife was 9 ½ months pregnant, and I was opening one of the biggest restaurants the company had ever established). Anyway, she looked me in the eye and she said, “Jared, it’s not a matter of life or death, it’s a matter of lunch and dinner.” She took that stress off my chest, and I’ve kind of kept it off my chest.

Q: How has COVID-19 affected The Village Smithy?

A: We were closed for about a month, from March 17 to April 11, and then we were “to go” only from April 11 until June 1, at which time we reopened dining at 50 percent  capacity. It was a little scary, you know – wondering what was going to happen, if and when we could open, and what that would look like. We knew the Smithy would have significantly reduced seating and a lot more sanitation practices than we were used to, so it was a whole new world for us. But so far everything is coming back around. We’re fortunate to be a 45-year-old restaurant with the clientele that comes with that — and to have such a fantastic town that rallied around us as well. We go out to other restaurants in town to try to keep things moving as well, because it’s important — you don’t want to be “the only kid on the block,” and it’s nice to have different restaurants and different styles. We’re fortunate to have been around for 45 years, and the clientele has just been great!