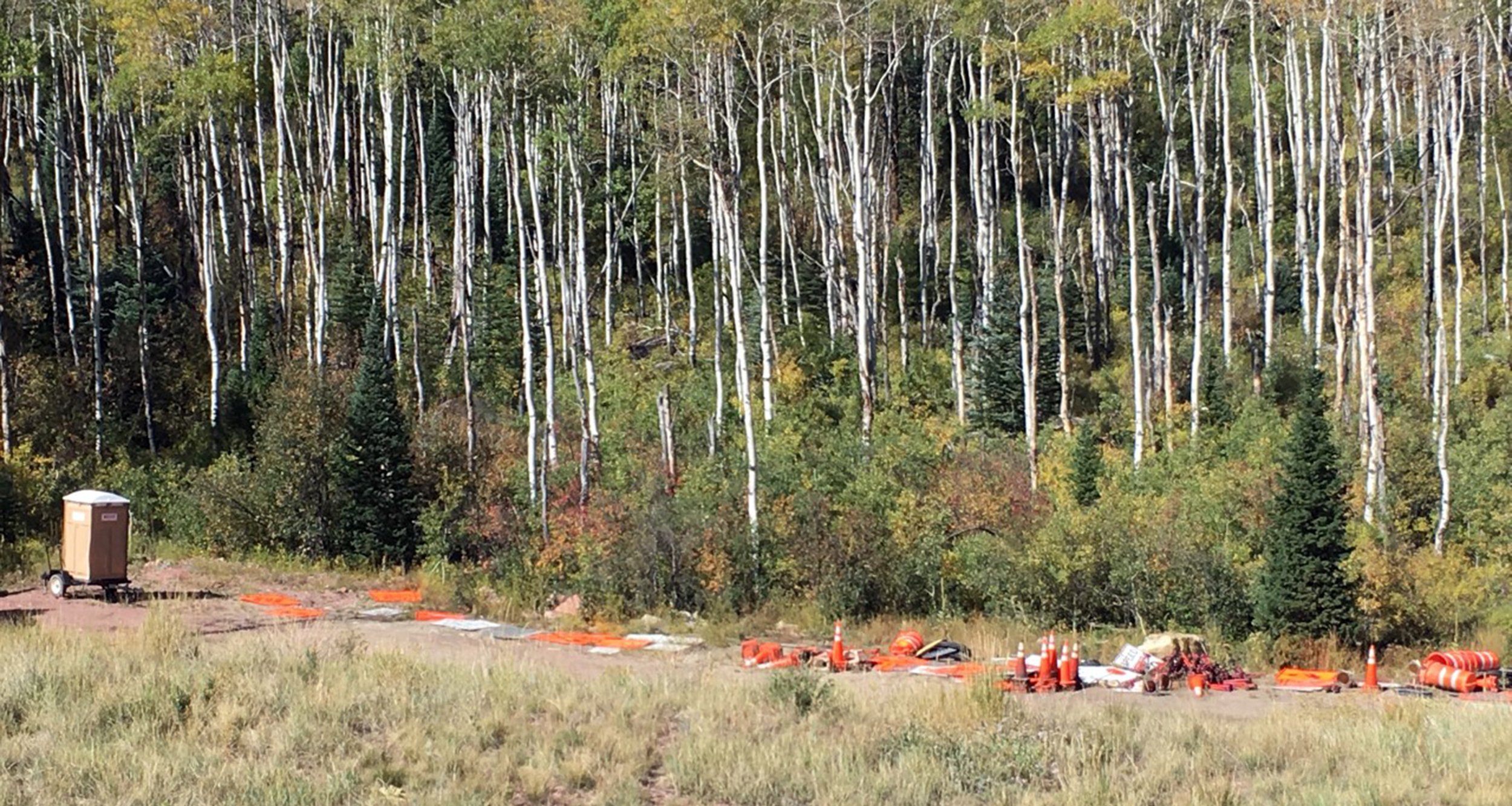 A berm to block roadside spoils from view remains incomplete, and tensions are high.

Some backstory: In 2007, the Crystal Valley Environmental Protection Association (CVEPA) noticed the Colorado Department of Transportation (CDOT) dumping rockfall and mudslide waste at Placita, a site off the McClure Pass road. The dumping was on public lands, and it concerned CVEPA because it was clearly visible from the highway and threatened the vulnerable Crystal River riparian zones.

“If you see something that doesn’t look right, it’s probably because it’s not, and you need to speak up,” CVEPA President John Armstrong said.

Indeed, the Forest Service was unaware that CDOT had been dumping roadside waste on public lands and ordered them to stop using the Placita site.

In 2009, CVEPA endorsed an alternative to the Placita site. “After a review of candidate sites for the upper Crystal, the inside of the horseshoe turn below the summit of McClure Pass was chosen for the next generation rock dump site,” CVEPA’s website read. This nine acre area is contained and across the highway from the Crystal River, making it less harmful to the environment than the previous dumping spot.

The site, named the Horseshoe Bend, needed an approved management plan and Environmental Assessment (EA) in order to become the new dumping site. This process took until 2016 to complete. A stipulation of the management plan was to decommission and revegetate the Placita site.

“When the management plan was finally ratified…we figured that there would be some action,”  Armstrong said. “[CDOT built] a little bit of the berm, which is basically a land mound that [goes]… between the highway and the horseshoe dump area.”

According to the management plan, the berm needs to be eight feet tall to adequately block the roadside spoils from view, but CDOT has yet to complete it since starting the project four years ago.

That hasn’t stopped dumping occurring on the site, however. “It’s a phased project. Nowhere in the decision notice or the EA does it state that they have to build the berm entirely prior to starting to utilize that one acre at a time that they’re filling,” Aspen-Sopris District Ranger Kevin Warner said.

“CDOT has not fulfilled their obligation of completing the berm,” Armstrong said. “They did start it, [but] it’s not to the heights or any of the specifications that are in the management plan.” He is adamant about the berm being the correct height, as the area is part of the West Elk Scenic Byway — a place where one wouldn’t expect to see discarded waste on the side of the road.

“Last summer I noticed [CDOT] had hauled in dozens of loads of more organic soil… I was encouraged by that,” Armstrong continued, as soil is used to build berms. “Then they just bulldozed it into the other landslide spoils.”

Armstrong contacted the Forest Service to ask about that action, and around the same time, CDOT reopened the original dumping site at Placita. “They started dumping early summer, maybe even late spring of last year. By management plan, that site was to be decommissioned and revegetated,” he said. “I also informed the Forest Service about that and they didn’t know, and they told [CDOT] to cease the dumping there.”

“On our end, we have worked with [CDOT] recently to ensure that there is no more dumping occurring at the Placita site,” said Warner.

Today, the Horseshoe Bend berm remains incomplete. This June, Armstrong contacted the Forest Service again to tell them CVEPA was disappointed there had been no movement or compliance with the management plan. “We really don’t know what to do next and where the disconnect is. …We’ve contacted the Forest Service as recently as six weeks [ago], and they said that they were in conversation with CDOT, but still nothing has been done.”

CDOT did not respond to inquiries for this article. “We understand that now it’s the pandemic… we’re sensitive to that, but we really feel that 13 years is too long,” Armstrong said.

His frustration stems from the fact that relatively little effort is needed to complete the project.

“What they need to do is [get] some decent soil, build the berm to the eight foot specified height, and then revegetate it,” Armstrong said. “We’ve offered to try and get together a volunteer crew for revegetation as well …The solution is pretty simple.”

Warner said that the berm is “a multi-phase thing [and] we never expected that they would do it all at one time.”

Armstrong stressed the great respect CVEPA has for CDOT and the Forest Service. “What we want to do is work together… and not [have] an antagonistic relationship,” he said. “But we think that it’s time. It’s overtime.”