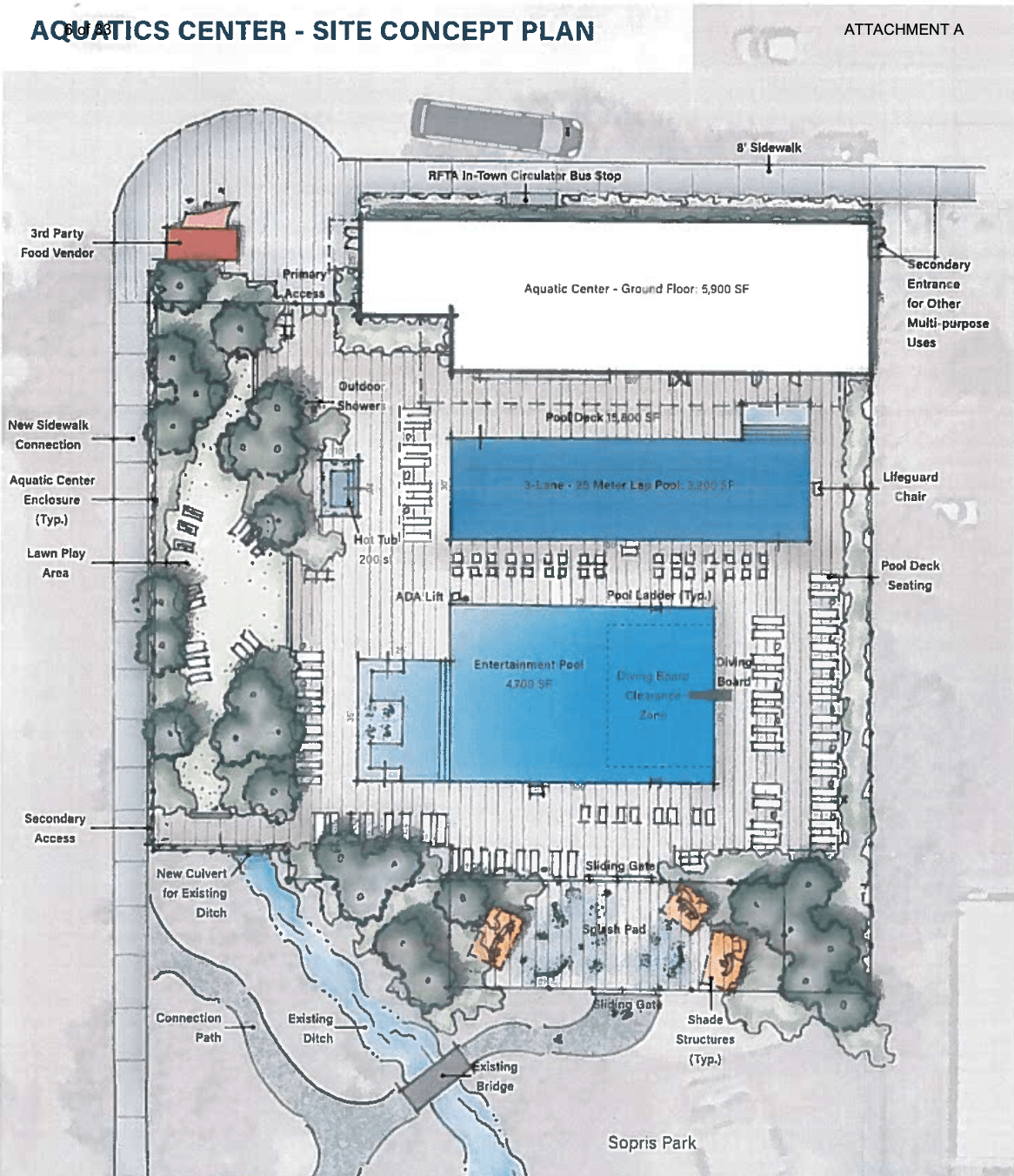 The John M. Fleet Pool probably won’t be replaced by a year-round water park, but a vision for a ground-up overhaul is beginning to take shape.

The result of a two-day design charette with a working group of users was presented to trustees on Sept. 15, with Design Workshop’s Darla Callaway encouraging them to see the design as kit parts that could be moved around. The proposal comes with a pair of pools in an east/west configuration (to ease glare for lifeguards), a hot tub, a larger (potentially two-story, multi-use) bathhouse, a better connection to Sopris Park and a third-party (potentially rotating) food vendor.

At its Sept. 9 meeting, the Parks and Recreation Commission had expressed hopes that the final plan would be environmentally sustainable — with plenty of bike parking — and incorporate the arts. Faced with the potential choice between a slide and a diving board they favored the former, and debated the merits of placing the “splash pad” next to Sopris Park or along Eighth Street.

The trustees were more interested in one of the most fundamental questions: where the facility should be.

A spring survey of the public — originally intended as just one phase of community outreach, but luckily seeing strong participation during quarantine — offered the possibility of locating it behind the Carbondale Rec. Center. Roughly half of respondents liked that idea, with the remainder split between the existing location and no preference.

But the potential move proved more complicated than anticipated. The alternate location is 12 years into a 25-year grant contract with Great Outdoors Colorado. While that could potentially be renegotiated, it might be more desirable for an expansion of the rec. center itself — which will have its own bonds paid off in 2024.

As commission member Hollis Sutherland observed, “When people find out that I’m on Parks & Rec., the first thing they say is that the Rec. Center’s too small.”

She also noted the potential noise impact on neighbors, who have already expressed concerns about public and private events at the existing facility.

And while Trustee Heather Henry proposed taking some space from the lightly-used back lot, Parks and Rec. Director Eric Brendlinger pointed out that unofficial parking on a private lot across the street may not be available for much longer. Besides, he seemed pleased with the plan.

“When you go in with a municipal pool in mind, our park space is really a gem of location,” he noted.

The only other hangup, at least for Trustee Ben Bohmfalk, was undergrounding the ditch along the west side of the existing property, but Callaway explained that health and safety requirements made it next to impossible to leave it open and within the facility.

In general, she explained, a lot of decisions came down to basic practicality.

“The size of the pool and the shape of the pool all have cost implications,” she said. “Let’s put the money where it matters most in terms of programming.”

But that doesn’t mean there isn’t cause for excitement. The pair of pools not only roughly doubles swim capacity, it allows for lap swimmers and loungers to benefit from different temperatures. The second level of the bathhouse could offer housing or, as Trustee Marty Silverstein suggested, a classroom. Silverstein also joined Lani Kitching in advocating for programming and hours for the aging population. And the splash pad’s status as “water in transit” means it could be open without a lifeguard — effectively extending the hours and days of use.

The desire to have the new facility open for more of the year was tempered somewhat by the desire for sustainability, with Mayor Dan Richardson foreseeing “an arm-wrestling match between an extended season and a net-zero pool.”

Meanwhile, the next step is to assess the potential cost of the project and identify sources of funding.

“When you open up a survey to the public, you’re going to get a lot of dreams, but now we have to break it down into reality,” Brendlinger explained. “We’ll go after some grants like we always do, but it will probably require a bond, which would require a vote of the people.”

So don’t expect much action before November 2021.