Sharing history from a woman’s perspective 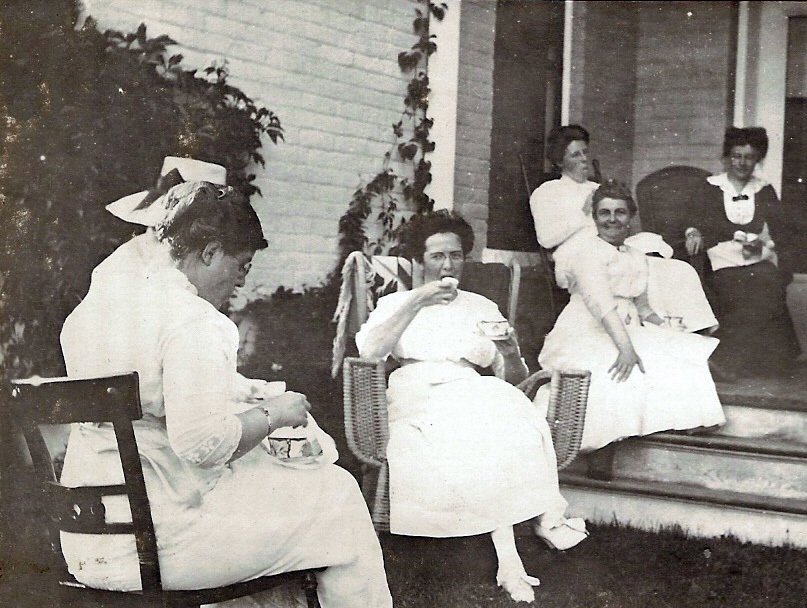 Men may have built this town, but women built the community.

That’s a lesson Sue Gray of the Carbondale Historical Society hopes will come through loud and clear across five first-person stories being recorded and shared in the lead-up to Potato Day.

“We wanted to tell women’s stories, which are a side of history we rarely hear. It’s also a way to tell Carbondale history from a different perspective,” she explained. “The historical society has been wanting to produce a history of Carbondale from its beginning to its present for a while now. These stories really show how women’s roles have changed in society over the last 150 years.”

While excerpts of each are aired on Express Yourself at 4 p.m. Fridays on KDNK, you’ll want to visit carbondalehistory.org for the full story. Chronologically, it all starts with Charlotte Graham’s researched and Ute-vetted view of a native woman. Next, Jackie Chenoweth stands in for Edna Sweet in a pioneer perspective and Dorthea Farris represents Mary Ferguson’s experience of the early years. Sue Anschutz-Rodgers speaks for herself as a rancher and Laurie Loeb will look back on her impact on the arts.

The pieces on Sweet and Ferguson were the first completed and broadcast, which seems apt, as both were instrumental in chronicling Carbondale  — the latter on KDNK itself.

“Those two women especially were very much into history, and that’s why they’re such rich resources for us,” Gray noted.

So it seems only fair that we share their stories more or less in their own words.

was one of Carbondale’s early pioneers. She lived here from the age of 13 in 1885 to her death at 82 in 1954. She published a book in 1947 called “Carbondale Pioneers – 1879 to 1890, which is one of the Carbondale Historical Society’s most valuable research materials.

As settlers arrived near the small cabin our father had built, a town was formed at the confluence of the two rivers, named Cooperton for its founder Isaac Cooper, later called Satank. The first school I attended was in a little log building near the Satank bridge.

Those were quiet peaceful years. The soil produced wonderful gardens, entirely free of weeds, which came only with civilization. The streams were full of trout and the mountains abounded in game of all kinds. We depended on venison for meat, which my father hunted during the winter when the deer came down to the valley.

Everybody rode horseback, and we took camping trips into the mountains, where we found an abundance of wild raspberries, black currants for jelly and service berries.

After Issac Cooper died, the town of Cooperton faded back somewhat, while a mile to the east, a new town was springing up, which was later to become Carbondale.

In the fall of 1887, my father took me to boarding school in Aspen. When I returned home at Christmas time there was a transformation. I was surprised to see the town had doubled in size. Carbondale was incorporated in 1888, named for the hometown in Pennsylvania, of Ellery Johnson, who had the townsite surveyed.

Two railroads had reached Carbondale and were continuing to lay tracks up to Aspen: the Denver and Rio Grande, and the Midland. Another railroad was building from Carbondale up the Crystal to handle the coal.

Those were wild days. The coal mining camps of Marion and Spring Gulch were running at full blast and the miners came down to Carbondale to spend their money. There were 15 saloons, and some poor unfortunate soul was rolled every night for his money.

After I graduated I became a school teacher, but when I I met Frank Sweet and married in 1895, I gave up teaching, because married women were not generally allowed to teach, or to hold any job that took her away from her family. Since Frank and I had five children, I didn’t miss it all that much. My dear baby Irene lived less than a year, and is buried in the family plot in Hillcrest Cemetery on White Hill.

I am proud to say that I was a founding member of the Carbondale Study Club, formed in 1898 by several prominent Carbondale women. We read the latest fiction and periodicals, and chose topics to discuss at our monthly meetings, such as home economics, scientific discoveries, and conservation of natural resources.

The Study Club labored always for improvement of the community. We helped maintain a community house for the poor, assisted in school clinics, and planted trees around Hillcrest Cemetery.

After Frank died suddenly in 1932, I began an effort to collect the stories of the pioneer families.

When I view our little village, lying so peacefully at the foot of Mount Sopris, with its beautiful homes, trees and flowers, then go back in memory to my first glance of the treeless desert, I feel this is, indeed, one of the scenic spots of the world, worth all the toil, strife and tears that went into the building of it.

was born in Spring Gulch in 1906, and was an elementary school teacher in Carbondale for 27 years. She lived from the horse and buggy era to the space age. She died in Carbondale in 1999 at the age of 92.

My parents, John and Marianna were from the Austrian-Hungary border, what later became Yugoslavia. They came here for a better life, like all immigrants.

Spring Gulch was a coal mining town on the west mesa above Carbondale, run by the Colorado Fuel and Iron Company. Most of the men in camp worked the mine, but my parents were farmers, and homesteaded a small piece of land on Thompson Creek. But when the mine closed in 1916 all of the families moved out and the place became a ghost town.

I came to live in Carbondale when I was in the seventh grade, around 1918. The one-room school we attended had no auditorium or gymnasium, so we used the Odd Fellows Hall on the corner of Fourth and Main Street, where the Near New Store is now. That’s where we had assemblies, graduation, and even basketball games.

I was 20 when I married Melvin Ferguson in 1927. Everyone called him Jack. We had four sons: Harvey, Kory, Richard and Melvin, whom everyone called “Fergie.”  It was the Great Depression and things were hard, but we managed to make a living and raise our family.

I taught four or five generations in Carbondale. Children are great. The greatest! They can build you up or mow you down. Never underestimate them.

At potato harvest time in the fall, all the kids would be let out of school for a few days or a week to help pick potatoes. When I got older, I helped out with the Potato Day organization, when the Sorority sisters took over the planning. I was even crowned Potato Queen one year!

We left for a few years during World War II, and by the time we came back most families around Carbondale ran cattle, because potatoes had become so popular in the United States that the business outgrew our little valley and had moved to Idaho.

I did a lot of charity work, but for the most part I was a wife, mother and a teacher. When Jack died in 1970, I became more active in the community.  I joined the Retired and Senior Persons Volunteer Program (RSVP) and later, sat on the board of the Senior Housing Authority. I helped out at the Near New, and with all of the other charitable activities we did in the community, especially with supporting the local schools.

I ran for city council in 1984, because I think senior citizens should be involved in local government and I don’t think the town council should be all male. I lost by four votes, but I managed to get a lot of seniors interested. A few months later I was appointed anyway, to fill a vacant seat. I guess I did such a good job that I won the next election, and served on the council for two terms.

In 1986, I helped found the historical society, so we could collect all of the stories and artifacts for future generations to study.

I was also very interested in the downtown Main Street buildings, so I started compiling a history of all of the businesses housed in each building. We got plaques made for some of them and I led historical walking tours of Main Street.

I wanted to collect the stories of the old-timers as well, and in 1989, when I was 83 years old, I started a radio program on KDNK, which was then operating out of the Dinkel Building. The show was one hour on Sunday evening. It was called “This I Remember,” and I interviewed the local seniors about their memories and the history of the area.

I have watched Carbondale grow – its good years and not so good. The past is a stepping stone to the future and Carbondale has a great future, if we have the intelligence, integrity and tenacity to do the very best we know how, to make it great.