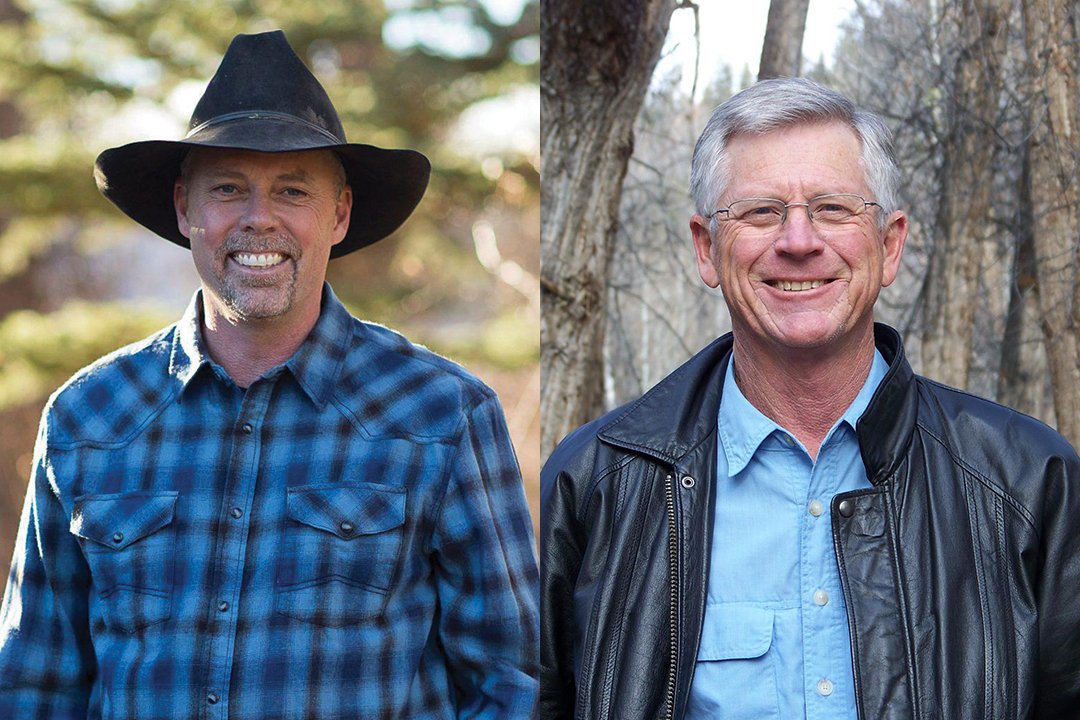 The race for Colorado State Senate 8th’s District seat is heating up following the Club 20 debates on Sept. 19. Challenger Karl Hanlon and incumbent Senator Bob Rankin faced off on issues ranging from healthcare to the electoral college. The Sopris Sun caught up with the two in the days following the debate and asked some questions that were not covered during the match.

Incumbent Senator Bob Rankin grew up in Mississippi He studied electrical engineering in college then joined the Reserve Officers’ Training Corps (ROTC) where he honed his education which he subsequently applied to a career in technological defense and computer science. After retirement, he moved to the Valley and has lived in the Carbondale area for just shy of 20 years.

In the early 2000s Rankin started the Carbondale nonprofit “Computers for Kids” — now known as ‘Youthentity’ — which initially offered technology workshops for students interested in that career field.

In terms of energy Rankin stated, “Colorado has taken some extreme measures that I believe are driven by politics and that hurt people by accelerating the closure of coal mines,” and natural gas wells.

“I certainly don’t object to transitioning to renewable energy, but I want to make sure that what we do really will make a difference” said Rankin. “What I want to do is make sure that we don’t unnecessarily accelerate the loss of jobs.”

When it comes to the COVID-19 response he expressed his discontent that, “The Governor through the extension of emergency declaration is running the state by executive order — including spending all of the federal relief money.” He continued, “I believe that the legislature, through the joint budget committee, should be involved in spending that money.” Rankin is a senior member of the joint budget committee.

“I voted for senate bill (SB) 217 (Enhance Law Enforcement Integrity) and I believe that we have more work to do on that,” Rankin said. “I want to make sure that the reforms that we put in place really can be implemented by the town police departments.” Rankin supports the requirement in SB 217  that law enforcement wear body cameras.

When it comes to people living without legal documentation in his district Rankin sated, “I feel like I represent all the people who live in my district whether or not they vote,” and continued, “I believe in the rule of law but at the same time these people are part of our community and they live here and we should understand what they’re contributing.”

Karl Hanlon grew up on a ranch in Jackson County, CO and considers himself a “dirt road democrat.” He studied at the University of Wyoming as an undergraduate and attended Lewis and Clark College in Portland in pursuit of a career in environmental law. Between degrees, the young man served as a seasonal ranger after graduating from the Law Enforcement Academy in Rangely, CO.

Hanlon came to the area roughly 25 years ago and began working in water law — a passion of his. He has served as the city attorney for Glenwood Springs for several years as well.

Along with his wife, Cheryl Hanlon, the two started Smiling Goat Ranch in Carbondale: an equine therapy non-profit for folks with Autism and veterans suffering from PTSD.

“One of the big areas that I want to focus on is how we are transitioning away from coal and natural gas development in Western Garfield, Rio Blanco and Moffat counties,” Hanlon stated.

RegardingCOVID-19, Hanlon said we cannot go through a complete shutdown again and need to continue to reopen while, “Relying on science to do so safely.” He’d like to see the state continue to apply pressure on the federal government to pass another stimulus bill to bolster the local economy.

When it comes to police reform, Hanlon sees the onus on law enforcement as being too high and would like to see more resources — including mental health professionals — allocated to assist with a myriad of societal issues which law enforcement has historically taken on.

While immigration policy is set at the federal level, Hanlon said that, “we can make it safe for people to be at public buildings,” without fear of being deported. He also takes issue with applicants having to indicate legal status to obtain benefits.

“Right now in this COVID world that we’re in, I think we have to recognize that we are all a part of a community and everyone in that community matters,” Hanlon said, “To me our legislative policy should reflect the fact that all of those community members matter — that’s the bottom line.”