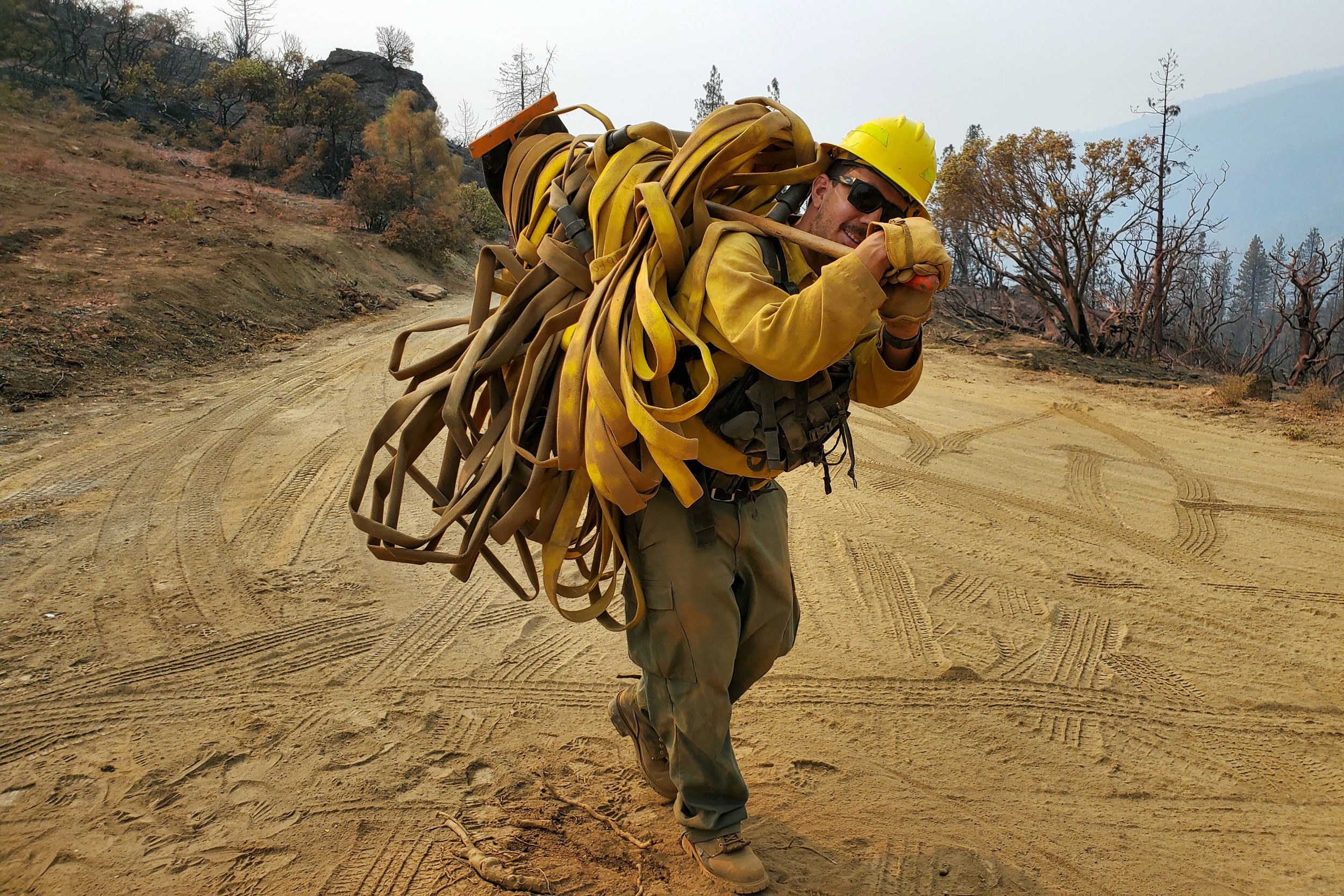 So far in 2020, California has lost over four million acres to ravenous wildfires.

According to NBC News, this “more than doubles the previous record.” The grim data so far shows 31 people, including a Texas firefighter, were killed and more than 8,687 structures were lost. But the Golden State has only so many firefighters and fire equipment, and for these fast growing infernos outside help was critical. NBC also reported that approximately 20,000 firefighters from across the nation and around the world have come to help — including the Carbondale & Rural Fire Protection District.

Fire Chief Rob Goodwin explained, “The federal government has developed a consistent system to help fight large and numerous fires.”
It works both ways, Goodwin pointed out. Over a thousand firefighters traveled from out-of-state to help fight the Grizzly Creek Fire and a substantial number at the Pine Gulch Fire.

Goodwin said Perkins, a 14-year veteran firefighter, “Is amazing. He is passionate about fighting wildland fires, and he is one of our outstanding crew.”

“We participate in this network because we want to help our neighbors,” Goodwin stated.

When asked what he’d like to modify in the deployment system, Perkins responded, “We’d like to spend more time with the other firefighters and build strong relationships.”

Evans noted that this was his first deployment to another community’s fire situation.

Gandolfo has been with Carbondale since 2012, full time from 2015 and has been deployed before.

He explained, “The way that Colorado transfers command to teams seems to be a bit more fluid here in Colorado. From what I have seen, Colorado fire departments are used to working with mutual aid agreements, so working with other resources seems more natural and communications, more universal. “

Gandolfo also noted , “California has a state run fire department, Colorado has fire departments and fire protection districts and relies on volunteers to help fill the voids of paid firefighters in the rural areas.

Topography is much different and the flora and fauna are different. The area we were in was rather rugged and steep. California has a far longer growing season, and the climate is much different, therefore the fuels that are available for fire growth and spread vary. Part of the preparedness plan is to identify the firefighters across the country and world who

are certified wildland firefighters. According to the National Park Service, it relies on a federal Incident Qualification Card, commonly called a Red Card, to determine if a firefighter is certified to handle job requirements when deployed to major wildfires.
Perkins and the other firefighters were deployed to the Mendocino Fire, which morphed into the huge August Complex Fire in the Coast Range of Northern California. This area includes Glenn, Lake, Mendocino, Tehama, and Trinity counties.
This complex fire started burning mid-August which began as 38 separate fires ignited by lightning strikes, according to the San Francisco Chronicle.
California Department of Forestry and Fire Protection recently reported the August Complex fire is 58 percent contained and the affected area includes California counties Mendocino, Humboldt, Trinity, Tehama, Glenn, Lake and Colusa.

Chief Goodwin affirmed California covers all costs for essentials at the basecamp. Also, the Carbondale group drove one of the district’s fire trucks to the site.

“We deploy firefighters from our district only if everything here is safe and under control,” Goodwin stressed.

The Carbondale and Roaring Fork Valley communities, Perkins added, “Have been great.  Support is astounding.”

Garfield, Eagle and Pitkin counties have set up emergency notification systems. Residents need to sign up at the garco911.com, pitkincounty.com or eaglecounty.us depending on their home county.