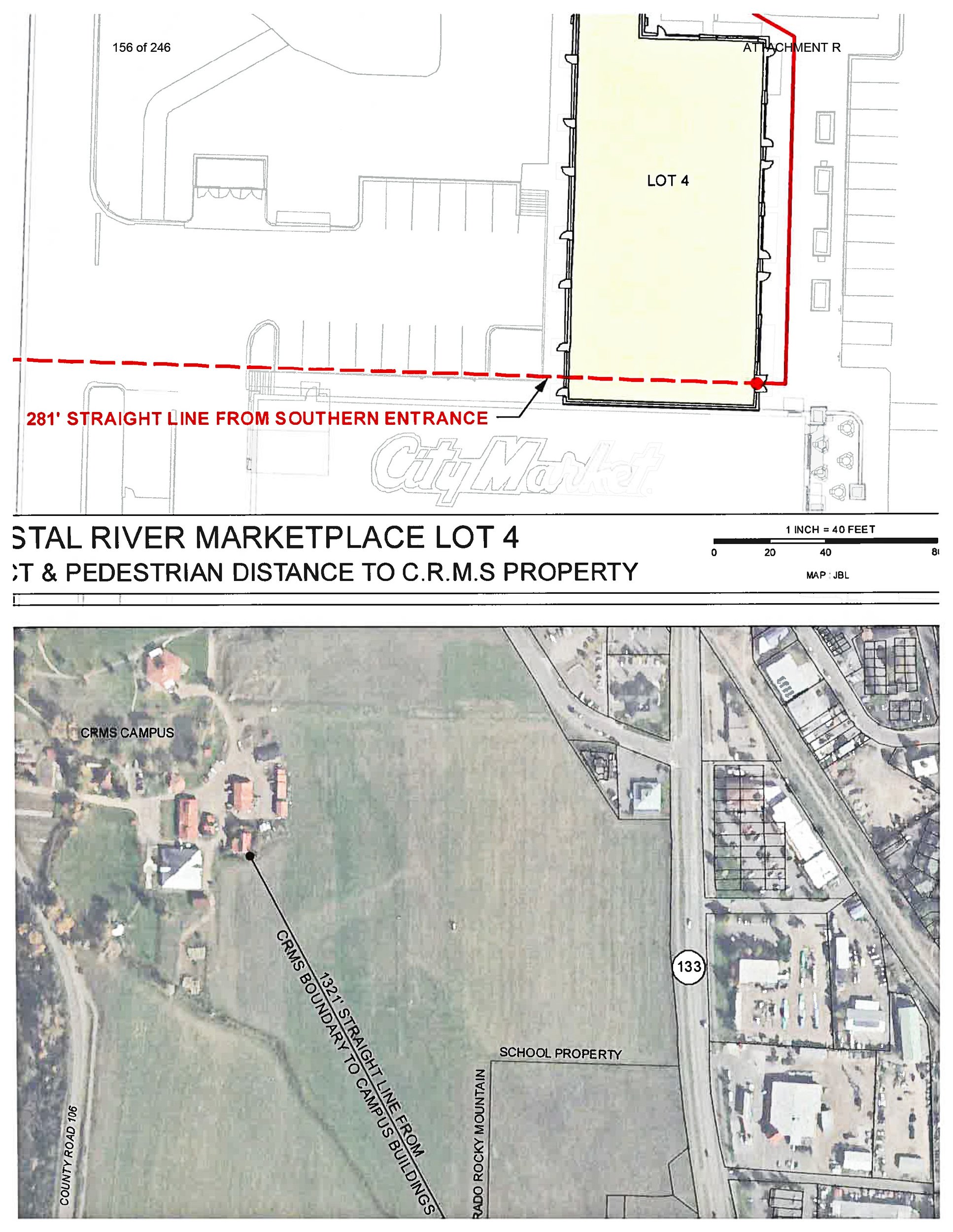 When the new City Market opened, customers were dismayed to discover that the beer they’d grown used to seeing on grocery shelves was no longer available. And when restaurateurs began to consider the complex, they were similarly surprised to learn that it might be unusually difficult to procure a liquor license there.

That’s because the property backs up to — and was originally carved out of — agricultural land owned by Colorado Rocky Mountain School (CRMS). And municipal ordinances — pulled directly from state law — prohibit liquor sales within 500 feet of a school property line.

Developer Briston Peterson approached the Town with a solution: measure the distance from the nearest school building instead. That’s how Ordinance 15 ended up before trustees on Nov. 10, with staff recommending approval.

But it proved less than a slam dunk. The item attracted extensive public comment on both sides. One frequently cited document was a letter from CRMS Finance Director Joe White. While the school did not directly oppose the proposal as the land is leased to local ranchers, it does occasionally use the property for its ranch program and could conceivably construct anything from athletic fields to employee housing to greenhouses on it in the future.

“Our hope and expectation is that administrative decisions, licensing and land use on adjacent parcels will not result in limiting future use by CRMS of its land to advance its educational mission,” he wrote.

And while that didn’t appear to be an issue, the flip side meant that the school could conceivably end up constructing a dorm just over the fence from an established liquor store, with no recourse for the Town to rectify the situation.

The opposition pointed out that the developers should have been aware of the restrictions from the beginning, with several local liquor store owners complaining about the double standard.

“Business owners in Carbondale have all lived with this law and adjusted our business decisions accordingly for years,” noted Sopris Liquor & Wine’s Kiko Peña. “All we hear from the Town is ‘stick together; support small business. Don’t turn your back on us now just because corporate America is staring you down.”

Most of the ire was focused on City Market, with fewer concerns expressed about either competition or potential underage sales from restaurants.

Kevin Jones said he was looking at expanding New York Pizza into the complex, noting that Carbondale is “a vibrant community and a place I’d like to join.”

But, Michael Zhang of Ming’s pointed out, what’s the motive to move if it handicaps the business?

“I don’t want to be one of the few restaurants in Carbondale without a liquor license,” he said.

With the discussion well over its allotted time, trustee Luis Yllanes considered the issue too complex to resolve that night and pushed to have it tabled for another meeting.

While the rest of the board was amenable to that, they did take the opportunity to address some of the public comments first.

“I think you should call it like it is — you don’t want City Market to sell beer,” Erica Sparhawk asserted. “I’m kinda surprised by the doomsday language that all of a sudden our youth are going to be walking around with bottles of booze.”

For her part, Heather Henry questions staff’s assertion that the issue required a town-wide ordinance rather than simply being handled on a case-by-case basis. Staff were instructed to conduct more research on that topic, as well as exemptions granted elsewhere — such as near Glenwood Springs High School — and the topic was slated for the Dec. 8 meeting.