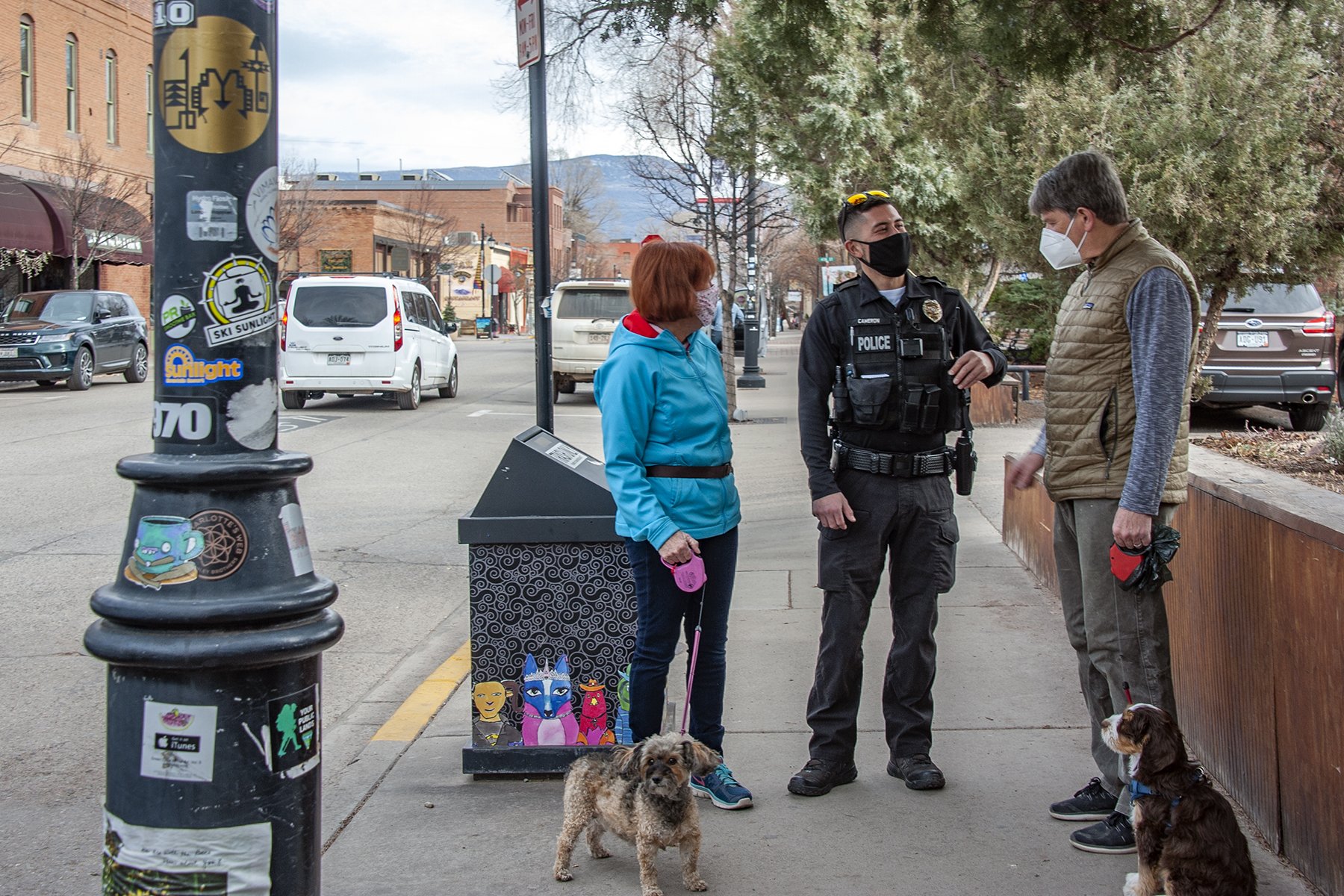 As part of the Carbondale Police Department’s emphasis on community engagement, Officer Cameron Herrera takes time while on foot patrol to chat with locals Peg and K.C. Nau and their pups. Photo by Roberta McGowan

As Garfield County struggles to contain the pandemic, both the public health department and the Carbondale Police are determined to convince everyone to respect the ordinances and guidelines now in place.

Police Chief Kirk Wilson said, “We respond to calls about violations, but our goal is compliance, not just writing tickets.”

Wilson, who serves on the Carbondale Emergency Task Force (CETF) noted “Everyone is really worried. Especially now when people are staying indoors because of the cold.”

Carbondale ordinances require people to wear masks when indoors and outdoors. People need to maintain a six-foot social distance perimeter at all times. Most government buildings remain closed to the public.

Restaurants and most other businesses must limit occupancy to 25 percent of maximum occupancy. Private gatherings are limited to 10 people from no more than two different households.

Garfield County Public Health orders now limit to 25 percent the number of workers in office locations with remote work encouraged. Fines of $50 or more can be levied against violators for a first offense, and increase for continued violations. Go to garfield-county.com/public-health for the list of current regulations or call 970-945-6614 for assistance.

So, what does the police do if someone reports a violation?

“It has happened a few times,” Wilson said. “We go to the business and remind employees about what Carbondale ordinance requires.”

“Ninety-nine percent of businesses say, ‘Thanks for the reminder.’  Most Carbondale store owners ‘get it.’”

He reminded residents the department will go back to an involved business several times before escalating the situation to the county.

But, if a business doesn’t comply, the department can call the Garfield County Department of Public Health, which Wilson explained,” has a lot of leverage.” Including, Wilson said, the ability to shut down a business. Fortunately, Wilson said, “We have not had to do that.”

When responding to the question of what should people do if they run into belligerent individuals, Wilson stressed, ”Let it go. Don’t confront someone.”

Colorado law permits county attorneys to bring a civil or criminal action if requested by the local public health department.

Public Health Specialist Carrie Goodes reported case investigators are now beyond their capabilities with over 50 cases per day.

“We are now prioritizing case investigations based on age and occupation (if known) and potential outbreaks (if known), schools and childcare,” she emphasized.

Goodes underscored the department cares about the health and welfare of all residents, and

Garco maintains a rotation of 13 contract tracers through the Garfield County Consumer Protection Team with four on call 24/7.

In an emergency, Wilson reminded residents to call 911.

Colorado Department of Public Health and Environment (CDPHE) has recently moved Garfield County to the high-risk, orange category after a spike in cases. Currently the state reported 188,566 total confirmed cases with deaths attributed to the virus reaching 2,355 in total.

CDPHE officials announced that cases are skyrocketing and shutdowns could be looming. The health department urged people who have been exposed to the virus to self-quarantine four 14 days and wait five to seven days prior to being tested.

People who have tested positive and have mild symptoms including fever or chills, fatigue, loss of taste or smell, shortness of breath, nausea or vomiting should isolate themselves for 14 days. Also, they should wait until their symptoms are lessening and have had no fever for at least 24 hours (without using medicine that reduces fevers) before ending their isolation.