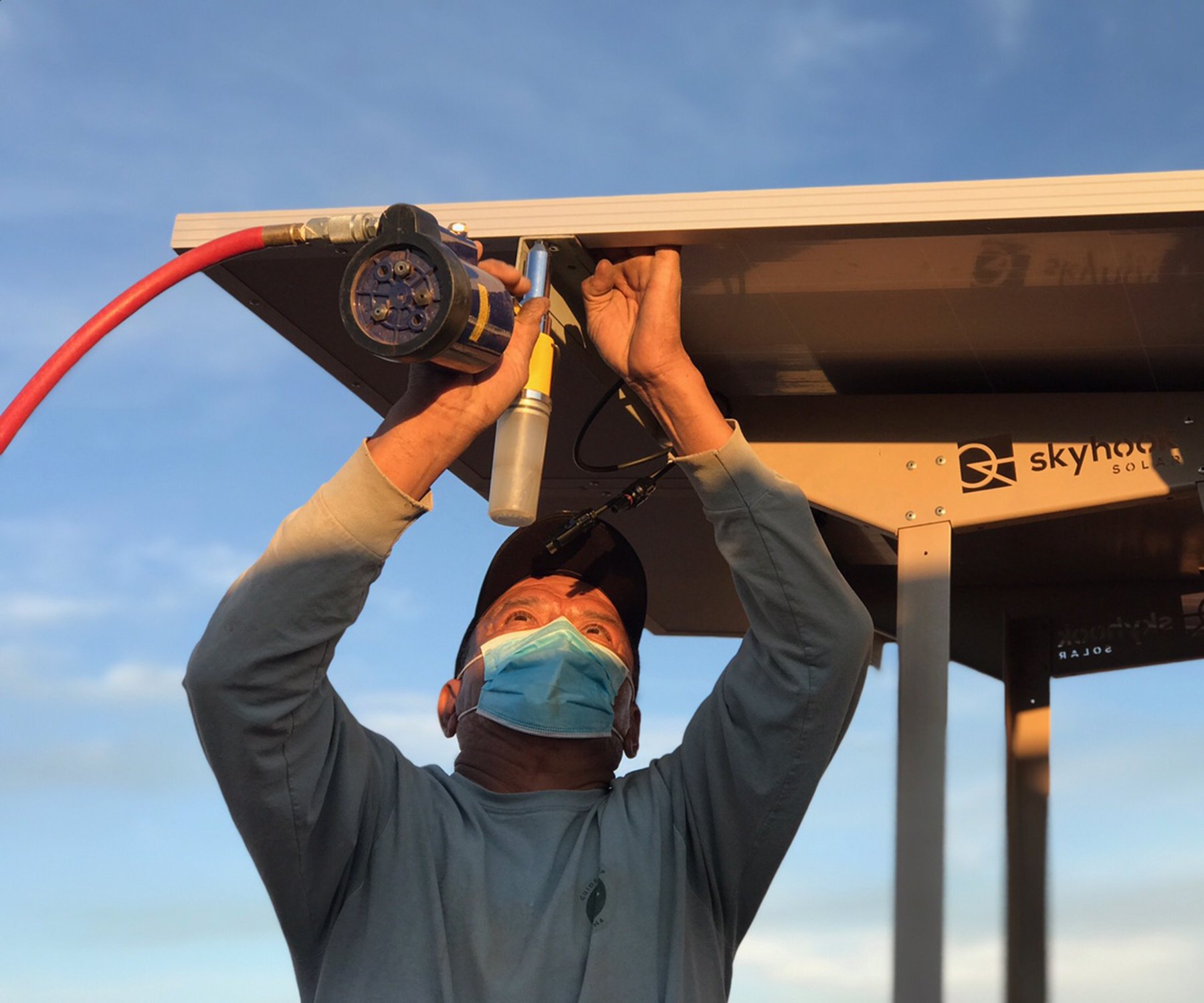 Peshlakai's life partner, Glen Peaches, was there every step of the way, learning about the stations so he can teach others. Photo courtesy of Jill Steindler 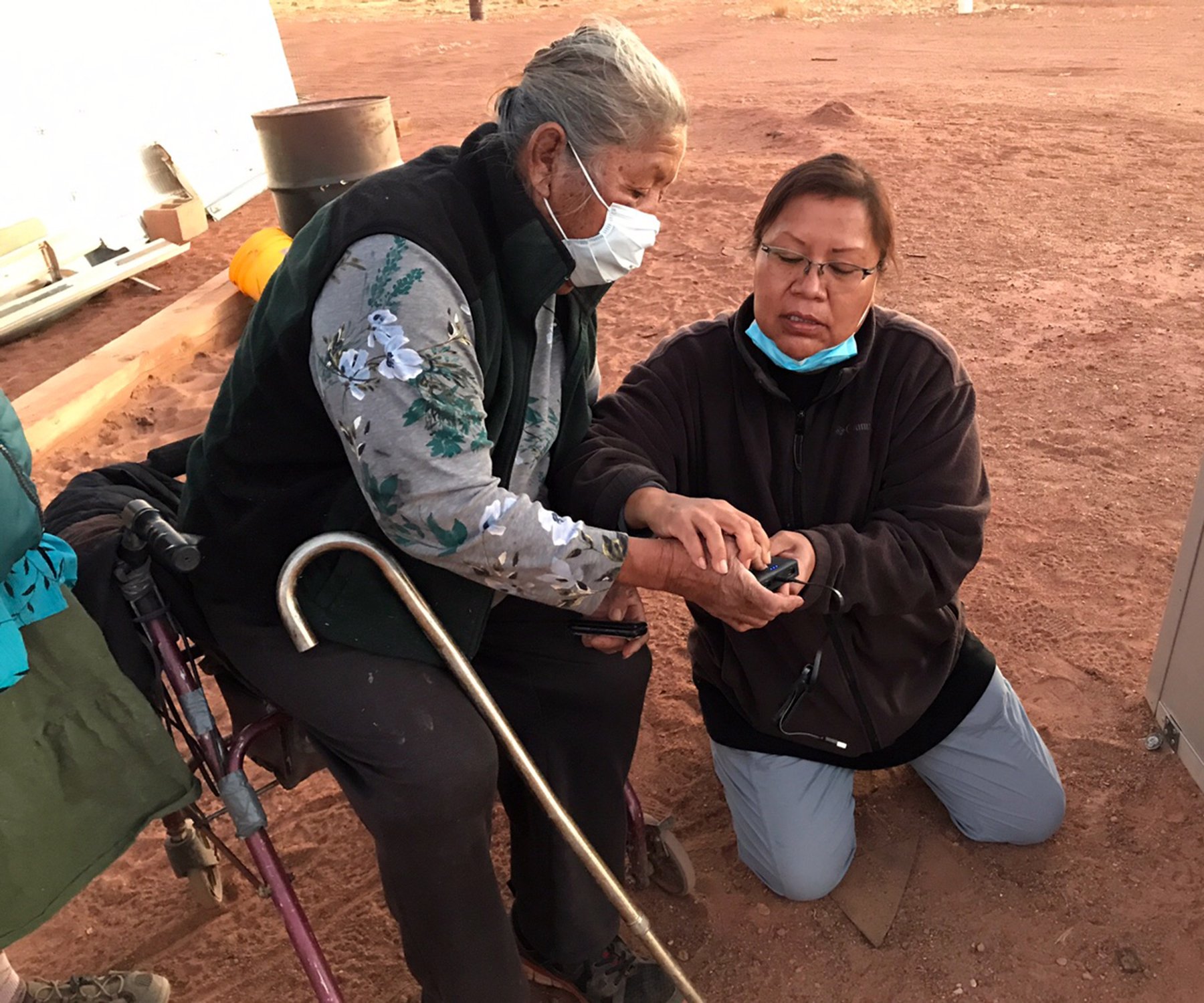 This story reaches for the essence of what the Thanksgiving tradition has been propagated as in the United States: people of North American and European descent coming together. While a union of both cultures is a tale some choose to believe, most agree that that was not originally the case. The forthcoming narrative describes an instance where perhaps some merit can be garnered for this centuries-old tradition.

Jamescita (or Tina) Peshlakai was born and raised in the Navajo Nation which spans more than 27,000 square miles – roughly the size of West Virginia. It is the largest Native American reservation in the United States. Peshlakai lives in her ancestral homeland, “Where I grew up herding  sheep, taking care of the family cattle and ranching,” she recalled.

Peshlakai also happens to have a connection with Carbondale in that she attended Colorado Rocky Mountain School (CRMS); as did two of her daughters. She still shares a bond with many people from this  community.

Today, Peshlakai is a senator in the Arizona legislature — a post she’s held for three terms. She lives on the reservation outside  Cameron, AZ not far from where she grew up. Several families make up a community there which is sparsely spread out over desert terrain. “Housing kind of occurs in family clusters in these remote areas,” Peshlakai explained, “So in one homestead area you’ll find 5-10 individual homes of different family members within a mile of each other.”

On top of having to haul water — typically a 60-80 mile round trip — “A lot of people don’t have electricity,” there Peshlakai explained, “So homes are warmed by woodstoves and light is provided by kerosene or butane lighting.”

With school having transitioned to online learning students and their parents travel great distances for an internet connection and, “A lot of children have fallen behind,” she explained.

In July 2020 Peshlakai was interviewed on the Tamron Hall Show about the impact of COVID-19 in the Navajo Nation, which she said was “Hit hard and the numbers were surpassing that of New York.” Hall asked Peshlakai about the challenges facing the Nation. Peshlakai touched on the lack of water and electricity and what that meant for people living in secluded areas on the reservation.

“I let them know that a niece of mine had passed away in a house fire — she and her husband,” Peshlakai explained, “Their home was heated by a woodstove and their lighting was provided by kerosene.” The couple saved their 3-year-old daughter by pushing her out the window of the burning home but neither was able to escape the inferno themselves.

Jill Steindler watched the television program from her home in Woody Creek, CO and brought it to the attention of her colleagues at Skyhook Solar.

Steindler phoned Peshlakai and told her about Skyhook’s solar stations and how she thought the renewable energy source could help replace the use of kerosene lamps and other gas powered appliances.

Skyhook Solar, a local company, has been on the rise for the past couple of years. It’s founder Daniel Delano is heeding the planet’s call to fight global warming one solar station at a time.

“Climate change is real,” said Delano. “No doubt about that at this point,” he continued, “And it may have severe effects in our lives within the next decade; not only a century from now — we know that, that’s a scientific fact.”

What is a solar station? Well, “It is a solar generator that is easily deployable to a street corner or to somewhere way off grid like the Navajo Nation,” said Delano.  People can charge their electric vehicles, bikes, and a plethora of other electronics. The company has set up several of its solar stations throughout the Valley — including at The Third Street Center in Carbondale.

The stations are built to withstand serious weather conditions and Delano expects the lifespans to last at least 20-30 years.

For some time he and his organization have envisioned bringing these stations to places where there is no electric grid.

Skyhook received funding through donations incurred by Aspen Global Change Institute for the Navajo Nation project. For one year, the duration of the pilot program, Skyhook will assume responsibility for the units and receive feedback from the users.

“In the case of the Navajo Nation the solar stations will recharge LED lanterns to replace kerosene lamps,” Delano explained. “Kerosene burned for light is not only unhealthy but has a significant carbon footprint,” he added, “It’s staggering that the use of kerosene in the world for lighting is equivalent to the kerosene burned for commercial aviation in the US every year.”

Steindler traveled to Cameron to meet with Peshlakai not long after they’d initially made contact. Peshlakai introduced Steindler to several families in remote areas, four of which agreed to have the solar stations placed near their homes. The little girl whose parents perished in the house fire lives in one of the households with her grandparents.

The two also met with the Tribal leadership in Cameron to get permission to go ahead with the project. After many talks, Steindler returned home and the Skyhook crew got to work.

In the early morning of Nov. 14 the company’s squad packed up their equipment and headed to Cameron.

The installation team, composed of locals and Skyhook members, assembled four of the company’s solar kit stations at each of the locations. This particular design includes several battery bricks which can be taken home to power electronics and later placed back at the station to recharge. “You can keep a charger pack in your purse while you’re herding sheep in the mountains,” Peshlakai quipped, “And not have to worry about your cell phone dying.”

One of the stations has a Wifi connection which makes distance learning feasible for students while staying close to home.

“The families feel very fortunate,” Peshlakai stated, and “At the same time they’ve received something that they need to watch over and protect as a resource.”

“We need to move past the kind of sugar coating of history,” said Peshlakai and at the same time, “We can’t live or set up our children and future generations to always look back on the negative. With global warming and these huge problems with climate change we really need to come together.”