A new Mr. Black teaches woodshop in a pandemic 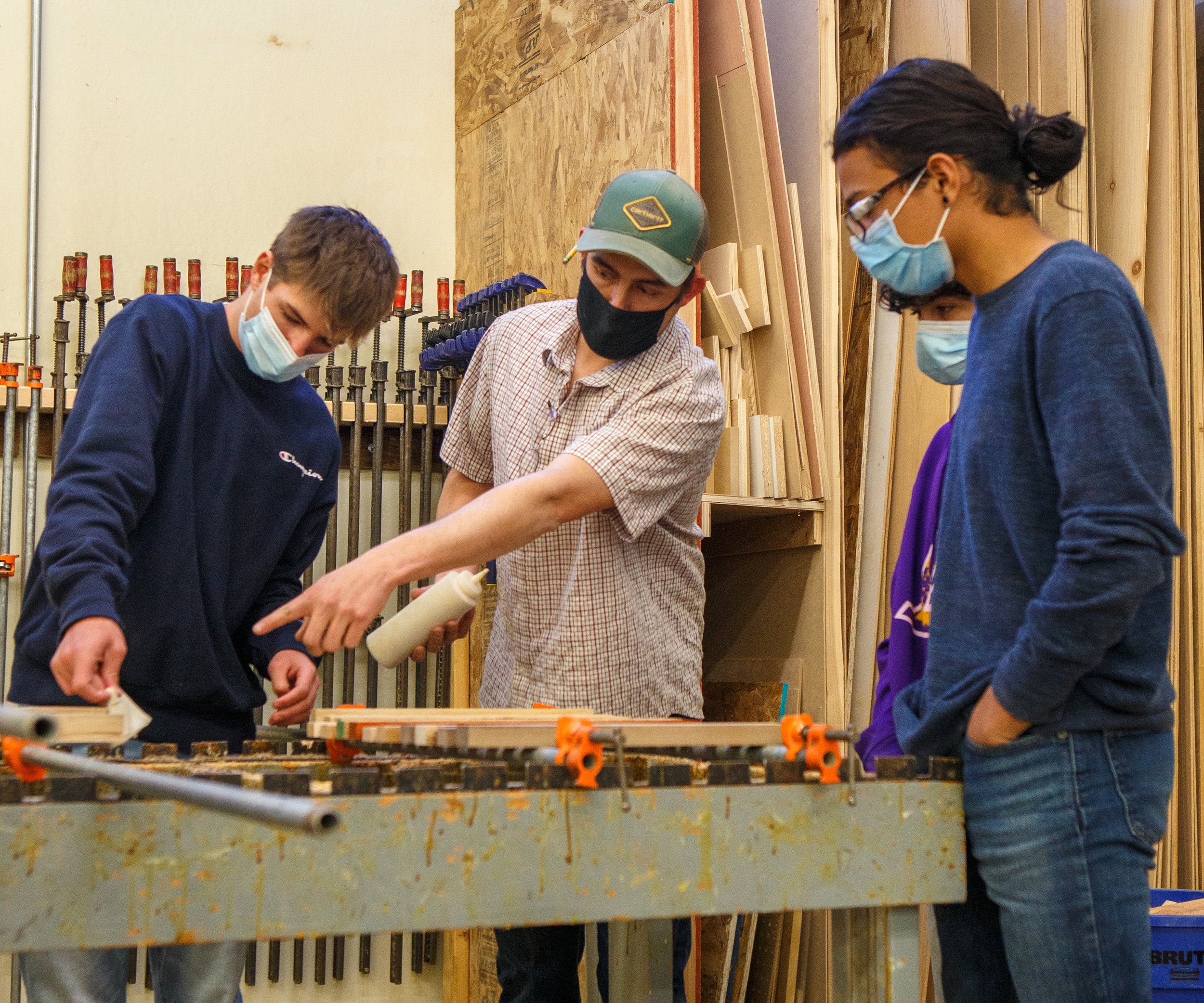 Michael Black (center) is finally getting to teach shop in person after months online. Photo by Sue Rollyson

You may not be able to tell under the mask, but there’s an almost-familiar face in the woodshop at Roaring Fork High School (RFHS). New to teaching himself, Michael Black grew up watching his father, Larry, fill the role for more than 30 years.

“It isn’t something I advertise out to all my students but the legacy of my dad here at this high school was really a positive one,” he observed. “You’d be hard pressed to find anyone who didn’t have a good Larry Black experience at one point or another.”

His brother, Ian, teaches shop at Eagle Valley High School — and his mom was a teacher as well.

“I get kind of a cool mix of seeing my brother in like his seventh year of being a shop teacher and how he’s kind of choosing to do things and then the input that I get from my dad is really rooted in how he did things throughout his whole career,” he noted.

Black didn’t actually plan to follow the family business. After graduating from RFHS in 2009, he studied studio art in Durango, then got interested in architecture while working construction. That led to a Master’s degree and ultimately a job with Raw Creative, a Denver-based design, build and fabricating firm.

“I got to work in all of those different shops and learn all sorts of new skills,” he recalled. “Then I worked as an architectural draftsman designer for a while and eventually ended up wanting more of the hands on work so I transitioned onto the job site. That was a lot of fun but the city life was starting to become kind of just more stress than I wanted to be dealing with.”

So late last year he moved back to Carbondale and, while working odd jobs, saw the opening atRoaring Fork. As one of the few new hires this year to apply before the pandemic, he didn’t realize he was signing up to teach online. For something as hands-on as woodshop, that took some doing.

“I recognized that it wasn’t realistic for me to distribute a bunch of tools into the hands of the kids, so the next best thing that I could think was to model the behavior that I was expecting in the classroom and and the skills that they would need to have to hit the ground running,” he explained.

Rather than try to do it all live on a laptop, Black pre-recorded videos walking students through the tools and how they applied to a small project. He’d pause for questions, just like in a regular in-person demonstration. And it seemed to work. When in-person learning resumed — albeit with some hiccups — the kids seemed to know their way around the woodshop.

Of course, social distancing is still essential. The small class size, large space and good airflow actually makes the class more manageable than most. Black has spacing marked out on the floor and everyone’s masked. The biggest challenge, he said, is the sheer number of surfaces and objects that have to be sanitized after someone has touched them. Still, it’s worth it.

“This pandemic has shed some light on just the fragility of the system as a whole, and I think it’s more important now, than more than ever, to have a class like this in schools,” he said. “It’s a skill you can rely on your whole life, both for yourself and to make a living. It’s also a welcome reprieve to a lot of the kids who have spent the better part of the last year, in front of a screen to be doing something with their hands.”

“It’s hard on everybody but it’s really hard on students to have such a change at such a shaping time in their life,” he added. “Making things the best that I possibly can for the kids is what keeps me going.”