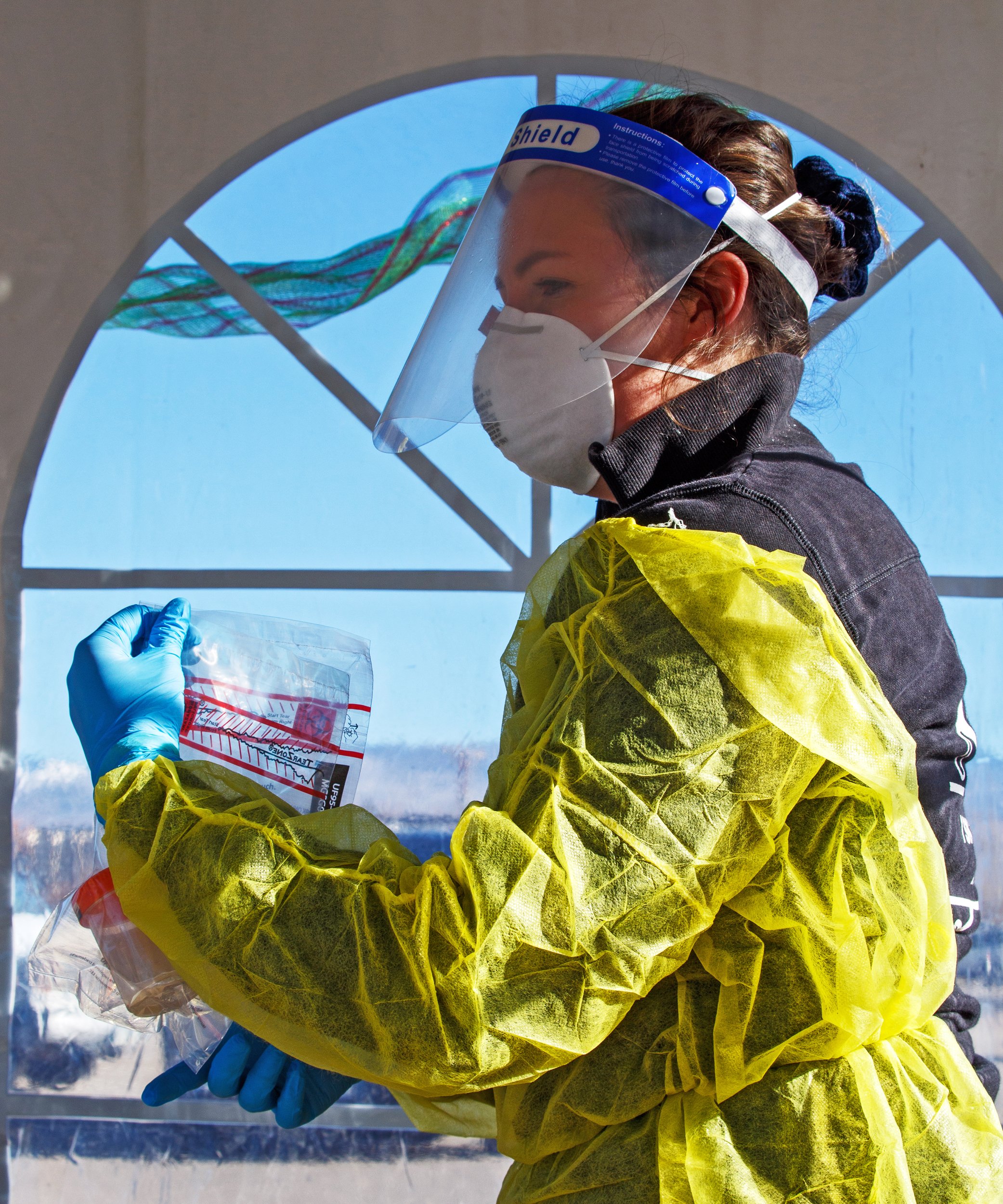 Free COVID-19 testing is now available behind Town Hall — as well as in Aspen, El Jebel and Glenwood Springs. Visit rfvcovidtest.com for info and reservations. Photo by Sue Rollyson

The spectre of COVID-19 hung heavy over the Garfield County Commissioners’ meeting after the Coroner’s Office determined that COVID-19 complications claimed the lives of at least five more residents. The loss of three people in their early 60s, a man in his mid-70s and two people in their 90s between the second week of November and the first week of December brings the county’s death toll to 11 with five more under investigation.

“In the 16 deaths that I’ve reviewed… I feel that at least 13 of those people would still be with us today had they not contracted COVID,” Coroner Rob Glassmire clarified as part of the Dec. 7 meeting.

The topic had already been discussed even before the agenda began in earnest, with Carbondalian Debbie Bruell seizing the public comment period to encourage commissioners to be more proactive in their messaging.

“Asking people to wear masks because it’s a rule… is definitely not as effective as helping people understand why wearing a mask is so important,” she noted. “It’s deadly for many people. Even when it’s not deadly, many people are having long-lasting effects… I don’t want to look like California. It’s scary what’s happening there.”

While Commissioner John Martin disputed Bruell’s assessment of the virus’s danger to the under-70 demographic, he agreed with the importance of slowing the spread.

“The goal is to keep everyone healthy as much as possible,” he said. “Those who take the risks should also take the responsibility of protecting other people.”

After Judie Blanchard, also of Carbondale, questioned the commissioners’ own lack of masks for the meeting — which was a mix of online and in person, with distancing in the latter case — the board asked for further COVID comments to be held until after the public health report.

That involved officials from hospitals, schools and local government, all of whom have been meeting weekly to coordinate.

“Another reason to really slow the spread is so we can continue operating our schools,” he noted. “The more people are sick in the community, the more staff we have sick.”

Grand River Hospital has a similar problem even as it increases capacity, according to Dr. Kevin Coleman.

“Our biggest issue is staffing,” he said. “As far as beds available, we’re sitting better than we were a week ago.”

“I think the message we hear from you is quite different from what we read in the newspaper,” he noted. 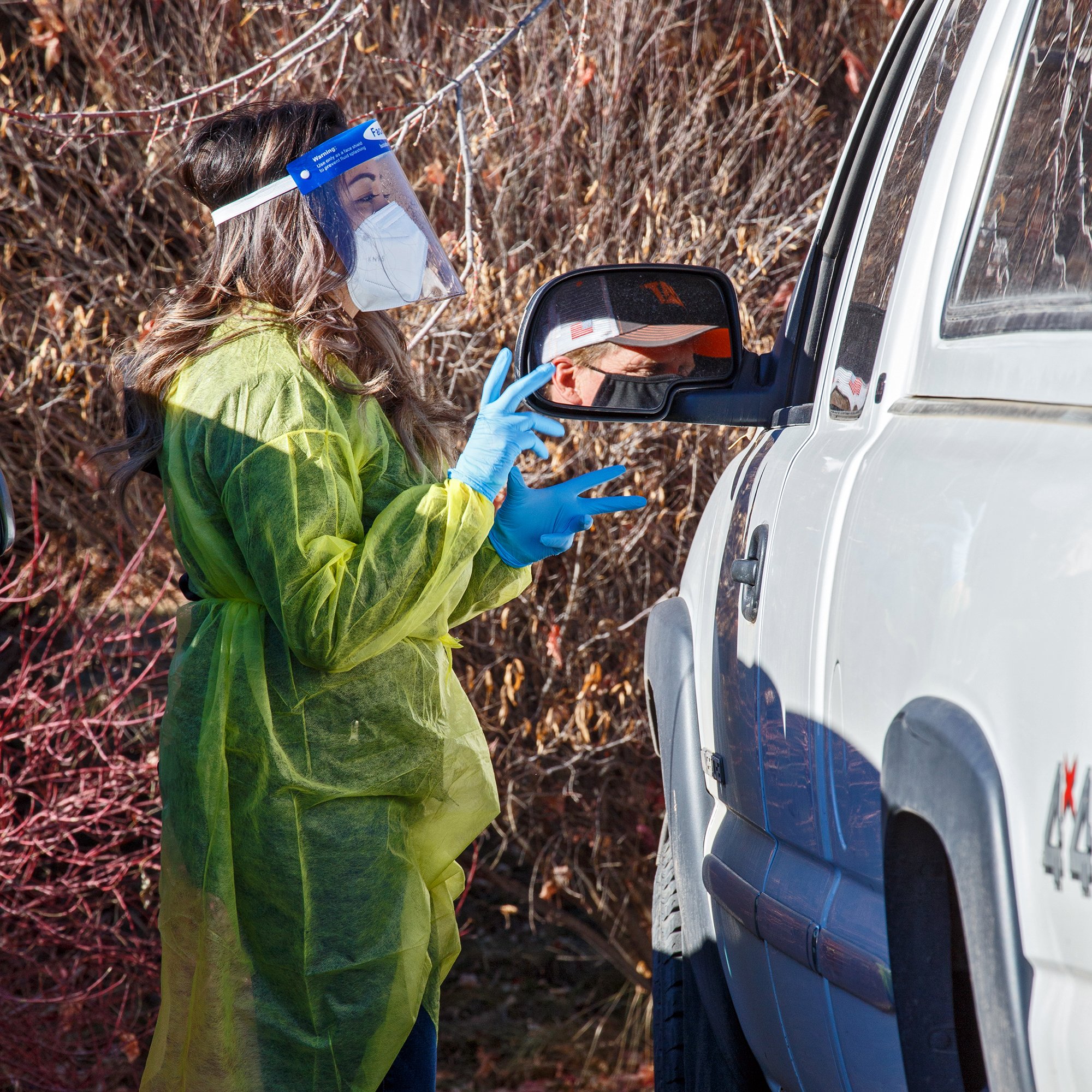 In an effort to delve a little deeper, The Sun caught up with Public Health Specialists Carrie Godes and Mason Hohstadt.

“We saw a really, really sharp increase beginning around Nov. 7, but we’ve started seeing a stabilizing of cases,” Hohstadt said. “That’s promising, but I don’t foresee that it’s going to go down significantly before the end of the year.”

He reminded the public that the main way to avoid contracting or spreading the virus is to minimize close contact with others. Both specialists acknowledged that that can be particularly difficult in the cold season, during the holidays and after so many months of caution.

“I think there’s some relaxing in those closer settings,” Godes observed. “Maybe early on, we were just much more strict.”

According to Hohstadt, a little over 50 percent of reported cases have confirmed person-to-person spread, but, he said, “we have widespread community transmission here.”

One emerging tool for identifying spread between strangers are exposure notifications — a setting on iPhones and an app for Android that uses Bluetooth to track contact and provide anonymous alerts when someone you’ve been close to tests positive.

“From the day it got turned on, we got calls,” Godes said. “It appears to be working well.”

Still, positive tests — much less hospitalizations or death — trend well behind exposure, with actions now having impacts weeks down the road.

“People have personal responsibility not only for themselves but for others,” Hohstadt asserted. “Somebody you love and care for could have a really severe outcome.”

“We really do need the public to know about isolation and quarantine,” Godes added. “If you’re waiting for a test result and you’re not feeling well, you really do need to stay home.”

“We are still above capacity, and we are retooling the way that we handle the influx of cases,” he said.

The triage process will prioritize at-risk populations and essential workers. Those are the same demographics that are likely to be first in line for vaccination — a bright spot on the horizon.

“The vaccines are supposed to be coming soon,” Hohstadt said. “It’s going to be interesting how we work with our partners on getting, keeping and receiving those.”

Restaurant patrons are now able to consume to-go alcoholic beverages in a designated warming area under the Grand Avenue Bridge.

The area is marked by fencing which will also provide some wind protection. Alcohol consumption hours are 11 a.m to 8 p.m. Monday through Thursday and 11 a.m. to 9 p.m. Friday through Sunday. The City has purchased six igloos to provide an area where people can take to-go beverages from the restaurants and to expand outdoor dining. The public is encouraged to use their own sanitizing wipes or hand sanitizer in addition to the regular cleaning throughout the day provided by City staff.  The City has also purchased branded blankets for restaurants to give away to patrons to encourage outdoor dining — contact matt.nunez@cogs.us or 384-6424 or matt.nunez@cogs.us.

Visitors to the upper Valley will be asked to take responsibility to minimize transition and keep the community open.

Beginning Dec. 14, all travelers staying at least one night in Pitkin County are required to:

Certain exemptions are available for those who commute at least weekly for work or school, those seeking or receiving medical treatment and military personnel. Failure to comply is a violation of the Pitkin County Public Health Order and may result in a $5,000 fine.

Changes to Eagle County Government operations implemented in response to COVID-19 will continue through the end of the year.

Restrictions on in-person interactions at county facilities began in mid-November, with services provided via phone and/or online. Due to the continued high-level of disease spread in the community, county officials have extended the time frame through December.

Community information and resources in response to COVID-19 are available at www.eaglecountycovid.org.