A stroll in Sopris Park 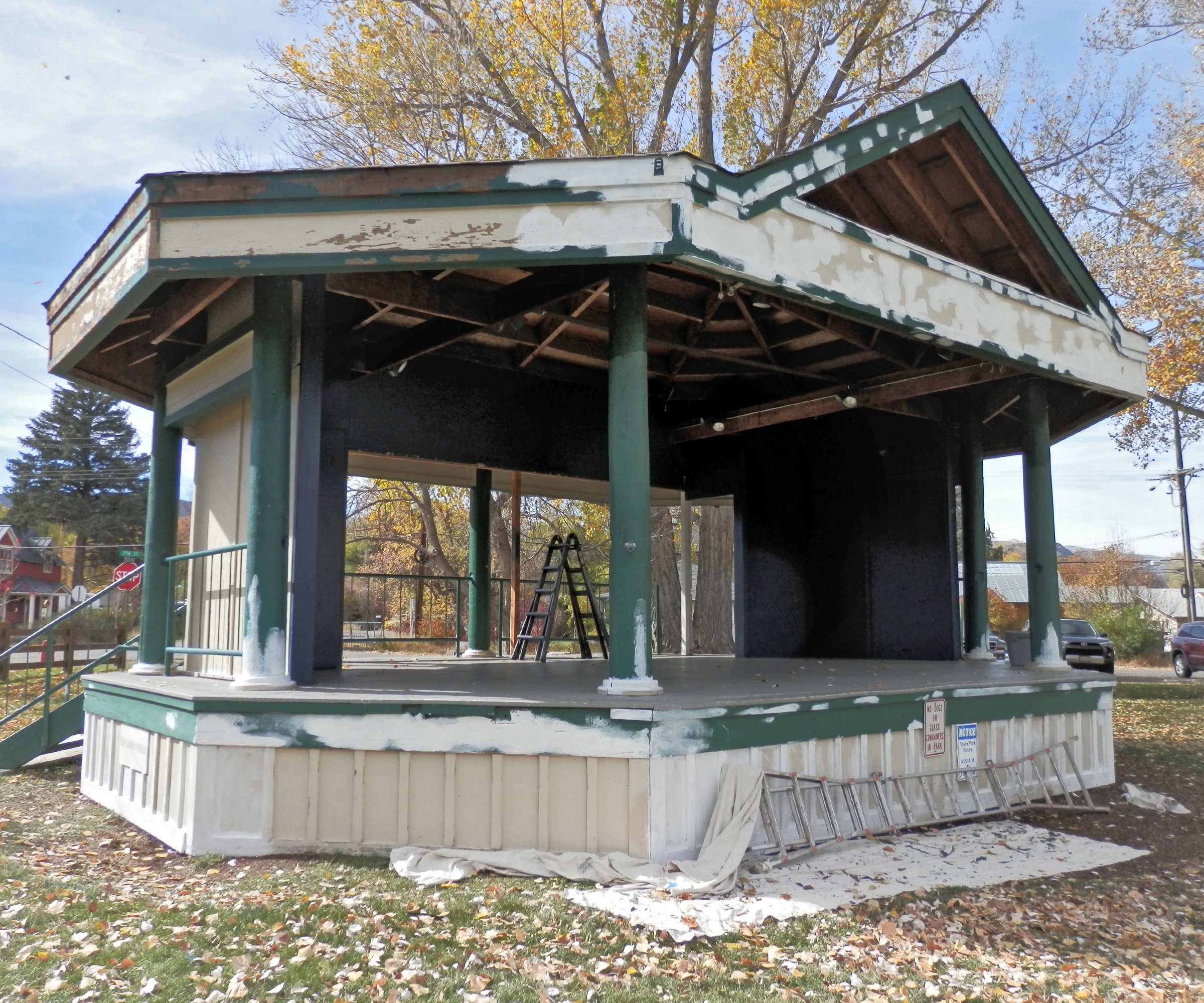 The gazebo is getting a bit of a makeover. Photo by Tom Mercer

Eric Brendlinger, Carbondale’s Director of Parks and Recreation, reports that Carbondale now has a total of 26 parks. Some are large and some are small, but Carbondale’s 3.9-acre Sopris Park is generally regarded as the crown jewel by virtue of both its location and the numerous community events that continue to take place there.

The park occupies most of the block bordered by Main Street, Euclid Avenue, Seventh Street, and Weant Boulevard. The remainder of the block is occupied by the White River National Forest’s Aspen-Sopris Ranger Station. The park, like the mountain, is named after Richard Sopris, a prospector, officer in the 1st Regiment of Colorado Volunteers, mayor of Denver and a representative for what is now Colorado in the Kansas Territorial legislature.

A casual stroll through Sopris Park reveals a lot about the community of Carbondale, offering both a historical perspective and an appreciation for the community’s residents and their values over a period of many years.

One such example of both qualities lies directly behind the John M. Fleet Pool. There you’ll find a very large rock bearing a plaque honoring 15 coal miners. The miners lost their lives due to an explosion at Mid-Continent’s Dutch Creek #1 Mine on April 15, 1981. In part, the plaque reads, “Our appreciation is unbounded. Our sadness is indescribable. Our memory is indelible. Our most fervent respect.” The explosion occurred when a combination of methane gas and coal dust in the mine was ignited, perhaps by a tiny spark. The resulting loss of lives had a devastating effect on the Carbondale community, and the tragedy will never be forgotten.

Adjacent to the miner’s memorial is another large, darker rock. The rock displays a huge crack, and it is covered with many holes that have been drilled into its surface. Long-time resident Laurie Loeb reports that the holes were the result of “drilling contests” conducted over a period of many years. The contestants – mainly miners – competed to see who could drill the deepest hole in a short period of time. The miners have left their mark on Carbondale in many ways.

There is a blue, metal park bench not far from the miner’s memorial plaque with a simple, heartfelt message that reads “In loving memory of Edward and Linda Diamond. I Do Not Know A Day I Did Not Love You.” Doctor Diamond was a Carbondale resident and was highly-esteemed by those who knew him. He died on Dec. 4, 2009 and Linda, his wife, died on Jan. 3, 2010. Together, they made a lasting impression on the community of Carbondale.

Another memorial in the park is located beneath a tree near Weant Boulevard. The memorial was created in the form of a bicycle, with colorful metal balloons floating above the attached plaque, which reads, “In Joyous Memory of Skyre Ryan Criswell, 1983 – 1990. For All Who May Learn That Just As The Flowering Of This Tree Is Part Of Its Cycle, So Death Is Just A Cog In The Wheel Of Life. May The Flowers That Fall So Gently From Our Lives, And The Ones Plucked And Carried By The Wind, Serve To Nourish Us. Skyre’s Horses Were Many. So May Ours Be.” Skyre suffered a fatal fall near Hanging Lake when he was 7 years old.

Potato Day, Carbondale’s longest running annual celebration, has also left its mark on Sopris Park. According to Suzanne Gray of the Carbondale Historical Society, the first Potato Day was celebrated in 1909 when Carbondale was known far and wide for the quality of potatoes grown in the area. The celebration has been staged at several different locations over the years, but shortly after the park’s  creation, it found a home in Sopris Park. Each Potato Day, barbeque beef and potatoes are roasted in underground pits on the south side of the park and served to hundreds of attendees. 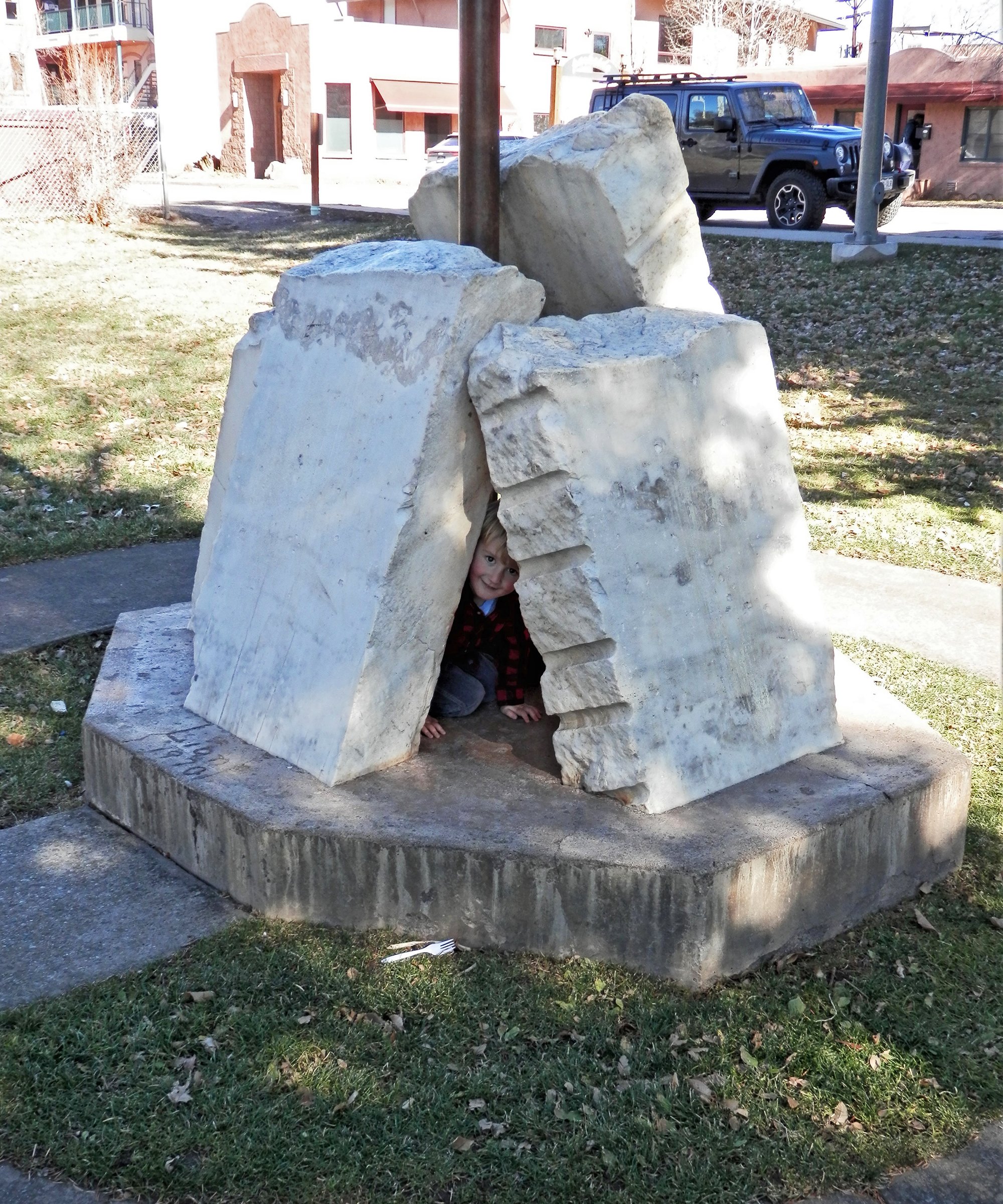 Sopris Park also offers a number of recreational features. The John M. Fleet Swimming Pool is located in the northwest corner of the park. Other park amenities include a shaded picnic shelter, a playground, a sand volleyball court and a stately flagpole flying the Stars and Stripes. “Lions 1970” is etched into the flagpole’s concrete base. Enormous slabs of marble from the quarry in Marble, Colorado surround the base of the flagpole. Last, but hardly least, is the entertainment centerpiece of Sopris Park – the gazebo. The Ben H. Reed Memorial Gazebo is located on the southwest corner of the block, and it has featured nearly every form of entertainment since it was built 36 years ago.

Carbondale resident Laurie Loeb moved to Carbondale in 1970, and notes that none of the town streets were even paved at that time. Laurie is the originator of Carbondale’s Mountain Fair, the Carbondale Council on the Arts and Humanities, and several other Carbondale organizations and events. Laurie recalls that, prior to the construction of the gazebo, a flatbed trailer was often used as a temporary stage for Mountain Fair. Later, temporary stages were built using donated slab wood materials that were originally milled at the Flogus Sawmill in Lenado (near Woody Creek).

The stage construction was executed by local volunteer contractors and builders, one of whom was Ben Reed. After each Mountain Fair, the temporary stages had to be disassembled and removed. Laurie notes that “the first Mountain Fair (which was called a ‘Chautauqua’) only had around 20 booths, mostly featuring crafts, food or games.” When the existing permanent stage was built in 1984, it was named the Ben H. Reed Memorial Gazebo following Ben’s untimely death in an auto accident. Ben Reed’s contributions to the community and early Mountain Fairs will be remembered for a very long time.

Each of Carbondale’s 26 parks, big or small, is an asset to the community. Sopris Park in particular, has borne witness to celebrations, ceremonies, concerts, picnics, laughter, and dancing, and will doubtless continue to do so for many years to come. Anyone up for a walk in the park?