Basalt honors its own 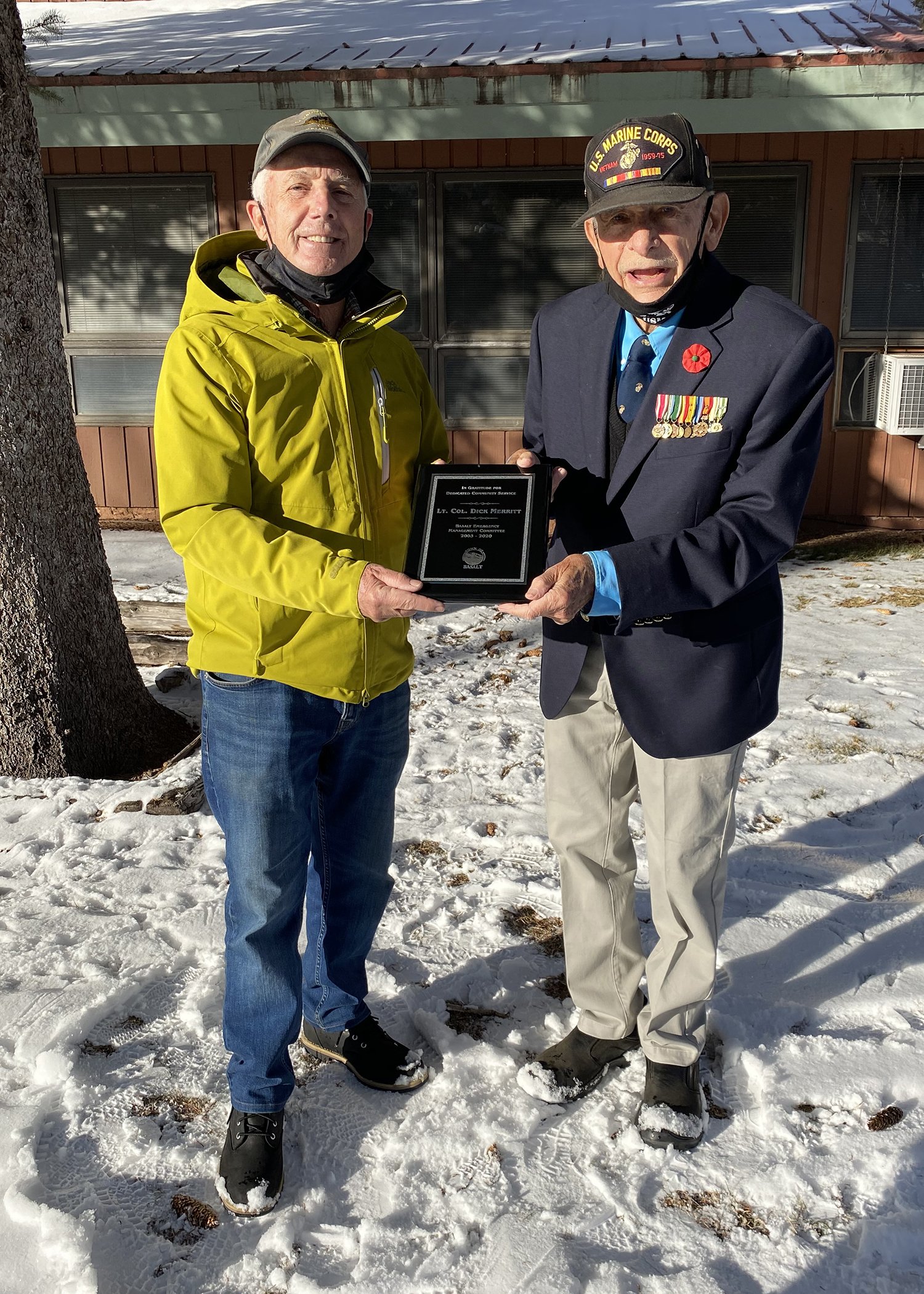 Some people move mountains, others like Lieutenant Colonel Richard Merritt, move people to the mountains for healing.
For this and other accomplishments, Merritt at a recent town council meeting received the Basalt Outstanding Community Service Award.
As noted by Basalt Mayor Bill Kane, “We acknowledge those who have been good volunteers and have committed to public service in our community.”
Among Merritt’s achievements is seeing to fruition in 1991 Basalt’s adoption of Colorado’s Home Rule Charter, which provides the power of a local city or county to set up its own system of self-government. The charter also requires the Town to adopt and maintain a master plan for the community and to consider the master plan in the context of all major new development applications.
Plus, Kane continued, “Merritt has been a real stalwart. And the former United States Marine Vietnam Veteran was very instrumental in setting up Basalt’s forest and floods group.“
Kane noted Merritt is so good at organizing and running communities thanks to his military experience.
When asked about his volunteer efforts, Merritt smiled and said, “I’ve been serving to help others all of my life.”
Merritt was the big push behind the successful effort to create the Emergency Management Committee in 2018 .
Kane said, “I think everybody recognizes he’s had a distinguished public service career in Basalt.”
Town Council in early December presented Merritt with the award certificate and recently installed the permanent plaque at Town Hall.
The certificate honors Merritt for “his profound influence on the quality of life in Basalt through his leadership of the Y2K committee” and for the “great effort in our community for selflessly volunteering and undertaking a leadership role in the many local projects with which he has been involved.”
He is a past member of the Basalt Rotary Club and currently serves on the Board of Directors of the Aspen Grove Cemetery and the Smiling Goat Ranch which helps autistic children and veterans recovering from combat trauma. In 2014, he received the Pitkin County Cares Volunteer Service Community Pride Award for his work interviewing local veterans for a permanent video record at the Library of Congress.
In 2014, he received the Pitkin County Cares Volunteer Service Community Pride Award for his work interviewing local veterans for a permanent video record at the Library of Congress.
The Colonel is a founding board member of Huts for Vets (HFV), which helps veterans gain tools for enhancing mental, physical, spiritual and emotional health. Most importantly, he ventures into the mountains with these combat veterans as they begin their journey of healing.
As Paul Andersen, executive director of HFV, explained “Our wilderness therapy programs are gender specific because that way the comfort level is increased, inviting a more open and easy conversation among peers. Because of going up into the mountains, we are not equipped to help those with physical disabilities.”
We work with vets who have ‘moral injuries’ concerned with what they did or did not do and includes those suffering with Post-traumatic stress disorder.”
Merritt is now working with Building Homes for Heroes to provide a home for a Marine Corps sergeant who sustained injuries serving in Afghanistan. He was honored by the Aspen Hall of Fame in 2017 and has retired from Aspen Skiing Company after 35 years of service to the Aspen ski industry.