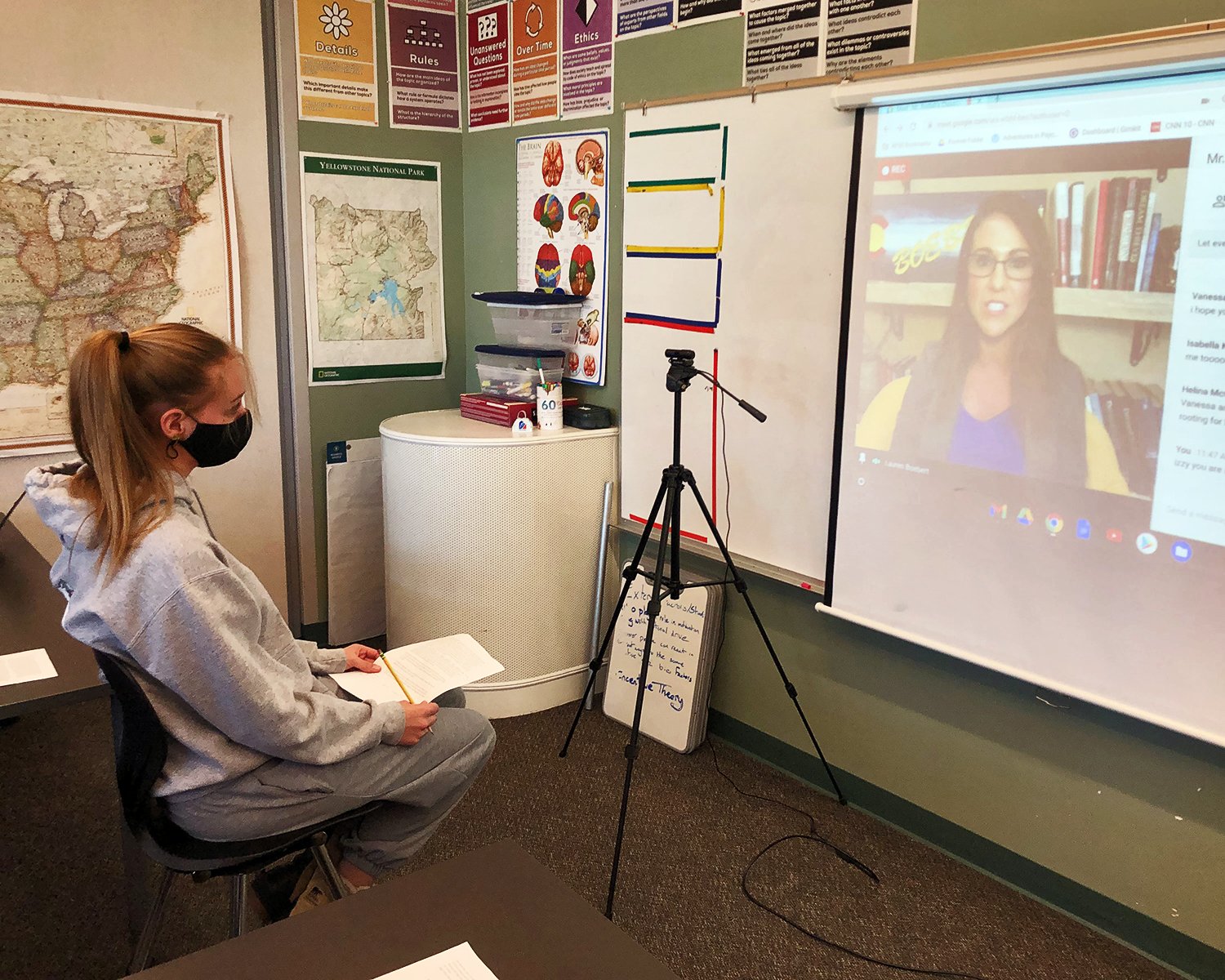 It is not everyday frustrated youth get a chance to squeeze their representative for answers, but some local high schoolers recently did just that.
On Dec. 8, the Advanced Placement (AP) Government class at Roaring Fork High School (RFHS) had the opportunity to interview Colorado’s 3rd Congressional District’s Representative-elect, Lauren Boebert. The students drafted questions, which teacher Cliff Redish — who issued the invitation — forwarded to Boebert’s team prior to the interview.
Some students attended masked in the classroom, while others did so virtually. Everyone’s cameras and microphones were muted except for the classroom’s where the young scholars could be seen quietly anticipating Boebert’s appearance on the projector screen. After some technical delays she successfully joined the room front and center.
Redish kicked it off and asked, “What is the role of government in America?”
The representative-elect stated that the reason the government exists in the US is to protect its citizens’ constitutional rights and explained that her purpose in getting involved stemmed from what she sees today as government overreach. “We the governed give consent to be governed and at times the government steps up and goes a little bit too far and that’s when we the people have a duty to step up and say we’re not consenting to some of those things anymore,” Boebert said.
The conversation developed into a quasi-debate after one of the high schoolers asked, “As a proud member of our Latino community I’d like to know how you’ll be supporting the Latino community and other minorities in our area?”
Boebert responded, “The answer is the same way I’ll support everyone: fighting for good paying jobs and to keep alive the American Dream,” and went into her campaign experience in Pueblo, where she acknowledged there is a significant Latino population. She said that people there were frustrated over oil and gas regulations which infringed on sales from the local steel mill. The elected official did not voluntarily offer any information regarding immigration or the treatment of undocumented persons in her district. The young interviewers pressed for a more salient response.
Another student followed up, “In regard to Vanessa’s question you say that you’re here to support everyone equally, yet on your contract here with Colorado you say, ‘we must enforce our current immigration laws, put a stop to sanctuary cities and build a wall.’”
“Right now we don’t have a secure border or a viable entry and exit system,” replied Boebert, “We also have a number of sanctuary cities which work hard to prevent federal officers from doing their job,” falling short of referring directly to the contentious Immigration and Custom Enforcement (ICE) agency. “I think it’s terribly unfair for the people who wait their turn and follow our immigration laws and I think that it leads to terrible outcomes for the people who come here illegally,” she summed up.
Boebert drew a comparison based on a conversation she said she had with Gov. Jared Polis. She stated that Polis had expressed frustration that Native Americans can move to Colorado from other states and because of a federal treaty (she did not specify which) are entitled to Colorado’s resources including healthcare and education. “Gov. Jared Polis was talking about the stress that that puts on Colorado’s resources and how that is not fair because this is a treaty with the federal government,” she surmised.
A spokesperson with the governor’s office informed The Sopris Sun that Polis and Boebert, “Discussed a bipartisan effort that other members of the delegation, including Representative Tipton and both Senators are working on requiring the Federal government to make good on its commitment to support tuition-free education for out-of-state Native American students at Fort Lewis,” college in Durango, CO; falling short of corroborating the congresswoman-elect’s statement.
When asked about the presidential election, Boebert praised Donald Trump and stated, “Right now this is a contested election and I believe that President Trump has every legal right and a duty to make sure that all of the legal ballots are counted. I spent time last week in the Oval Office encouraging him to continue using the legal rights that he has to pursue this all the way to the end.”
The students pressed the interviewee to explain her stance on a plethora of other contentious topics such as defunding Planned Parenthood, the popular vote and her campaign promise that she is done with compromise.
In a subsequent statement to The Sopris Sun Boebert said, “The students had great questions on policy, and I was happy to provide a perspective they are likely not hearing anywhere else.” She added that she’s, “Received some very kind messages from parents of some of the students who were grateful their kids heard policy discussions that are mostly absent from public discussions.”