“This I Remember” tapes return to Carbondale 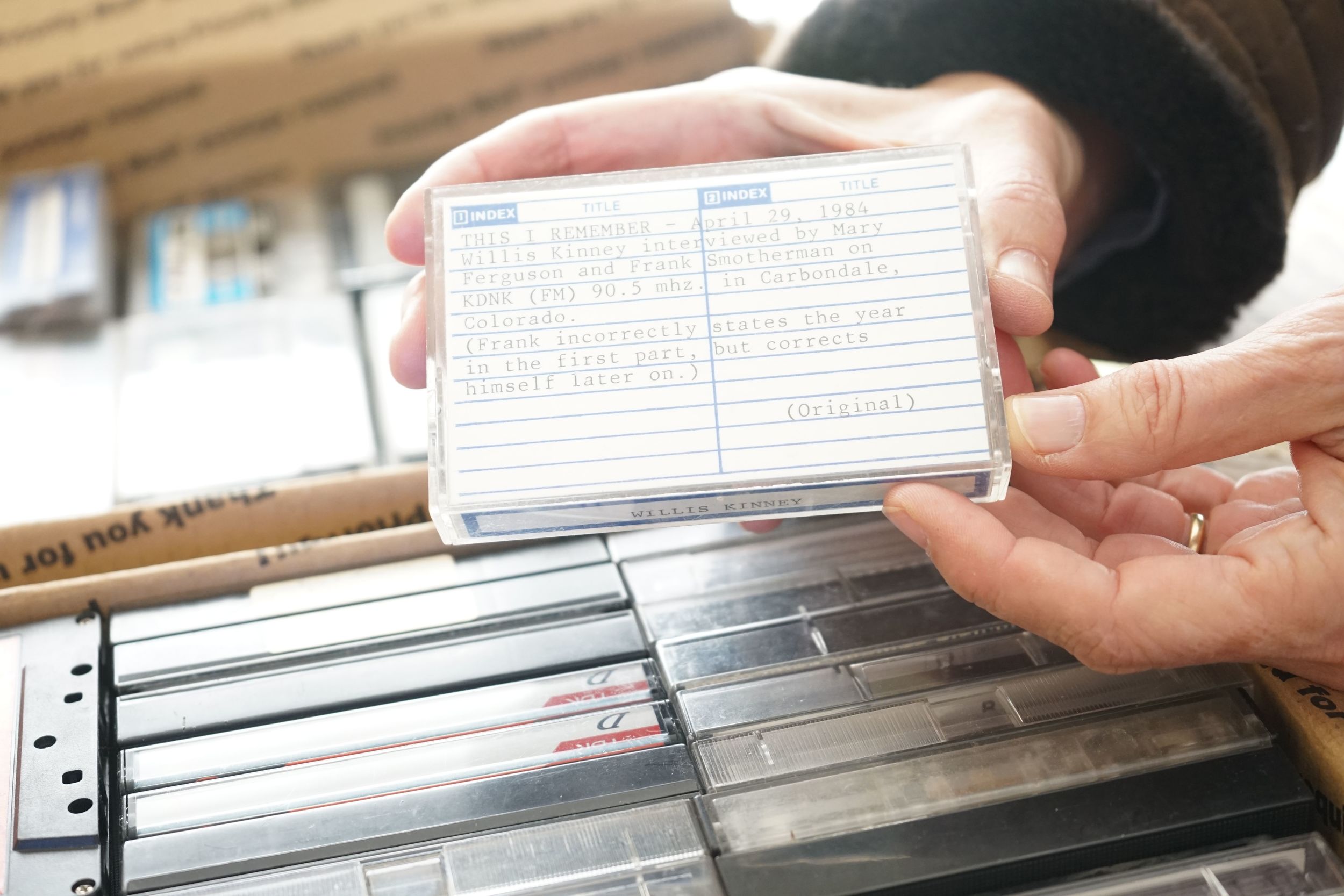 This cassette tape, which contains a historical interview conducted by Mary Ferguson and Frank Smotherman of Willis Kinney, is one of the estimated 230 tapes from the collection of oral histories recorded by Ferguson. Photo by Trina Ortega. 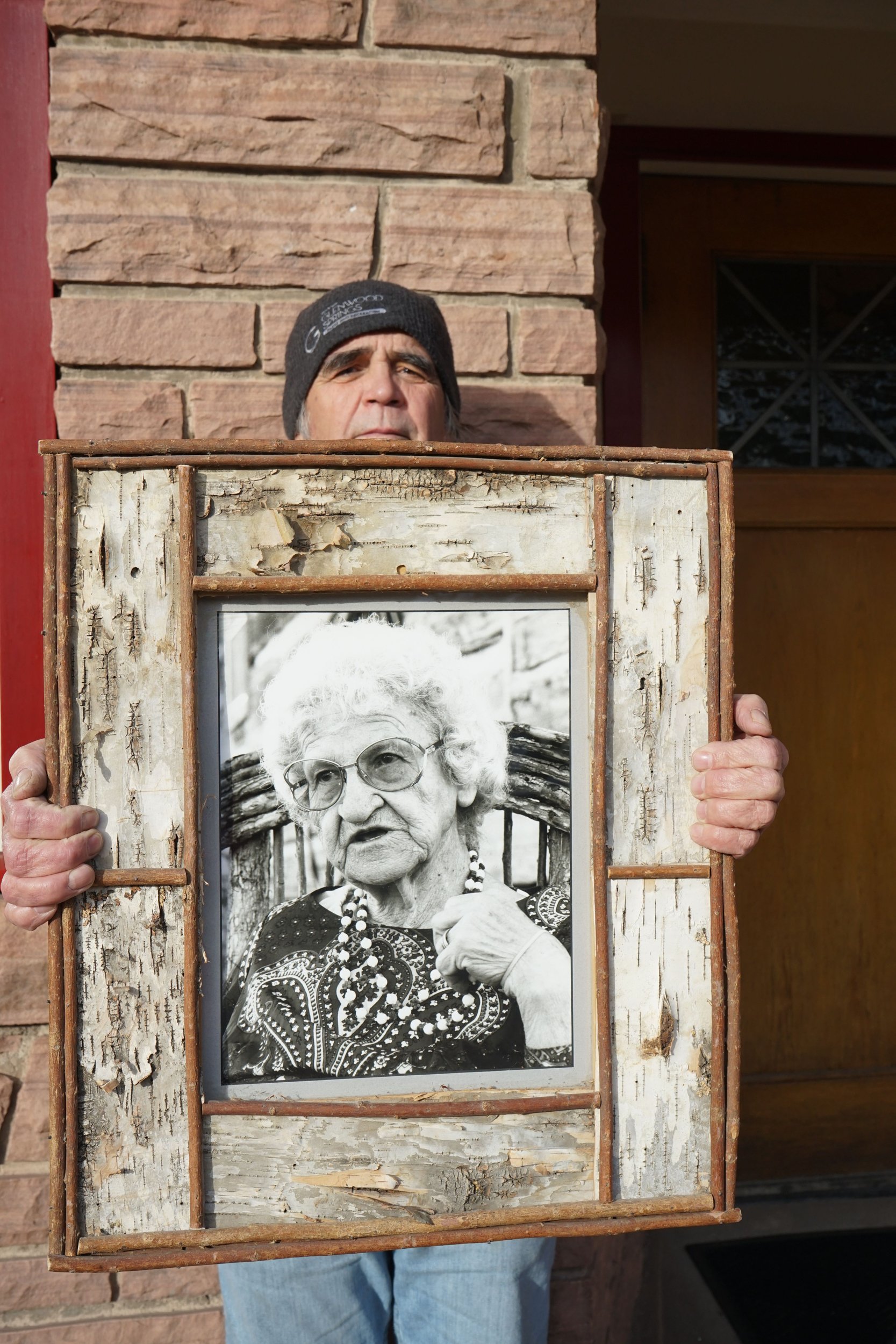 An elusive collection of cassette tapes containing historical interviews of Carbondale’s early residents and conducted by the late Mary Ferguson for her KDNK show “This I Remember” has landed in the care of the Carbondale Historical Society.

The tapes have been highly sought after for several years because they include oral histories from homesteaders and others who settled the area and established Carbondale in the 1880s. Ferguson herself was considered walking history, having been born in Spring Gulch in 1906 and lived from the horse-and-buggy era to the Space Age. A teacher, town council member, volunteer and historian, Ferguson died in 1997. For her KDNK show, she would interview guests, asking them to tell a bit about their past and the area’s history.

Sue Gray, vice president of the Carbondale Historical Society, said a number of community members had been trying to track down the tapes, which are the only known recordings. KDNK did not have an archive. “We’ve been trying to get these for about five years now, since [Mary’s son] died and the family sold the house,” Gray explained.

In January 2020, community members finally learned that the tapes were in the care of Ferguson’s grandson, Tom Ferguson, and his wife Cindy, who live in Collbran. They sent the two boxes, crammed with tapes, to the Historical Society in December 2020.

There are about 230 tapes and Gray surmises that each tape contains one interview. Some of them are labeled with a name and date in blue or black cursive writing. Others have type-written labels. Some of the gems read “Cowboy No Good” on one side and “W. Brown” on the other; “Fred Guise,” “Trip to Russia”; “June Blue,” “Sept. 1 1985 by Ruth Chacto about life in Marble.” Other interviews include Betty DeBeque, John Bolton, Judy Pugh, Bob Howard, Paul Lappala, Bill Hurd and Fred Guise.

During his 30 years in Carbondale, Gerry Johnston — now of Glenwood Springs — volunteered at KDNK. He played country-western and blues on his show The Vinyl Ranch and was Ferguson’s engineer for 10 years.

“She used to meet me there at the station when KDNK was on the second story of the Dinkel Building, and then I used to have to go pick her up,” Johnston said, describing KDNK’s small office and studio space.

Johnston brought a large framed photo of Ferguson to his interview with The Sopris Sun, and he stared at it thoughtfully while remembering her historical tours to Spring Gulch and the one-room schoolhouses where she taught. He said that because she was so involved in the community, people trusted her with their stories.

He recalled the story of Grace Cowen, who had confided in Ferguson that she wouldn’t be able to attend and graduate high school. According to Johnston, Ferguson offered to teach Cowen at her house.

The tapes and oral histories are as much about Ferguson as they are about the people featured, Johnston says. “There was nobody more … ” Johnston said, choking up, “of the area. She embodied the pioneer cultural history of this part of the valley for sure.”

The Historical Society will commission KDNK to digitize the recordings and make them available via the society’s website — eventually with a searchable database — and possibly a podcast. KDNK will also have access to the interviews. Gray said the Historical Society is seeking sponsors and donations to pay for the tapes to be transferred to a digital format.

Gray has been learning as much as possible about the area’s history since she began volunteering for the Historical Society in 2017. She has fielded questions to which she doesn’t have the answers and believes the Ferguson interviews might hold some answers.

“It also gives us a fuller understanding and appreciation for the community that we live in,” Gray said. “We build upon what they started and that’s been going on now for over 100 years. We’ve been building upon the foundations that other people laid, and understanding those foundations can help you see how to build upon them. Their history is our history. We’re tied to the past whether we like it or not.”

To donate to the “This I Remember” tape digitization project, visit carbondalehistory.org. Additionally, the Historical Society is accepting historical artifacts — as donations or on loan — from Colorado for its Dinkel Mercantile and renovated museum, which is expected to open by summer.