God said, “The fire, not a flood next time.” 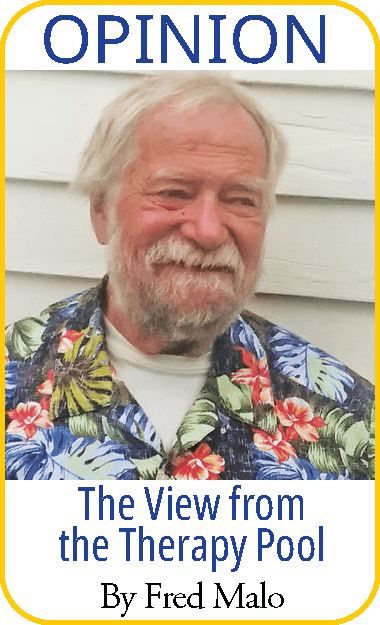 Opinion - The View from the Therapy Pool by Fred Malo

Did the smoke rising from last summer’s Grizzly Creek Fire scare the hell outta you? Was it frustrating to go outside because you thought you’d be safer from the coronavirus and be choked by the smoke and ash?
Does it make you heartsick to drive through our beautiful Glenwood Canyon and see how the fire has scarred it? Like me, did you move to the mountains to get away from the endless days of 90-degree heat only to find it here? Were you horrified reading the reports of the unprecedented and deadly wildfires on the West Coast?
These aren’t natural disasters. These are man-made calamities caused by our ravenous consumption of fossil fuels.
I know, lightening started the Pine Gulch Fire in a largely uninhabited area of Mesa and Garfield Counties and something in the I-70 median strip caused Grizzly Creek, but these infernos were as bad as they were because of blazing hot, bone dry, windy conditions caused by climate change. Never have we seen wildfires spread so quickly. Embers were flying miles over the canopy.
During last summer’s wildfire season, the worst in Colorado’s history, three major fires were taking turns being Colorado’s largest. The Cameron Peak Fire in Larimer and Boulder Counties won that dubious distinction at 209,000 acres, followed closely by the 192,000 acres in the East Troublesome Fire in Grand and Larimer Counties.
The East Troublesome stands out because, backed by 70 mph winds, it grew 100,000 acres in 24 hours, destroyed 366 homes, and cost two lives. At 139,000 acres in late July, the Pine Gulch Fire was the early leader in the race to be the state’s largest.
Despite all these larger fires in Colorado and the exploding holocausts on the West Coast, Grizzly Creek was named the nation’s top priority because it severed I-70, Colorado’s lifeline. Turned out, the interstate was closed for two weeks, the longest in its history, causing extreme hardships on the West Slope as goods and medicines from the Front Range were delayed. An angry spat between the Garfield County and Pitkin County commissioners resulted over the closing of Independence Pass.
Hot dry weather and high winds aren’t the only way climate change contributes to wildfires. Warm winters allow pine beetles to reproduce multiple times in a season rather than the normal once. While laying eggs, pine beetles deposit a fungus in the trees that kills them, some 1.87 million acres in Colorado since 2000. It’s estimated 41% of Colorado’s spruce/fir growth is infected with the fungus.
Besides eliminating the carbon dioxide absorbing capacity of the trees, the dead trees provide volatile fuel for forest fires. Wildfires are a self-perpetuating calamity. Not only are they caused by climate change, but they’re contributing to the problem. A Stanford University study has shown the carbon dioxide released by last year’s wildfires in the West more than made up for the reduced emissions from transportation and power plants during the pandemic.
The planet is warming ten times faster than it did when it was coming outta the last ice age. It’s been recently announced that 2020 was either the hottest year on record, the second hottest to 2016, or tied with 2016 depending on whether you believe the National Aeronautical and Space Administration, the National Oceanic Atmospheric Administration, or the European Union’s climate agency. Regardless, if 2020 was second, it was by a hair’s breadth.
Twice as many acres per year have burned over the past two decades compared with the previous 15 years. Dry conditions are exacerbated by the earlier melt of the snowpack. There’s no question these conditions are caused by the greenhouse effect from fossil fuel extraction and consumption.
What can we do to have an immediate impact? Not much. The seeds of today’s climate crisis were planted about 20 years ago and the greenhouse gases we’re emitting today will impact the climate our children and grandchildren will face. We could ban all fossil fuels today and this year’s fire season would be just as bad.
About the only instantaneous effect we can have is to follow the advice that our former forest ranger in chief, Donald Trump, gave to California – get out the rakes and clean up the forest floor. Rakes, of course, won’t do it, but with some chainsaws and backhoes we could remove a lotta dead trees and undergrowth.
Forest management is a positive step, but it’s really pissing in the ocean. If the forest canopy is tinder dry from heat, drought, and wind, it’ll still explode with the slightest spark. The Pine Gulch Fire and most of the fires on the West Coast weren’t forest fires. They occurred in open spaces. Plowing all that under would be impractical.
Some old advice is still good advice. Smokey the Bear said to build your campfires only in contained fire pits. If you must smoke, use an ashtray. Don’t let chains dangle from behind your rig. During high fire danger periods, don’t play with your guns, tracer rounds or otherwise.
I’m afraid we’re gonna continue to have bad fire seasons in the near future, but if you’d like the next generation to not hafta experience these conflagrations, join the fight against climate change. That’s a noble and unselfish goal, isn’t it?
I happen to believe the place to attack climate change is the demand. Get the internal combustion engines off the road and shut down the coal and natural gas power plants and the supply will wither away on its own. We can all play a role in those efforts without the help of government.