Pages of the Past -“Movieland” comes to El Jebel 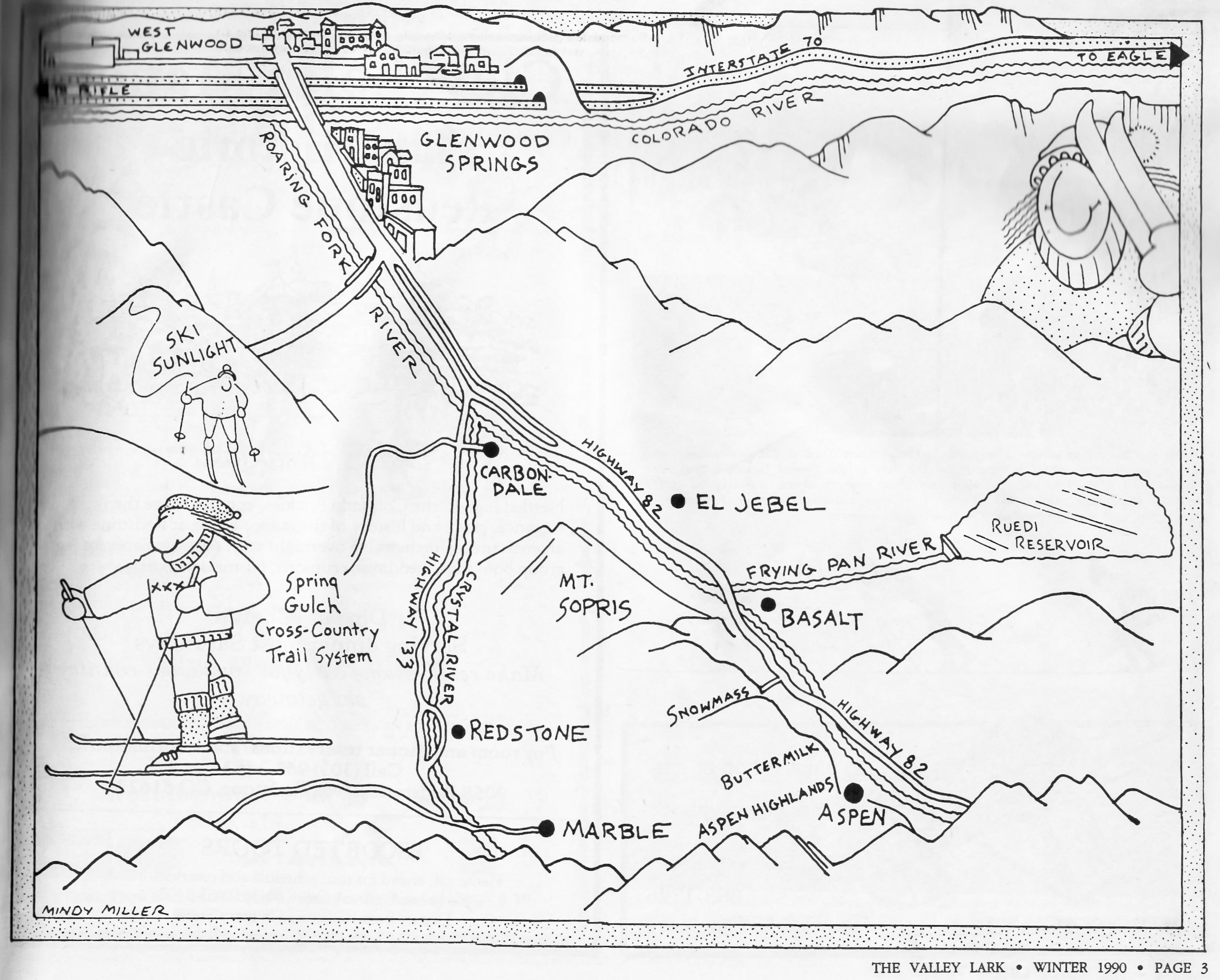 "The Valley Lark," a special winter edition of The Valley Journal, published this map by Mindy Miller in 1990/1991.

From the archives of The Valley Journal and The Sopris Sun

Jan. 8, 1981
Fred Pulver wrote about the Banzai Flu after contracting it. “One minute you’re fine, the next flat on your back with the worst splitting headache, chest congestion, cough (the hacky, dry kind) and that sweet all-over achy, hot and chilled feeling.” With the virus then reaching epidemic proportions, Dr. Gary Knaus helped him out, advising rest above all else.

In other news … locals sighed in relief as the first snow in more than a month graced Carbondale in what was “shaping up to be a disturbingly dry winter.”

Jan. 10, 1991
The Eagle County Planning Department approved construction of a multi-screen movie theatre in El Jebel, along with a two-story, 12,000 square foot commercial building. Planning staff generally liked the idea because “the commercial center does not orient itself toward Highway 82 and it turns its concentration onto itself.’” Developer Charles Moss is quoted saying that the midvalley “is no longer just a transportation corridor but now its own community.”
In other news … cloud seeding by Aspen Skiing Company was thought responsible for an abundance of snowfall in Carbondale after eight silver iodide-exuding machines were newly installed between Aspen and McClure Pass. Meanwhile, the Methodist Church in Carbondale hosted a peace vigil to protest war in the Middle East.

Jan. 4, 2001
A mid-afternoon vehicle break-in at the Spring Gulch parking area resulted in a mini-chase into town with both the victim and an alleged juvenile suspect left facing charges. The chase ended at the police department parking lot where a frozen bottle of water was lobbed into the suspect vehicle’s windshield by the robbery’s victim.

In other news … developers of the controversial Crystal River Marketplace shopping center faced solid opposition with Mountain Folks for Global Justice, a local citizens’ activist group, hosting a community design charrette offering alternative ideas for the property. Approximately 180 people attended a board of trustees meeting on Jan. 23, 2001 to discuss the topic with then-former trustee Brad Hendricks in favor of the project, stating “The only reason that whole side of the highway still looks like a cattle ranch is because of CRMS […] If we want to continue to function as a town, we need to develop this property.”

Jan. 6, 2011
Satank’s 110-year-old bridge was lifted back into place after months of being rebuilt in a local shop. The project cost $800,000 and was proposed years before with advocacy from then-trustee John Hoffman. The bridge is on the National Register of Historic Places and was used in a scene for the 1990s film “Flashback” starring Dennis Hopper and Kiefer Sutherland.

In other news … three parcels in the downtown core, surrounding the Thunder River Theatre, were turned over to a bank as GoldenTree InSite Partners pulled out of town. Meanwhile, Wake Up Now gathered citizens in front of Town Hall to honor victims of the Iraq and Afghanistan wars.