Plotz for Plosky’s and kvell for Kula 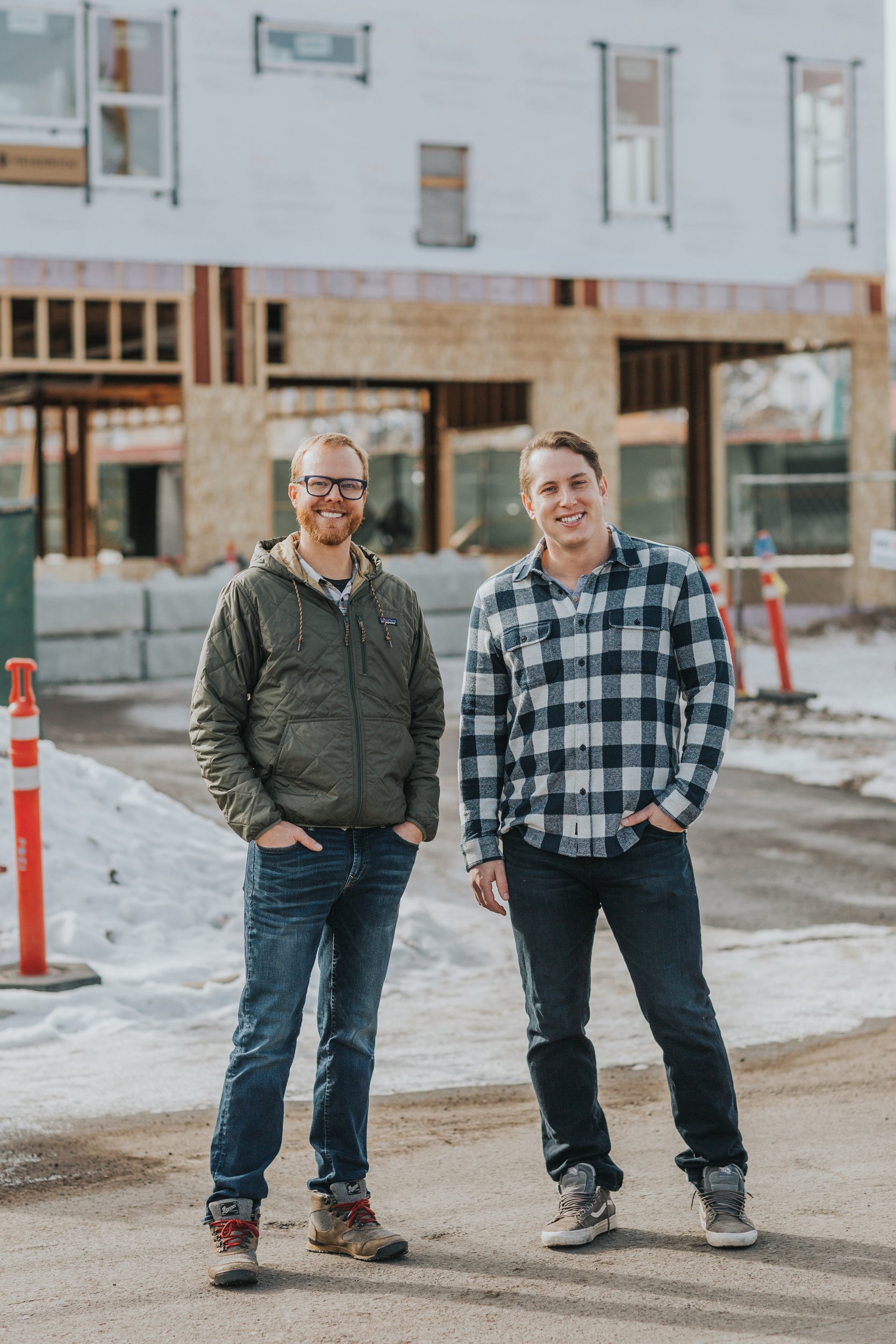 Mark Hardin (left) and David Eisenson (right) stand on Colorado Avenue in front of the partially-constructed building that will house their deli, Plosky’s, which will feature bagels and lox, reubens, pastrami on rye and other classic New York sandwich fare. Photo by Olivia Emmer.

Bagel-lovers rejoice, a new Jewish-style deli is on its way. Slated to open in June 2021 is Plosky’s, the new venture of long-time local chefs David Eisenson and Mark Hardin. The pair met working at Six89, the much-loved restaurant by Mark Fischer that closed in 2012. They’ve both worked at various eateries throughout the valley including Phat Thai, The Pullman, Aspen Skiing Company restaurants and Town, where Eisenson was head chef when they unexpectedly closed in 2017 due to lease negotiations. Mark Hardin currently runs Field to Fork, a catering company he founded in 2015.
When Town closed its doors, Hardin recruited Eisenson to cook with him at the catering company, where they have collaborated for several years. As that business grew, they began to search out a larger kitchen.
Eisenson, originally from New England, had been in the Valley since 2011, and the lack of Jewish-style delis left him feeling like there was a big sandwich-shaped hole in Carbondale’s foodscape.
In addition to the growing needs of the catering company and his deli dreams, Eisenson and his wife Cari had long dreamed of deeper collaborations between their two businesses. Cari Eisenson is the owner of Kula, a yoga studio that was on Main Street in the Dinkel building for nearly 10 years. David would cater special events for the studio and the couple ran several yoga retreats in Mexico, where Cari taught yoga and David cooked.
After a year or two of viewing properties between Glenwood and Basalt, realizing they all wanted to be in the Carbondale core, and despairing to find the right space for their unique collaborative vision, they learned about the development on 1201 Main St.
1201 Main St. was most recently an unpaved parking lot on the northeast side of the roundabout next to Crystal River Spas. The 0.785 acre parcel is now being developed by Loge Properties, guided by business partners Jack Schrager and Riley Soderquist. Currently under construction and aiming for occupancy this June, the building features 18 studio apartments, of which five are affordable housing, and nine two-bedroom apartments. The developers hope to fill a need for single people, couples and empty nesters, many of whom currently struggle to find affordable places to rent on their own. In an interview, Jack Schrager said, “There have been a couple of housing studies done for the entire Roaring Fork Valley in the last couple of years and most of them have concluded that the valley is several thousand housing units short.”
David reflected, “I did a full tour of the valley from Glenwood to Basalt and there were not great, comparable opportunities. That will change when people like Riley and Jack take on these older strip mall developments from the ‘80s, but a lot of what I saw was really old, or really, really expensive.”
The approximately 3,000 square feet of commercial space will be split between the deli on the Colorado Avenue side, the yoga studio on the Main Street side and a shared lounge space on the corner facing the roundabout. The lounge space will serve as a place for deli patrons to nosh and for yogis to schmooze before or after classes. Kula’s space will boast a larger studio that can accomodate classes of up to 43 people, more natural light and expanded locker and bathroom areas.
“When the place opened off of 133, it was definitely a bittersweet decision to make because we’ve been planted on Main Street the entire time that Kula has been around,” commented the studio’s owner Cari. “Plain and simple, there’s just growth taking place in Carbondale and we had outgrown our space on Main Street strictly for its size. The classes at Kula had started to get to be too big and we had to turn people away at the door.”
The deli, named Plosky’s after a business David’s Jewish great-grandfather once operated in the Bronx, features a large kitchen where Mark and David can cook for both Field to Fork and the deli. The front of the space features a prep area where David will assemble sandwiches for breakfast and lunch service. The deli will operate counter-style, with butcher and grab’n’go cases featuring local meats, private label packaged foods and prepared foods. There are no plans for table service, but there will be a few seats in the deli for folks who just can’t wait to stuff their “punims” with juicy reubens and crunchy pickles. As Mark Hardin explained, “We want to make something that’s going to be sustainable. We think that if we focus on the food and giving people a good product, and eliminate the need to have table service, we’re going to be able to focus on our product and give people a better product for the price.” David doubled-down, “This is a 10-year lease with an option to extend, so we’re in it for the long haul. We’re Carbondale people.”
Finally, don’t be misled by this author’s playful use of Yiddish. The deli will not be kosher and will, in fact, serve house bacon.