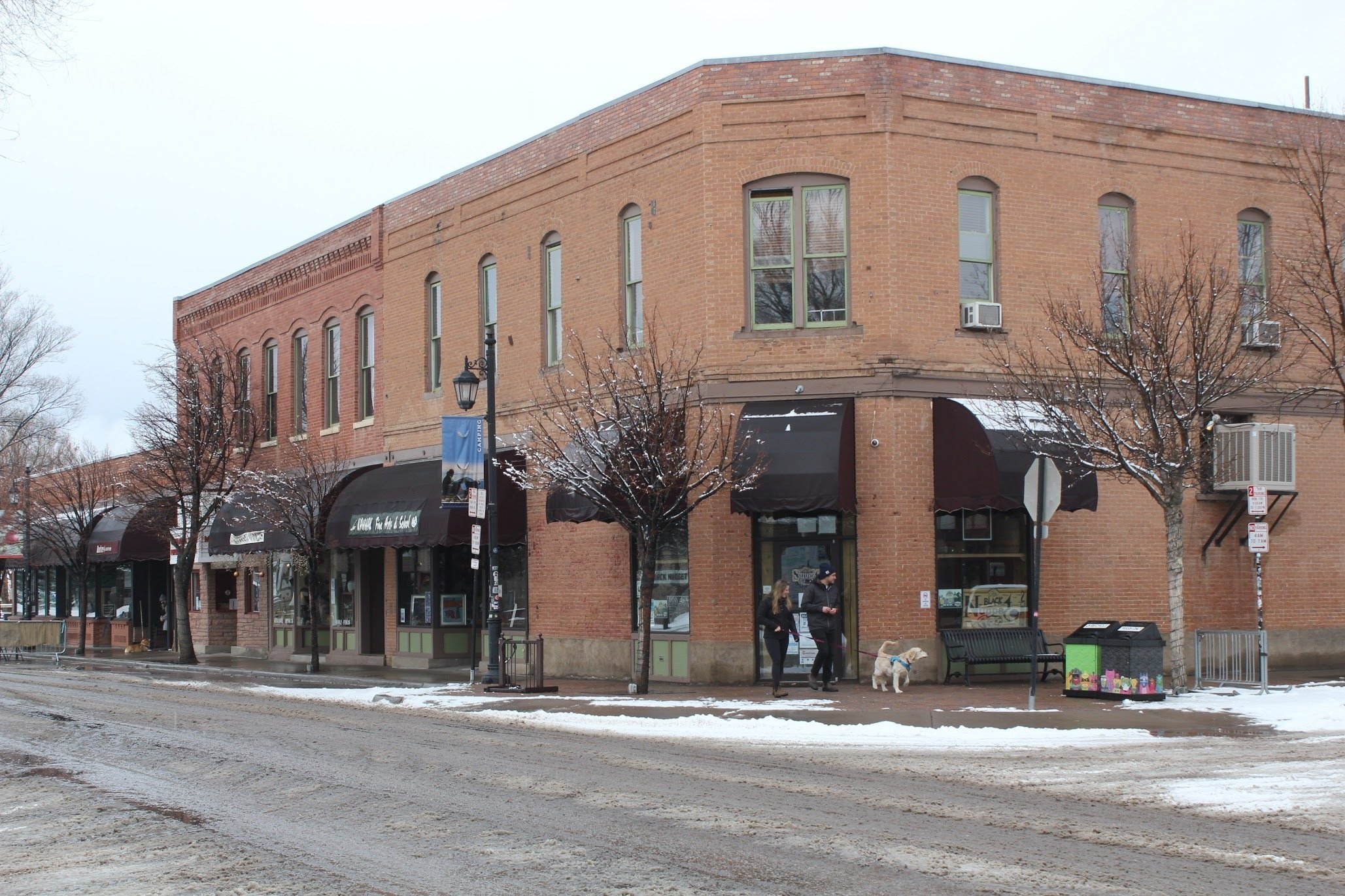 A dog jaunts in front of the Dinkel building over 100 years later. Photo by James Steindler.

There is no doubt about it, Carbondale is bracing for change and many wonder at what cost. One particularly concerned group is the Carbondale Historical Preservation Commission (CHPC) which fears bits of the town’s history will continue to be chipped away. One significant motivator for such worry is the recent sale of the Dinkel Building in Carbondale’s Historical Commercial Core (HCC).
If a building in the HCC (which spans from the east end of Main Street to 6th Street and north toward Town Hall) is older than 50 years, any renovations or demolition requires a permit. Before obtaining said permit, the CHPC will undergo a review of the building for its historical significance. A prospective developer is then encouraged, but not required, to consider the review.
The CHPC has the power to stall a permit from being issued for up to 180 days to try and achieve a concession but, in the end, the proprietor has the final say.
Essentially the town’s Unified Development Code (UDC) — as well as the Municipal Code — do not stand in the way of developers eventually altering or tearing down buildings which CHPC considers to have historical importance. That is, unless it is landmarked … we’ll get to that detail in a moment. 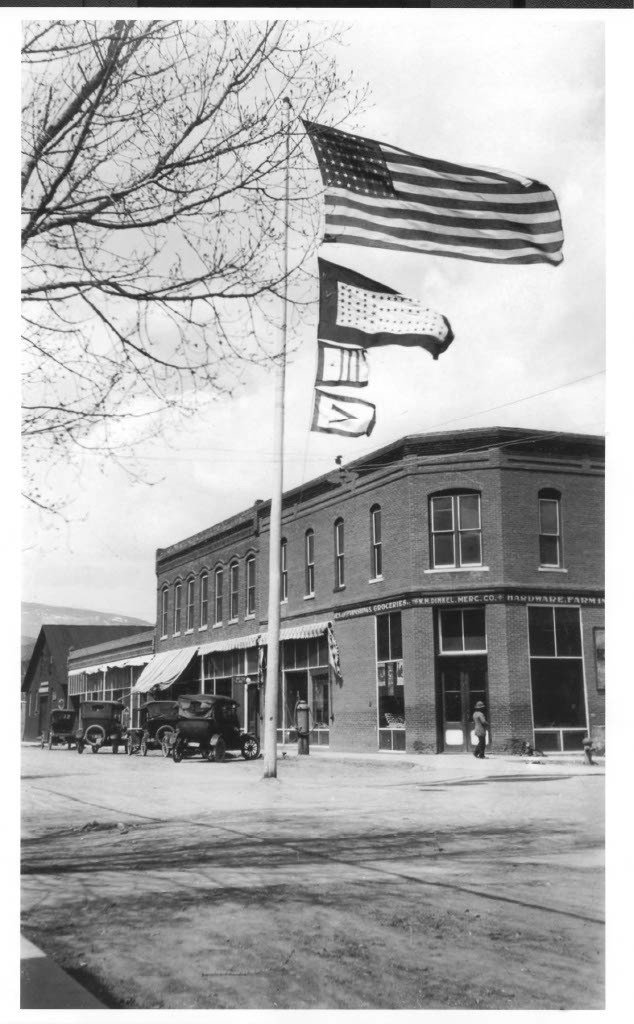 A dog sits in front of W.M. Dinkel Mercantile (The Black Nugget today) sometime around the end of WWI. The second flag from the top has a star for every local that served in the war. The lower flags are Liberty Loan Flags, awarded when a business or municipality surpassed its quota for selling bonds to finance the war. Image courtesy of Carbondale Historical Society and refined by Frank Norwood of Main St. Gallery and Framer.

A fight to preserve
CHPC board member John Williams put it this way, “We want to toughen up the code and give the town more say and teeth in the game.” So the CHPC has set out to change the code.
First, they would like to expand HCC protections to the Old Town Residential (OTR) area as well as for “structures of [historical] merit” throughout town. OTR comprises many older homes south of Main Street between 2nd Street and 8th Street. Secondly, the commission would like to require that a town staff member review any minor alteration proposals with a caveat that they may call on CHPC for further analysis.
The commission is refining the proposed word changes which they’ll discuss with the Board of Town Trustees (BoTT) at a work session in the coming weeks. Town Planner John Leybourne added that, “A great amount of public input will be needed before a final version is approved.” Eventually, the proposed changes will go to the Planning and Zoning Department for a final review before circling back to the BoTT for approval.
While members of the commission would like to see the decision of their review have more clout, Leybourne stated that even with the proposed changes, “CHPC would not be able to stop a project if the owner does not agree [to do so].”
Therefore, CHPC is on a mission to get the word out to Carbondale property owners that there is an option to landmark their historic buildings. A subcommittee is currently working on a brochure with simplified information regarding the pros and cons of landmarking. Williams describes the brochure as the CliffNnotes to cumbersome legal jargon in the code. Other municipalities, including Glenwood Springs, already have similar brochures.
Once a building is landmarked, it is protected (to a degree) from being demolished by future developers. However, there would still be a means to alter or demolish a landmarked building, albeit through several proceedings and many more strands of red tape. Most importantly, a developer would have to obtain a landmark alteration certificate granted by way of the CHPC for any proposed alterations or demolition. A developer could then appeal for an exemption if their request is denied by the CHPC.
According to Leybourne, at this time there are no landmarked buildings in Carbondale. Perhaps Dinkel will be the first.

Dinkel building
If you came across a previous article about the Dinkel building in The Sopris Sun, you know that it was built by a prominent townsman — Wiliam Dinkel — in the late 19th century. In fact, the edifice is roughly the same age as the town itself.
You may not know that the previous owner, Anthony Mazza owned the building for the last 30 years. Mazza purchased it from Dinkel’s grandson, Wallace de Beque.
To the naked eye, the old structure remained mostly unchanged under Mazza with the exception of a cornice atop the building being removed after a brick fell from it to the street below. This raised some safety concerns prompting it’s removal. Nevertheless, even that seemingly small alteration stirred up a lot of resistance.
Today, because the Dinkel building is in the HCC, any request for a demolition or alteration permit would prompt a courtesy review by the CHPC. Fortunately, the recent buyer does not intend to make any big modifications — at least, not anytime soon.

Lucked out this time
Those worried that Carbondale is becoming increasingly more difficult to recognize may be happy to know that the new owner of the Dinkel building has a fondness for historical preservation and even expressed a willingness to confer with the CHPC in the future.
Rick Holmstrom is the founder and managing partner of Menlo Equities — a prominent property investment firm based out of California. The company invests in buildings across the nation. In fact, their first investment back in 1994 was in Silicon Valley and served as Apple’s original corporate headquarters — Apple still uses the building today.
An important distinction is that Holmstrom invested in the Dinkel building outside of the company — a personal purchase, as he put it.
He said, “The intent here is not to do some crazy repurposing of the building or modern kind of out-of-character work on it,” but added, “At the same time I think the effort is going to be to provide the TLC that the building needs.”
Each of the business owners reached by The Sopris Sun expressed their hopes to stay and most indicated a mutual feeling that the new owner may be a good fit. He and his family have enjoyed live music at Steve’s Guitars, films at the Crystal Theatre and Holmstrom expressed sheer delight in Bonfire Coffee as somewhat of a connoisseur.
Holmstrom lives in California but bought land near Prince Creek Road about 25 years ago where he and his wife built their second home roughly 15 years later. Furthermore, one of his children is a recent graduate of Colorado Rocky Mountain School. In short, while he’s not planning on redeveloping the Dinkel building, the family has developed their own niche in town.