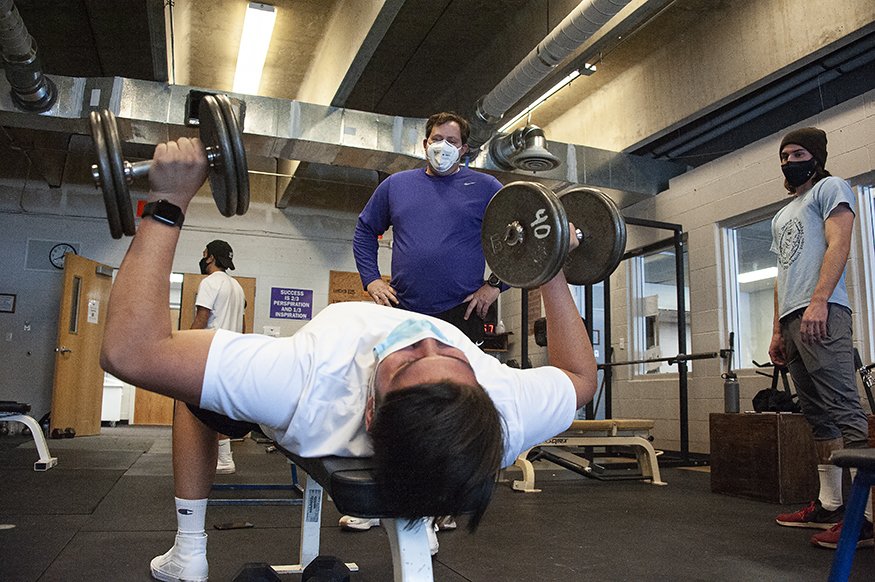 Senior Ubaldo Bogarin, who plays for the Longhorns on both the varsity offensive and defensive lines, works out at the Basalt High School gym as football coach Carl Frerichs looks on with junior Jack Hamm, a tight end and a linebacker. Photo by Roberta McGowan. 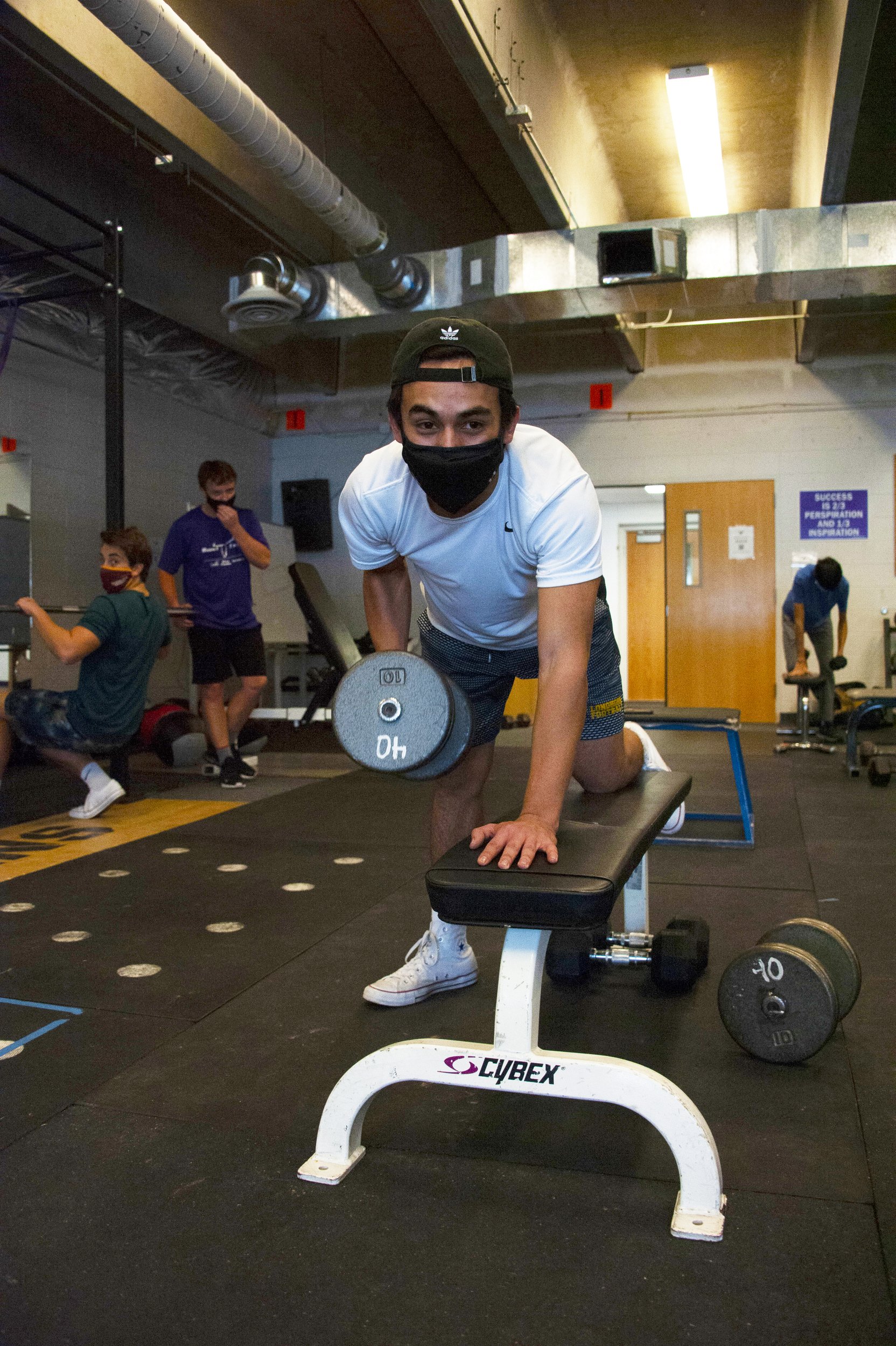 Senior Rulbe Alvarado, who made the all-state team as a Longhorns varsity junior, lifts at the gym as team members watch: junior Sam Sherry, wide receiver and linebacker, and sophomore Trevin Beckman, running back and linebacker. Photo by Roberta McGowan.

It may seem like ages since varsity football was played in town. In fact, the last game for the Longhorns took place November 23, 2019. Never fear, football is finally returning to Basalt with its first game scheduled for Mar. 20, 2021 at home against the Salida Spartans.
As Athletic Director Jason Santo explained, “Our goal has always been the same — to focus on one game at a time,” and not look back or forward. Last year was a good year, he added, “We had nine wins and three losses, which sent us to the 2019 state tournament.”
Unfortunately, Santo recalled, the team was defeated by Delta High School, 17-6 in the Class 2A semi-final game in Basalt. The Longhorns had not been in the state semi finals since 1979.
“We hope we will return to the state tournament,” Santo stated. He estimates that 40 to 50 students come out for the team each year.
Varsity football coach Carl Frerichs was very excited about the upcoming spring season, as he said at a regular team afternoon workout in the weight room at Basalt High School’s gym. He explained that all of the school’s athletes use the same gym workout program called Plat4M. Frerichs also gave much of the credit for the successful early morning start (6:30 to 7:30 a.m.) to Coach Aaron Munch, also the Basalt Police Department’s lieutenant.
Munch noted, “I played football in high school and college,” adding that coaching was a good fit. His interest in supervising the workouts was sparked when he learned that some players had been sneaking into the gym so they could train hard. “These kids want to work out,’ he said, adding they all are motivated and enthusiastic. “I work out also, so, I thought why not come to the school and also help the students?”
Also on board to help sports teams is the Basalt High School Booster Club, founded in 1976. Its members work year-round to raise money for new uniforms and warm-ups — which usually are good for two to three years. The Boosters provide these for every single athletic team. They also cover key non-uniform needs including chairs and carpets for indoor activities, decorative flags and banners for the outside fields. Additionally, they host the annual El Jebowl after-prom parties.
The club began a corporate sponsorship program in 2017. Between 2017 and 2019, the sponsors contributed $45,000 for Basalt’s sports teams.
For more information on this program and new memberships, you can email Basalt High School Boosters president Kristen Boothe at kdboothe@comcast.net
This the first in a series about Basalt spring sports.