Branching Out: Respecting life and death 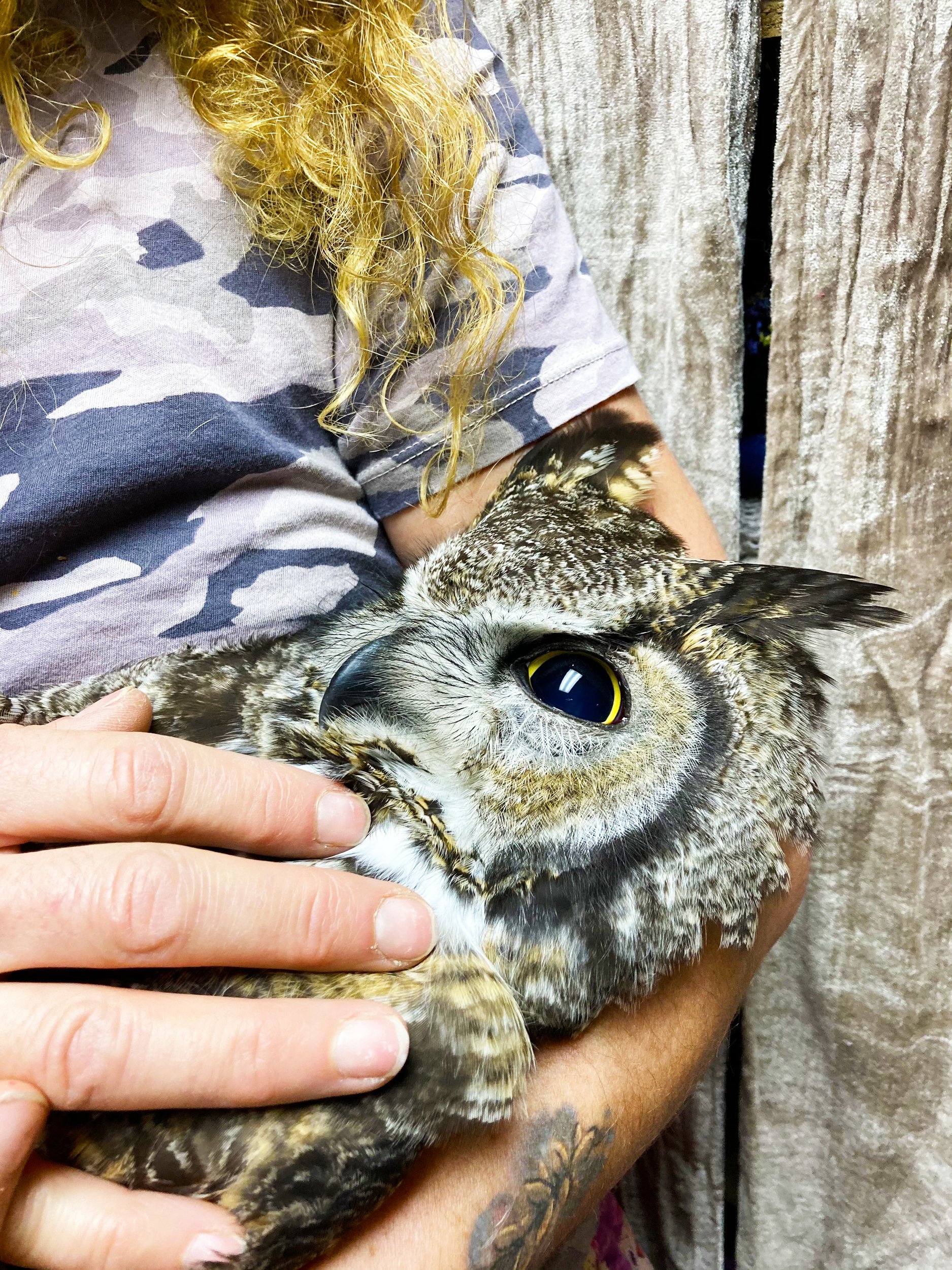 Is a dead animal of value, or just trash?
I’m forced to ponder this after retrieving a dead creature from Highway 133. We didn’t want cars to smash the animal to oblivion.
The night had been exceptionally dark, stars and moon veiled by snow clouds. Not another car was on the road. Amid a thicket of roadside cottonwoods, I saw a small body in the oncoming lane – skunk already – no, wait. A gray cat?
As we approached, I scanned for oncoming headlights, flipped my hazards, and pulled to a stop in my lane. Entering the monochrome wedge of our high beams, we saw not fur but feathers – a blush of ruddy orange?
“Oh my gosh, it’s a red-tailed hawk!” I whispered-hollered.
“Mommy! No, my God, it’s an owl! A great horned owl!” Juniper whisper-squealed.
We kneeled, absorbing the immensity of (his? her?) death and perfection. Stroking his wings and chest, we were captivated. Reality tapped my shoulder and the danger of our situation hit me. I swept the owl into my arms, as I had this very child a decade ago: how very precious, both, I thought. Secure in the car, we headed home.
It was almost midnight and sleep was impossible. In the hush of our living room, we spent the evening getting to know “owl,” as with the fox from this summer, moving beyond assumptions into new, unforgettable experiential “knowing.”
Researching the next day, I discovered the dimpled leather of her feet have evolved for grip friction. Talons, so long they curled in on themselves, capable of an eight-inch spread, make escape almost impossible. Great horned owl grip strength averages 500 pounds per square inch. In comparison, golden eagle talons exert 400; a German shepherd’s bite, 238; and a human’s bite, 126 psi. Had we not found a dead owl, would I ever have come to know this?
Juniper spread the wings through full rotation, unleashing exciting memories of white whooshing wings, gone before I could grasp what I’d witnessed … versus the still-warm vision before us. Juniper folded one extended wing over the other, cloaking face and body like Count Chocula. Our giggles changed to whispers, marvelling over camouflage feather patterns.
Cupping her limp, heavy head, I could feel the very firmament of this species – cranium housing mind, instinct, evolution. His eyes, fringed in lashes and miniscule feathers, were deep glassy orbs over huge golden irises capable of binocular vision. Did you know owl eyeballs are immobile within the skull? That’s why owls have fourteen cervical vertebrae compared to our seven.
Those vertebrae move in conjunction with their ears, too. Owl ears reside not in those great horned tufts, but in the dense ring of feathers circumscribing their “facial disc.” I learned about the tiny muscles which manipulate the filamentous feathers of the disc, channeling sound like a satellite dish to – get this – asymmetrical ears. Offset ears receive slightly different sound waves to zero in on prey. Wow.
What to do with this glorious dead creature?
I called Colorado Parks and Wildlife. Staff confirmed possession is illegal and I was to “double-bag it and throw it in the trash.” The Migratory Bird Treaty Act of 1918 declares that all raptors and raptor parts – even a feather, or a nest – are protected by state and federal regulations.
In this case, a Special Purpose Salvage permit allows one to possess non-living raptors or raptor parts. “Dead specimens collected under this permit may be mounted, prepared as study skins, or otherwise used for educational purposes, including public display,” it states. The “trash” policy is the part that must change. We need more intentional directives.
And that is the real reason I’m writing today. I understand the “why” of this regulation.
However, like Western water law and possession, the world is extremely different today: untenable human population, global warming, climate change, ecosystem collapse, species migrations and extinctions, human disconnect from nature, dwindling stewardship on individual levels, political and corporate foot-dragging …
Treating our wildlife like trash teaches us that it’s trash. I haven’t been able to throw him away. I would rather bury her. She, he – I’m not sure! This owl is not an “it,” mere trash, but something worth honoring. How does one sex an owl? Hands-on learning is compelling. I do want to respect our regs and have inquired with US Fish and Wildlife to secure a Salvage Permit. Already, in my role as a community naturalist and educator, this protected raptor has touched many people in just four days.
An owl in the trash or flattened on a highway is a missed opportunity. The world is changing so fast. Our regs must adapt.