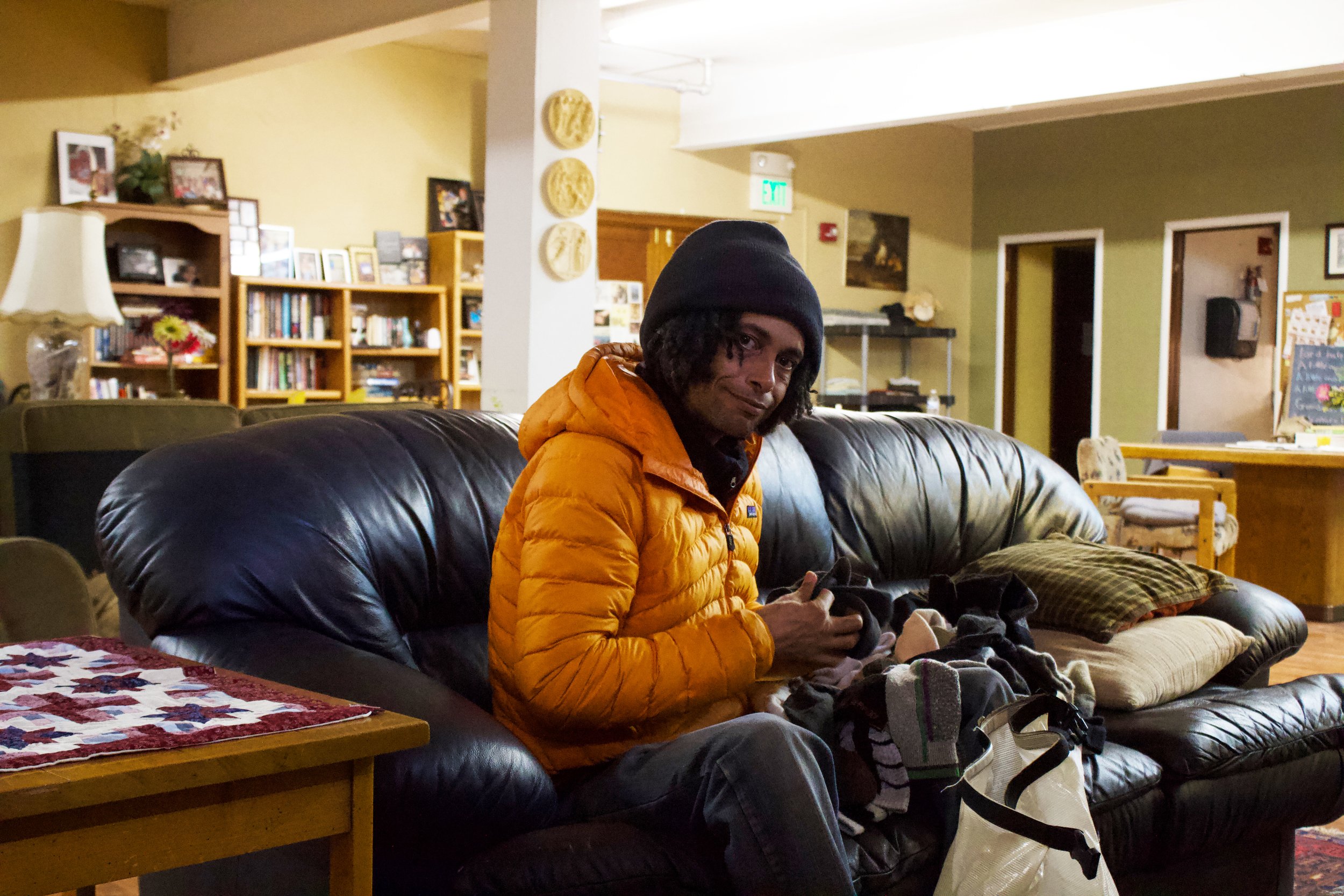 Jesse Brown folds his socks at the Feed My Sheep (FMS) day center in Glenwood Springs. Brown has lived without a home in the Valley for six years and has used the FMS overnight services the last two winter seasons. Photo by James Steindler.

Perhaps the only consensus regarding the homelessness issue is that there is not a one-size-fits-all solution. The sheltering aspect alone is riddled with caveats. There are many more homeless people in the Valley than there are shelter options. But even if there were a facility to house every person, contrary to popular belief, not all would come.
Lynn Kirchner of Carbondale Homeless Assistance (CHA) says that some folks simply do not want to “conform” to societal norms and sometimes that means living without plastered walls or a beamed ceiling.
When CHA started out seven years ago, its volunteers canvassed the homeless population around Carbondale and deduced that those folks were not interested in an indoor shelter. Hygienic support was their top concern and CHA answered the call by providing passes for the Rec Center and Sopris Laundry — previously located at the Sopris Shopping Center.
Kirchner stated that, in the past, homeless folks have taken advantage of overnight shelter options through Feed My Sheep (FMS) in Glenwood Springs or Aspen Homeless Shelter (AHS).

What’s in place
Currently there are very limited indoor shelter options locally for the chronically homeless.
AHS is not operating it’s overnight program this winter at St. Mary’s Catholic Church in Aspen and FMS is trying to keep their regular beneficiaries safe, so they are not taking newcomers due to the coronavirus. FMS currently houses roughly six people. Both of these indoor sheltering options generally function November through March.
Part of the issue, according to AHS Executive Director Dr. Vince Savage, is having to depend on the church for a location. For instance, when St. Mary’s is housing folks, they can’t go inside until after 9 p.m. and must leave the following morning by 6 a.m.
Due to the pandemic, emergency shelter options are available through Pitkin and Garfield Counties. Pitkin County has used CARES funds to house individuals in hotels for temporary stays. Garfield County Spokesperson Renelle Lott stated that, “Staff also worked to develop an arrangement for homeless people who contracted COVID to be quarantined and housed during the pandemic, but has not seen outbreaks in that population.”
There are currently several resources available for rent assistance to deter the “almost homeless” population from becoming so.

Built for Zero
In spite of the constant struggle, a conglomerate of nonprofits and county governments is committed to ending homelessness in the region. Cristina Gair with West Mountain Regional Health Alliance (WMRHA) is heading the movement locally.
“Built for Zero is a national initiative to get to functional zero of homelessness,” said Gair, “It’s kind of a math problem but you take the average number of homeless who you’re trying to house and when you get to a really low percentage where people bid on the list but get housed really quickly then you’ve reached functional zero.”
The State of Colorado promoted the Built for Zero initiative and the Denver Metro community was the first to join the cause in 2016. By 2019, five other Colorado communities had followed suit — one of which is comprised of Eagle, Garfield and Pitkin Counties. The State of Colorado is expected to reel more communities into the fold.
The initiative calls for creating a data list that includes the names of all the homeless folks in the region. From there, case managers work with each individual to try and get them into long term housing. Essentially, “Shelters don’t solve the overall problem,” according to Gair.
“The challenge is that individuals require different levels of housing and support,” she explained, “So those who are chronically homeless often have other things going on.” Case workers use the Vulnerability Index – Service Prioritization Decision Assistance Tool to gauge a person’s needs. “The higher the number, the more likely they need additional support in order to stay housed.” Their mission is to first house people and then set each person up with the resources they need to stay put.

Brick and mortar solutions
In the future, WMRHA intends to build a housing facility to serve the chronically homeless. It’s based on the national “Permanent Supportive Housing” model. WMRHA has received some funding through the Colorado Health Foundation to begin working with real estate developers. “We’re now in the pre-development stage, so there’s still a lot of steps to go but at least we’re getting some traction,” Gair stated. She added that this has worked well in cities but “has been harder to make happen in rural areas.”
It also may not come as a surprise that it is challenging to find affordable property to build on or to refurbish existing structures in the Valley.
AHS also drafted plans for a facility but Savage considers it in the “pipe dream” phase due to similar financial barriers. He has gotten as far as the blueprint stage in designing a state of the art homeless shelter. See last week’s article in the Aspen Daily News for more information. Savage says they’re waiting for a “fairy benefactor” to put up the millions of dollars it would cost to carry out the project.
Regardless of professionals agreeing on the best modus operandi, “It’s important that everyone work collaboratively, because this issue has been around a long time and we need to start moving forward,” summarizes Gair.