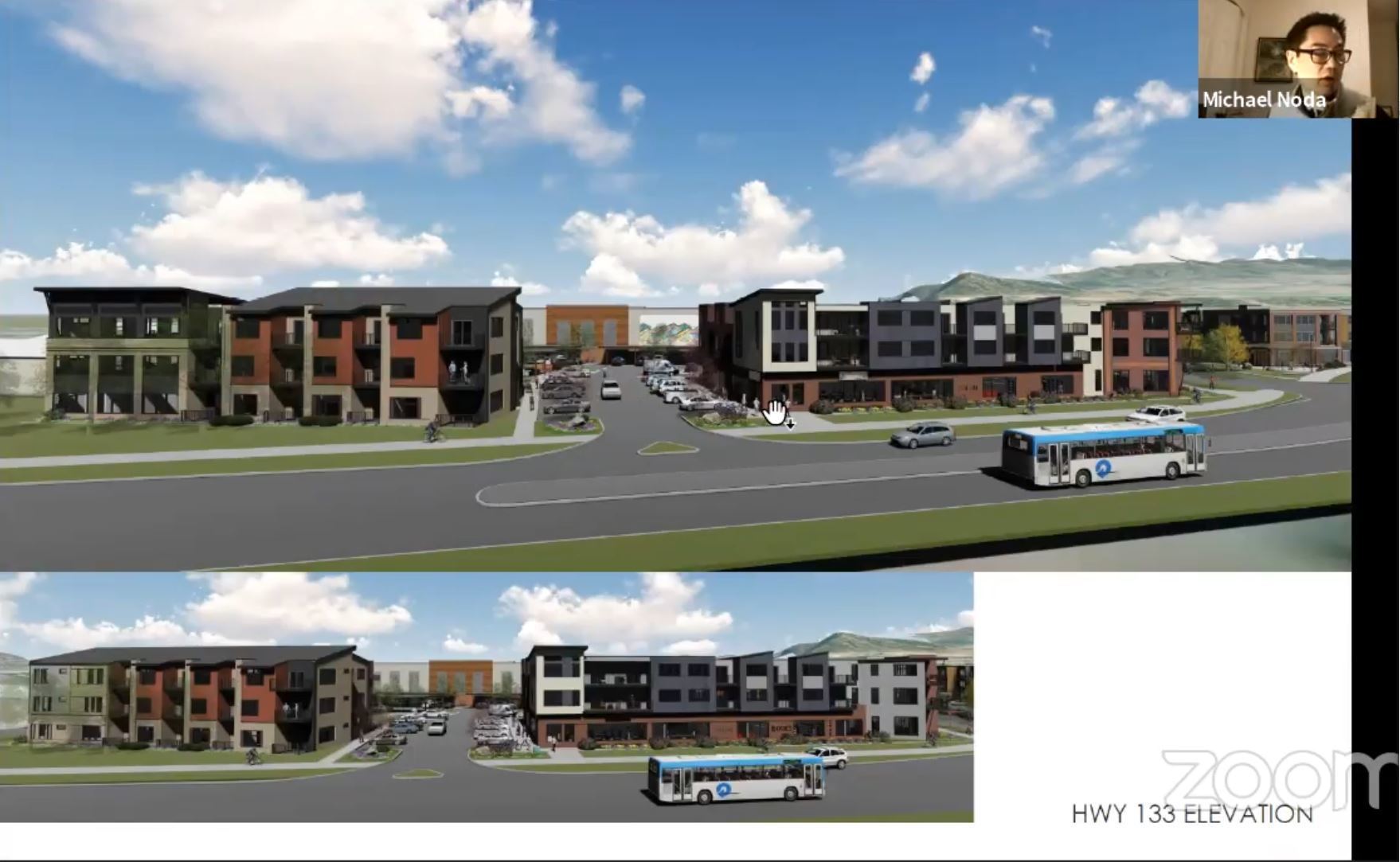 Efforts to make the development "Carbondale funky" include the mercantile aesthetic, a communal plaza, and electric vehicle charging stations. 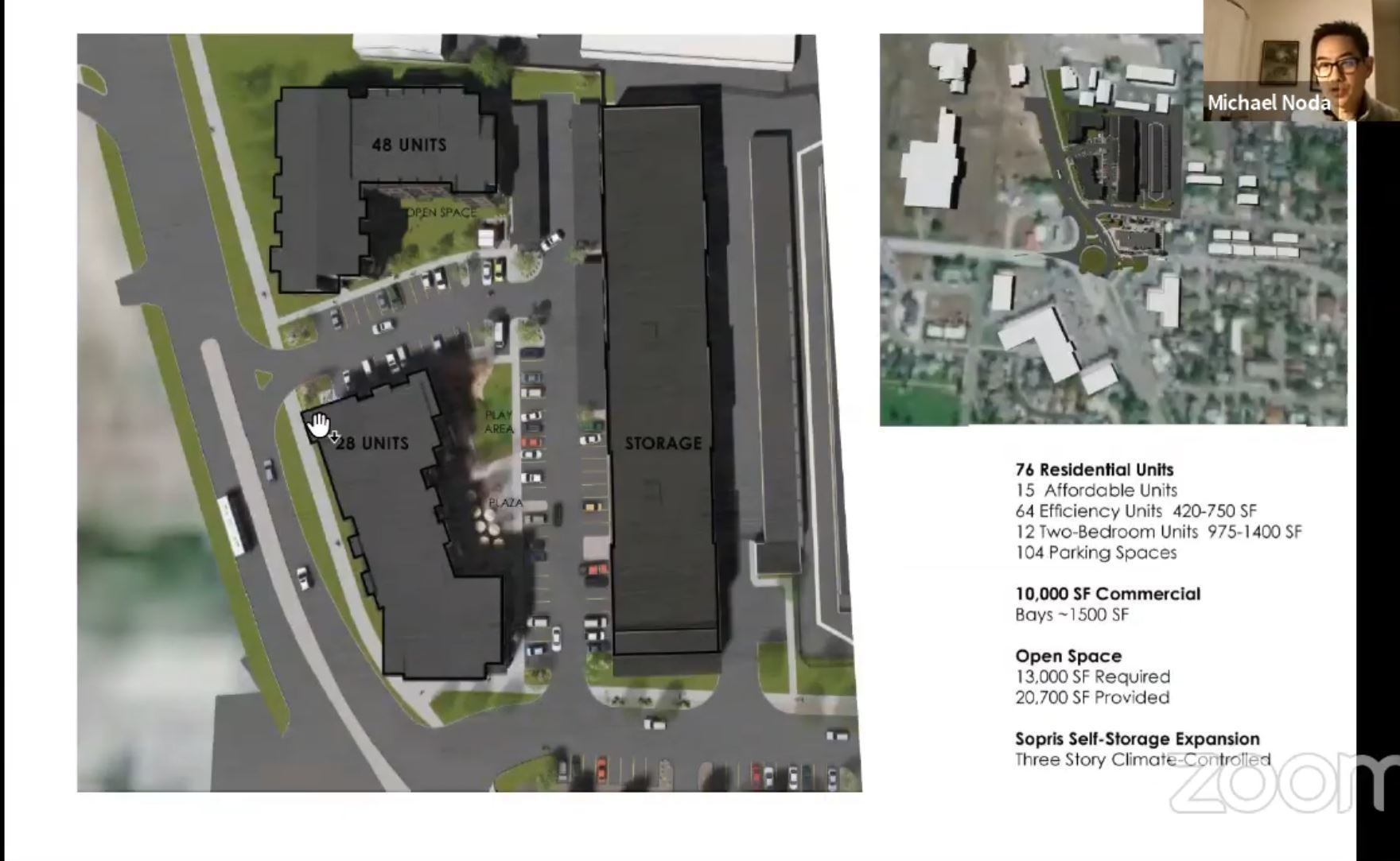 Traffic flow is designed to adapt if the property to the north allows an easement in the future. 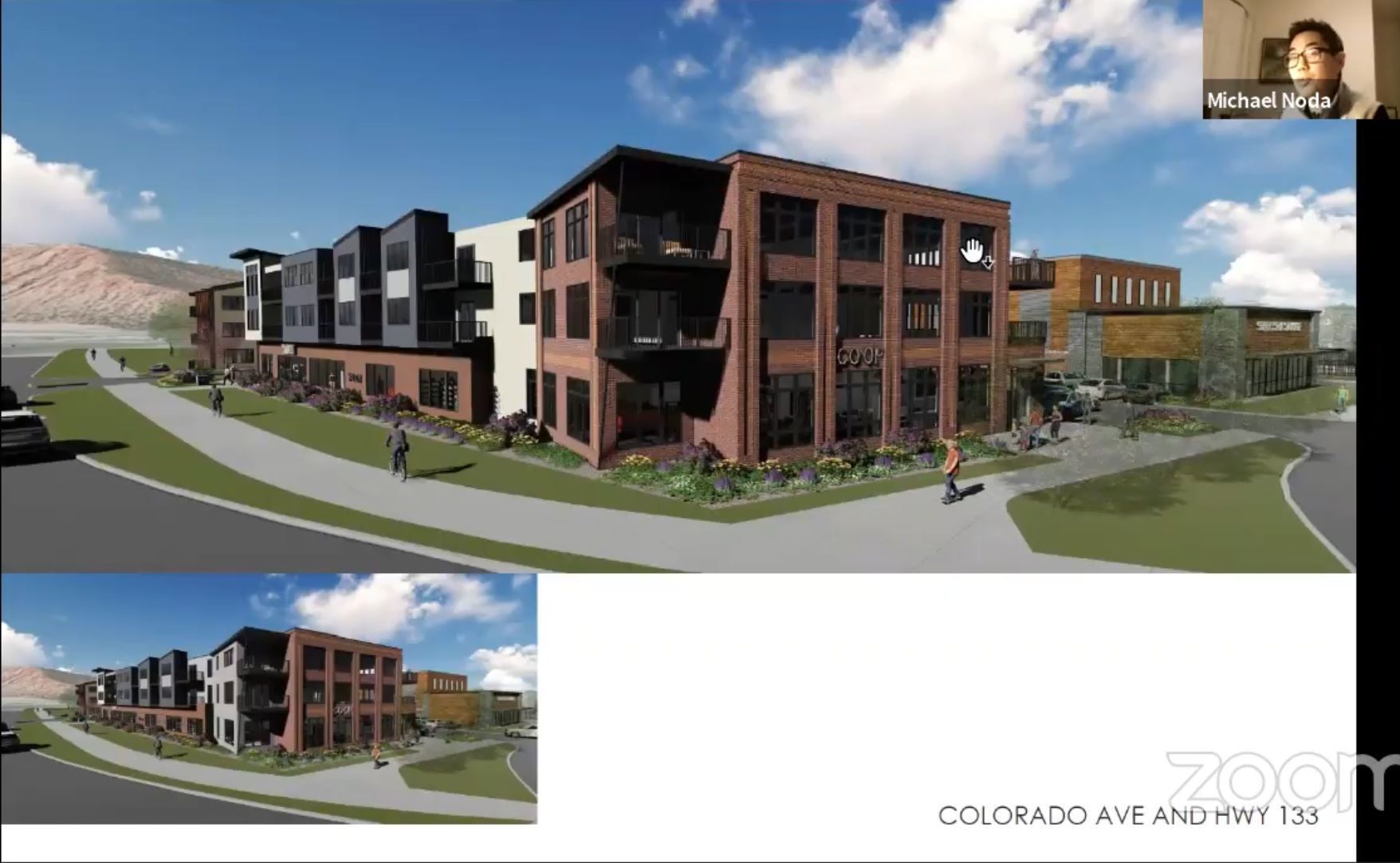 Carbondale Center Place will include 76 residential rental units divided between two buildings with 10,370 square feet of commercial space on the ground floor of the southern complex.

Carbondale Trustees at Tuesday’s meeting approved a Major Site Plan Review presented by Stein Properties, LP and Carbondale Center Place LLC. Redevelopment of the property, which currently consists of The Sopris Shopping Center and Sopris Self Storage, involves the construction of three new buildings with 76 residential rental units, 10,370 square feet of commercial space, and a new 68,000 square-foot, climate-controlled storage facility.
One major concern for trustees was the traffic impact. Yancy Nichol of Sopris Engineering shared a study, based on counting cars pre-pandemic, that suggests this project would result in less traffic than the current shopping center. “I’m comfortable stating that this project would generate less trips.” Stated Nichol, “Or to be really conservative, [the traffic impact] would be equal but not greater than what’s there today.”
Nonetheless, the new traffic pattern, which allows only for “right in, right out” along Highway 133, requires that motorists wishing to travel south on the highway either take Colorado to 8th Street to head in that direction or take the highway south to turn around at the Carbondale Marketplace development where the new City Market is. Nichol considers this configuration, with the anticipated reduction in traffic, to be safer than what is currently allowed with Sopris Shopping Center visitors turning left onto the highway.
The other primary topic of discussion was energy efficiency. It was acknowledged that the new Sopris Self Storage building could be “net zero,” eliminating carbon emissions with the installation of solar panels. Asked about the need for storage units to be climate-controlled, the facility’s owner Dr. Ronald Stein explained that temperatures are maintained only between extremes to avoid damage to contents. Trustee Marty Silverstein concurred that it is an important factor, that people “don’t want their personal possessions ruined by the elements.”
Although the mixed-use building proposed by Loge Properties couldn’t promise to also be net-zero, developer Riley Soderquist insisted that they have worked with CORE and CLEER to design “the most efficient building we can develop in Carbondale” while keeping the housing “attainable.” The team agreed to install at least four electric vehicle chargers, considering it a practical business decision beyond a mandate by the town. It was noted that all trustees mentioned sustainability in their comments. Several trustees also pointed out that this is exactly the type of consolidated development that the current comprehensive plan calls for along Highway 133.
Several members of the public commented both in support of and in opposition to the project. Local chef David Eisenson, who will be renting commercial space across Colorado Avenue also owned by Loge Properties, says that the team has been good to work with. Serving as a chef at Six89, The Pullman, Phat Thai and Town, Eisenson personally witnessed restaurant staff with nowhere to live near where they work. He also says that there’s a need for updated commercial space in the valley and “strip malls from the ‘80s aren’t what maintains our small-town character.” Rather, it’s community engagement and conscientious developers.
Demolition is anticipated to begin in April or May with construction slated to start this spring for the storage facility and by fall 2021 or spring 2022 for the other two buildings. The Sopris Sun was informed that some tenants of the current shopping center were granted until the end of March to remain leasing their spaces. Approval for the project was granted with recognition that the need for a second roundabout on Highway 133 is accelerated. According to Town Manager Jay Harrington, design for that traffic feature is kicking off and engineering, but not construction, is funded. Mayor Dan Richardson was the sole dissenting vote against approval, desiring more time to specify terms.
Other actions at Tuesday’s meeting included awarding Dylan Forbes and Elsa Skagen “Student of the Month;” approving a consent agenda that appoints Britni Johnson to the Tree Board, renews a contract with Red Hill Animal Hospital, and purchases a dump truck and asphalt roller; trustees granted a new liquor license for Ming’s Cafe’s new space next to City Market; and the town contracted PR Studio to assist with communication.
The full meeting is available for review on the town’s YouTube account, “Town of Carbondale Board of Trustees.”