The Sun shines through 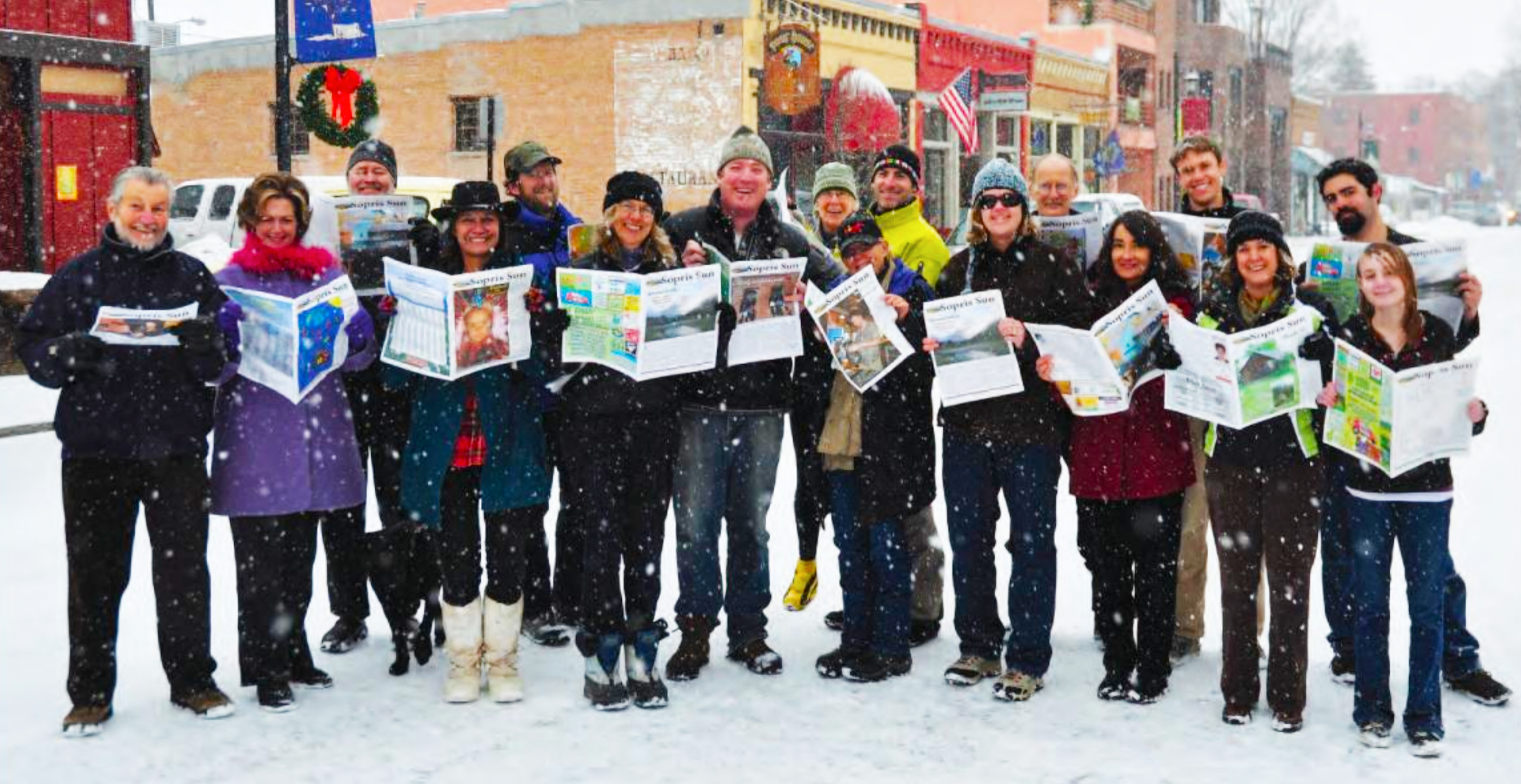 On Feb. 12, 2021, The Sopris Sun completes its twelfth year of informing, inspiring and connecting community. For students of numerology, this is our “golden birthday,” age matching the day of month, as our community paper emerges through its “tween” years. It’s also Chinese New Year, inaugurating the Year of the Metal Ox and all of the good, hard work that implies.
Many changes have occurred over the past dozen years, but circumstances were not so different when The Sopris Sun rose from the ashes of its precursor, The Valley Journal, in February 2009. It was a time of economic uncertainty, with the Great Recession ravaging businesses, and a time of rapidly advancing technology. Swift Newspapers, having purchased The Valley Journal from Morris Communications in May 2003, decided to fold the publication just before Christmas, thus concluding 34 years of telling our local story.
Thankfully, seven intrepid Carbondalians refused to allow the town go without its own newspaper, telling the Los Angeles Times and other media that exploring a nonprofit, independent model “beat the dickens out of sitting around and whining.” In just six weeks, The Sopris Sun was in circulation having since printed over 600 unique issues.
“I’m glad we did it,” reflects Founding Board Member Colin Laird, “We were right in terms of hoping a very community-based model for a newspaper would work in Carbondale.” Laird remembers that his daughter, eight years old at the time, cried when it was announced The Valley Journal would fold. With the help of several newspaper-savvy board members, including Allyn Harvey and Becky Young, The Sopris Sun was dreamed into fruition under the umbrella of the Roaring Fork Community Development Corporation.
Concerned that advertising alone might not revive a weekly paper, these independent media pioneers decided to pursue the not-for-profit model, something virtually unheard of for a newspaper back then. Meanwhile, the economy was struggling and journalism was taking “body blows” with everything migrating online. “Not that this situation has gone away,” continued Laird, “It’s maybe leveled.”
Former Editor Lynn Burton sends gratitude to every board member that put forth the time, effort and energy to keep the paper going. As a news junkie, Burton considers his “Sopris Sun years” among the best of his life and was glad to see the “spirit and vibe” of The Valley Journal carried on through The Sopris Sun. He cites a recent article by James Steindler about the Carbondale Historic Preservation Commission as a perfect example of The Sun’s continued relevance, delivering “well-written, well-timed, important information for town people to know about.”
According to Terri Ritchie, who served as the paper’s layout artist for a decade and recently joined the board of directors, “The paper is instrumental in keeping us in touch with town happenings, the schools and our neighbors.” Ritchie fondly remembers collaborating with “many talented editors and photographers” like Trina Ortega, Terray Sylvester, Lynn Burton, Will Grandbois, John Colson, Jane Bachrach, Sue Rollyson, and “proofreader extraordinaire” Lee Beck. “We often got punchy as we crashed into deadline sending files to press.” Ritchie remembers when finances were especially lean and is grateful to see opportunities expand for the paper.
Burton’s first impression when The Sopris Sun launched was that such an undertaking would be impossible. After a while, he watched it gather momentum as the board developed fundraising mechanisms to augment ad sales. Soon, Jim and Connie Calaway spearheaded the “Honorary Publishers” program and, in her passing, town matriarch Mary Lilly designated a generous bequest to The Sopris Sun. In late 2020, the nonprofit took on a new strategy by hiring Todd Chamberlin as the organization’s first executive director. “You add it all up and the paper is in great shape for making it another twelve years and long after that,” surmises Burton.
In our thirteenth year of striving to most effectively tell the stories of Carbondale and its surroundings, The Sopris Sun will launch a new weekly publication beginning in early March. El Sol del Valle, tucked into the paper’s center, will feature Spanish content including weekly news bulletins, original columns, and culturally-sensitive reporting. It is our hope that this initiative not only helps to inform, inspire and connect our community more fully, but that it also serves as an educational tool for deepening our understanding of each other and both languages.
This venture is made possible initially by MANAUS, a local nonprofit responsible for launching programs like Valley Settlement, Mountain Voices Project and LaMedichi Savings Clubs. According to Executive Director Sydney Schalit, “The Sopris Sun is taking a much needed step in creating and publishing a weekly Spanish-language news insert so that everyone in our community has access to the information that impacts us all. The more informed all aspects of our community are, the stronger and safer our community can become. It’s MANAUS’ honor to support this effort toward language equity.”
For more information on how to support the launch of el Sol del Valle, contact todd@soprissun.com.