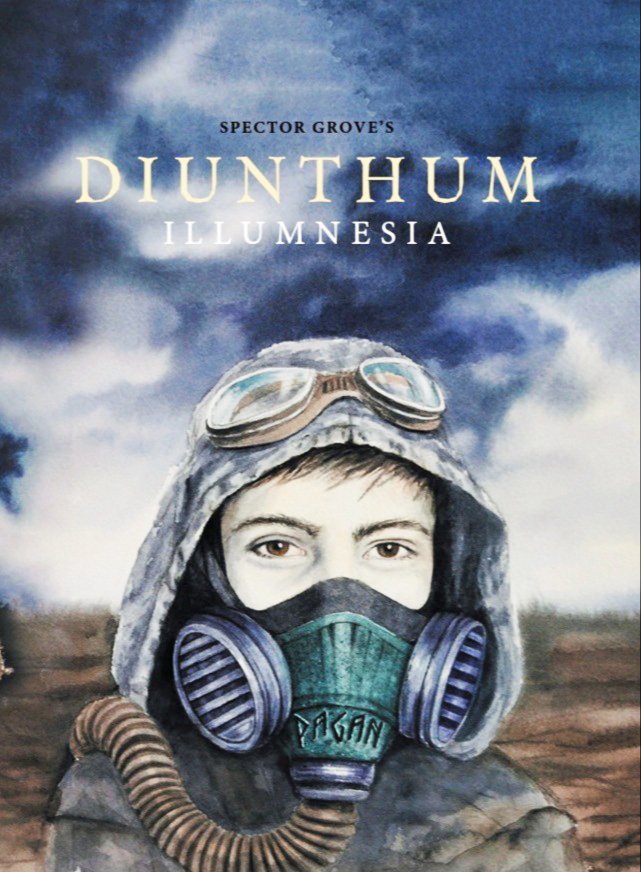 David Anderson remembers his childhood in Carbondale as some of the best days of his life and adds, “It was kind of like growing up in a storybook.”
Last November, Anderson, who writes under the pen name “Spector Grove” published his debut novel, “Diunthum: Illumnesia.” It is the first book in a young adult, science fiction trilogy. Anderson, who is 30 years old, began writing “Diunthum” when he was 19.
The cover art features the main character, Pagan, wearing a gas mask, – a “breather,” as it is called in the book. Anderson and an illustrator finalized the design about six months before the corona virus had made its way to the United States. Since the novel’s publication, Anderson is frequently asked about that gas mask image and replies that it serves as a nod to Diunthum’s futuristic society where the air is toxic.
His father, Chris Anderson, was about 20 years old when he moved to Carbondale from Boise, Idaho. After arriving here, Chris met Rose Porter, Anderson’s mother, who graduated from Roaring Fork High School in the 1960s.
Anderson, who now lives in New Castle, has fond memories of playing at Sopris Park and describes the town as “a constant celebration of life.”
When he was young, Anderson knew that he wanted to be a writer, but he continuously struggled in language arts classes. Then, in the seventh grade at Carbondale Middle School, Anderson had “a tremendous experience that absolutely changed my life.” His language arts teacher noticed that Anderson had a love for writing and asked him to write a small book of poems, telling him, “If it’s good, I’ll pass you; if it’s not, I won’t.”
He wrote ten poems and when the teacher returned his assignment notebook, it had a sticky-note on top marked “A+” with a message that read, “Write these uncontrollably.”
That was the push Anderson needed to become a writer. As he recalls, that teacher “stoked a fire that is probably going to burn until the day I die. He sent me off on a journey.”
While attending San Francisco’s Academy of Art University for film production and screenwriting, Anderson realized his desire to write novels that unravel “the wires of what makes us human.”
A central theme in “Diunthum” is spirituality. Anderson explains that the inspiration for writing the book arose from a “kind of questioning and finding the correlating notes between the various religions of this world and what connects us, instead of what separates us.” He adds, “I think the book has a purpose of bringing people together.”
A bit of creative wordplay adds a bright facet to the read, with invented or archaic words throughout Anderson’s storytelling. As a young child, he would make up words and names. The word “diunthum” is comprised of two Latin words and translates to “when, or while, the light shines.” Anderson enjoys researching archaic words to compound into new ones because “there’s something quite magical about fabricating something of your own.”
Anderson is currently seeking a literary agent and is working on the second book in the series, which has an anticipated publication date of December 2021. He has another five or six writing projects awaiting completion once the third and final book in the Diunthum series goes to the publisher.
Due to current COVID restrictions, book promotions are taking place through online platforms but future plans include in-person book signings. Until then, Anderson hopes that people will buy the book and recommend it to others.
“Diunthum” is enjoying some early literary recognition with a Nautilus Book Award nomination. When asked where a successful writing career might land him, Anderson says even if he were to live somewhere else, “I’ll still always be tethered to my home-base, which is Carbondale, Colorado.”
“Diunthum: Illumnesia” is available for purchase at bookstores in the Roaring Fork Valley or online through Amazon and Barnes and Noble.