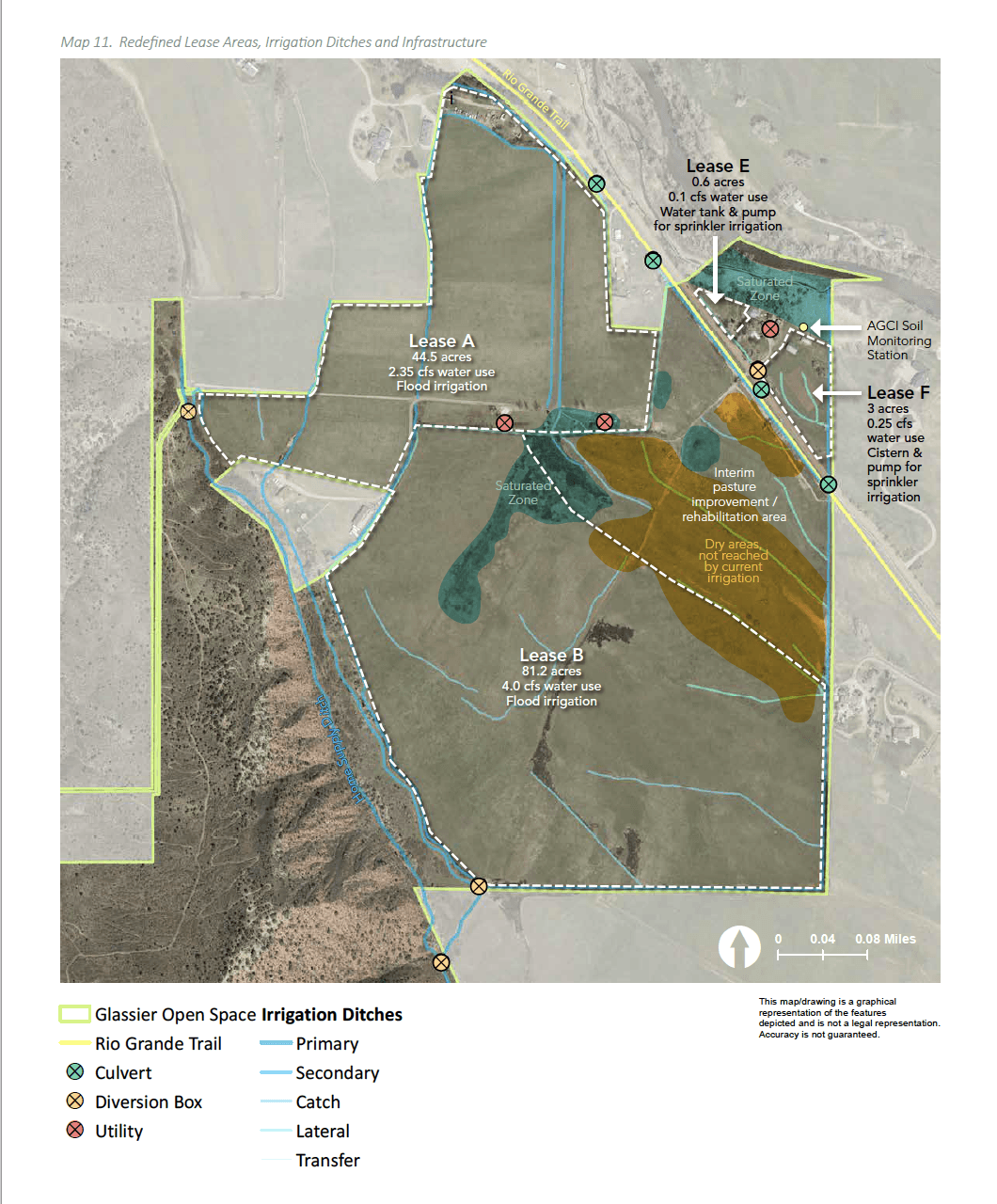 This map of Glassier Open Space shows both Lease B and Lease F, the parcels that were recently opened up to a lease award process through Pitkin County Open Space and Trails. Lease B is 81.2 acres of irrigated pasture and Lease F is three acres that includes irrigation and a loafing shed. Lease A, a 40 acre parcel, will come up for lease in fall of this year. Courtesy map.

At the end of January, a competitive lease application process for Pitkin County-owned agricultural land at the Glassier Open Space property in Basalt selected its winner, the Marigold Livestock Co.
On Feb. 1, 2021, José Miranda, one of the other applicants and founder of Rocking TT Bar, filed a formal appeal contesting the lease award process. Miranda cited concerns about bias and inconsistencies in scoring and procedure. The award process is governed by the County’s Agricultural Lease Bid Process and Policy, which was last updated in 2017, and was created with public input.
In a 5-page letter to Miranda dated Feb. 10, 2021, Pitkin County Manager Jon Peacock concluded, “I can find no reason to overturn the committee’s recommendation, and hereby deny your appeal.” As of the writing of this story, Miranda, who felt Peacock’s dismissal was not thorough, planned to continue pursuing his complaints with the Pitkin County Board of County Commissioners (BOCC) directly.
Pitkin County Open Space and Trails (PCOST) Agriculture and Conservation Easement Administrator Paul Holsinger told The Sopris Sun that he could not think of any other PCOST lease process that resulted in appeal, despite ongoing demand for land.
At the core of the issue is landless farmers doing their best to produce local food in a region with high land prices. PCOST actively manages about 400 acres of agricultural land that is leased out to regional farmers and ranchers in an effort to support local food production. There are more than 10 individual agricultural lease areas that range in size from one half acre to 90 acres. Examples of existing partnerships include cattle grazing on Thompson Creek Open Space in the Crystal Valley and Two Roots Farm on Emma Open Space. One of the primary benefits of leasing from PCOST is long-term stability and a management ethos that doesn’t put lease income first.
Miranda started a local water buffalo herd in 2016 and now has 34 animals. The operation currently provides milk shares to 16 families and produced an average of 90 gallons of milk per month in 2020. Rocking TT Bar also sells beef to consumers, local grocers and restaurants. Miranda is a passionate advocate for his unique work with water buffalo in Colorado, and for environmental stewardship.
The PCOST selection committee received applications from seven operations. There were two leases available and some applicants submitted for one lease, while others submitted for both. Ultimately, the committee recommended Marigold Livestock Co., a new venture from owner Alyssa Barsanti. Barsanti spent the last six years managing livestock and vegetable production for Rock Bottom Ranch, a site of the nonprofit Aspen Center for Environmental Studies. In an interview about her new business, Barsanti explained, “I have grown to be really passionate about livestock and their ability to improve and heal land, sequester carbon and have a positive impact on our climate. With that, I’ve been inspired to start a livestock operation. Specifically, I’m starting with sheep and meat chickens because they seemed like the two most appropriate species to start with, as I do rotational grazing with the animals.”
In interviews with Barsanti and Miranda, they both described similar reasons for applying for the Glassier land. Without adequate pasture, a livestock operation can only support so many animals, and for farmers focused on sustainability, carrying capacity is critical. Lease B is an 81.2 acre irrigated parcel, a meaningful piece of pasture that was pursued by not only Marigold Livestock Co. and Rocking TT Bar, but also Hook Spur Cattle Company and an operation run by Temple Glassier. Barsanti commented, “Had I not been selected I would have been disappointed too. I wouldn’t have appealed. It’s a piece of land and everyone wants to continue their operation on that piece of land, so it becomes really sought after.”
In an interview, Holsinger commented, “The open space program gives a lot more stability in land tenure than any other private person. So I get why it’s something to fight for.” But he also made clear, “I’ve gotten some really nice letters of support from the agricultural community, and people who have asked, ‘what’s going on?’ I’ve just simply told them we’re not deterred from our mission of supporting agriculture. If there are some blind spots that come up, we’ll address it, but otherwise, staff at Open Space is really proud of the program.” The lease recommendation has been tentatively rescheduled for a PCOST board meeting on April 1.
Meanwhile, Miranda perseveres. He suspects flaws in the application system and believes the program is too important to let it go. He’s hopeful that bringing his concerns to the BOCC will improve the system and hold it accountable.
Barsanti is exercising patience. In an interview, Barsanti reluctantly admitted the appeal process has been challenging. “It’s definitely put a damper on the excitement that I have for starting my new business and my excitement for being selected as the lessee.” She continued, “I’m eager to have everything move along and become finalized, and then be the lease holder and be able to start working the land.”