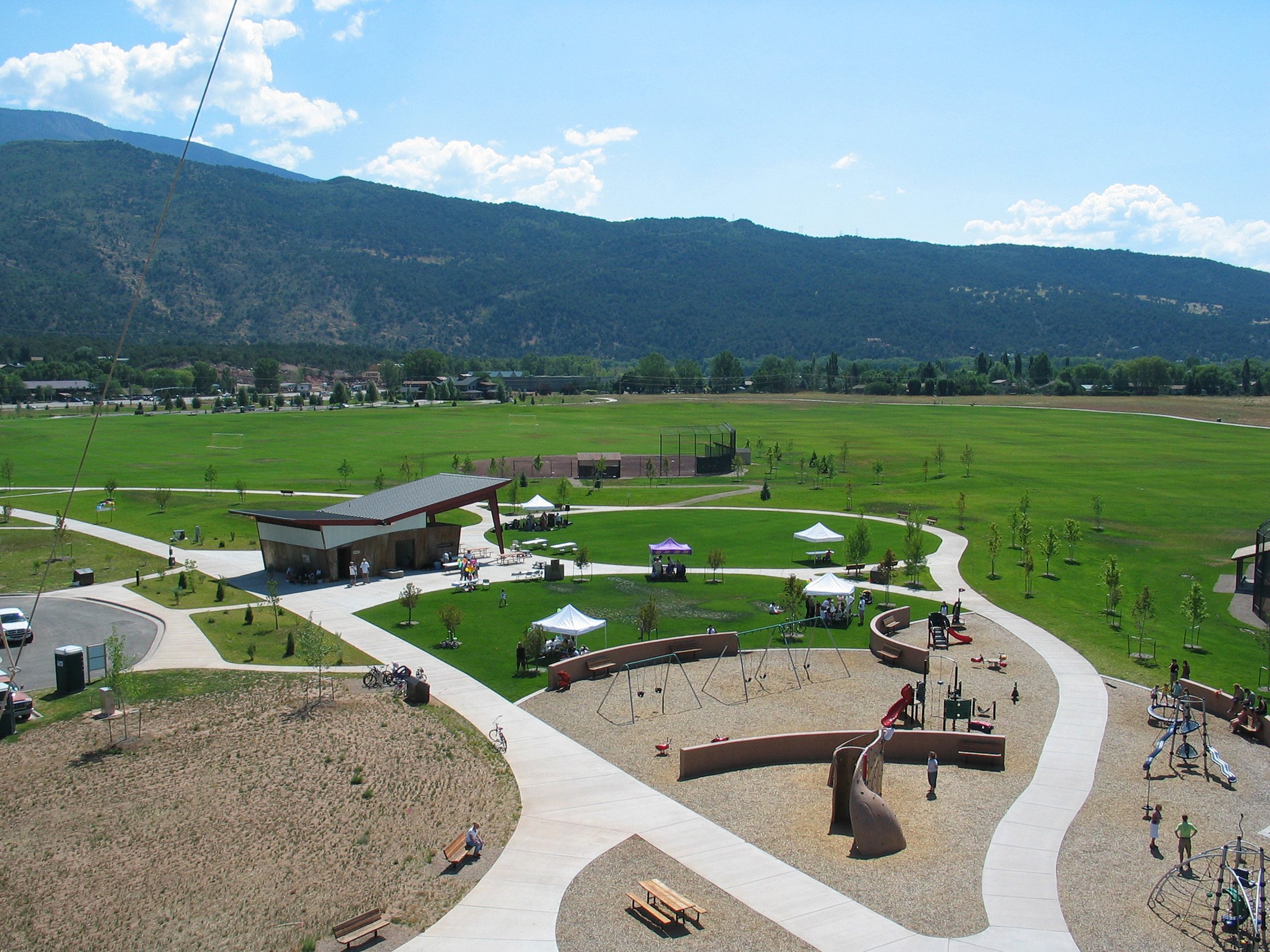 Lush playing fields and other amenities off a variety of recreational opportunities. Courtesy photo.

After much discussion and planning, local philanthropist Sheldon Wolitski determined that an indoor recreation center would not be built on the initial location proposed but instead on another available parcel in El Jebel.
As Crown Mountain Park Board of Directors’ Tim Power Smith explained, “Sheldon’s plan is too big for the site.”
The new project, as Crown Mountain Park Executive Director Rebecca Wagner explained, will hopefully still be located within the large Crown Mountain Park District, encompassing parts of both Eagle and Pitkin Counties, if not on park property.
Wagner described the district boundaries as running from the Eagle/Garfield County line to Old Snowmass Rd., up to Eagle County in Missouri Heights and also to Ruedi Reservoir.
She explained that in 1996, it took an act of the United States Congress for the land known as “Crown Mountain Park” to be switched from federal government land to Eagle County property.
In the congressional act, the land was intended to be used for affordable indoor and outdoor recreation facilities. The park district was formed in 2001, and construction of the park itself started in 2002.
Wolitski said he plans to personally fund the entire project which, he confirms, would cost between $50 million and $100 million and could reach 100,000 square feet before any potential expansion.
The Missouri Heights resident explained his reasons for the large gift as a potential “health, wellness and longevity” benefit to people living in the midvalley.
“I want to accommodate the community’s needs,” Wolitski noted, “Without a tax burden on residents.”
Asked why he is doing this at such a large financial cost, Wolitski responded, “My wife Katie and I decided to set our roots down” and strongly believe in “giving while living.”
His plans include both an indoor and an outdoor hockey arena, an indoor running track, a gym,a field house with playing fields and other concepts at the recreational complex.
“We really need to figure out the best location,” Wolitski said, wanting this “high performance center“ to be accessible.
He announced that although the complex will have a membership fee, scholarships may be available as well as a variable fee structure.
Wolitski is founder and executive chairman of The Select Group, a technical services corporation with offices in Denver. On its website, the firm states that it “encourages our team members to become actively involved in their local communities.”
Another Missouri Heights resident, Ted Bristol, has been involved with the park for many years. He previously served for eight years on the board. He is looking forward to an affordable facility, commenting that “a great deal of people in the area can’t pay for a private club.”
In related news, Eagle County has announced a series of public meetings “to gather initial ideas and identify potential partners for managing the six acres, county-owned and undeveloped, adjacent to Crown Mountain Park in El Jebel, as well as the 70 acres of adjacent National Forest system administrative land proposed for sale or lease.”
Act I is over, but Act II has just played its opening scenes with a new light seemingly shining at the end of the recreation tunnel.
Negotiations are underway between Wolitski and Robert Hubbell, president of Crawford Properties, concerning a 20 acre piece of undeveloped land off J.W Drive which heads directly to the Blue Lake Subdivision.
Hubbell confirmed, although the property is not for sale, he will consider a long-term lease. In addition, discussions are ongoing with Wolitski to construct affordable housing as well.
He noted, “We are looking to lease the land and tying the indoor facility lease to developing affordable housing. Hoping for a win-win for affordable use of the facility and deed restricted housing for the community.”
“This project is still in its infancy,” Hubbell added, “And we have a lot to work out. Hoping things become clear over the next few months.”
Adelle Hubbell, daughter of the original ranch owner Floyd Crawford and widow of Carl Hubbell, with whom she raised their two sons, Robert Hubbell and Prentice Hubbell, remembered,
“My dad bought the El Jebel Ranch, then a farming and ranching operation, in 1961.”
He wanted “to keep the town in harmony with its site,” according to their website. So, Crawford made significant infrastructure and other improvements.
Crawford Properties is a privately held company with approximately 1600 residents and commercial tenants. It consists of approximately 289 mobile home lots, 15 apartments and rental homes, 29 commercial units and an assortment of tenants renting open space for storage. Go to eljebel.co for more historical and current information.