Storms boost the snowpack to near-normal 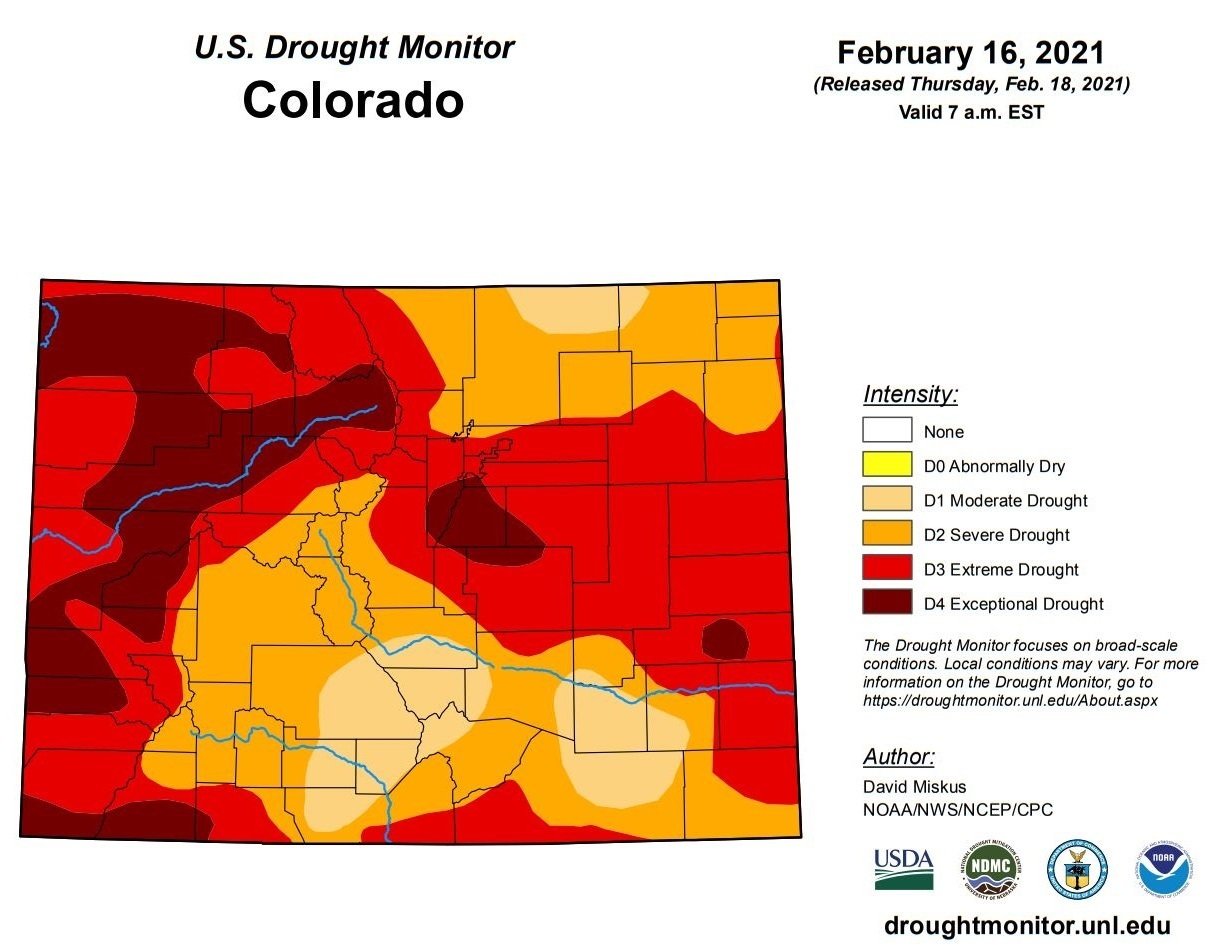 This map of Colorado shows the persistent drought conditions across the state. Maps are released by the Drought Monitor every Thursday. This map reflects improved conditions on Feb. 16, 2021, and takes into account February storms that increased local snowpack. Map by David Miskus.

Colorado ended last year in an exceptional drought. By Oct. 2020, 22% of Colorado was categorized in “exceptional drought.” This number peaked at almost 28%, where it hovered for much of January.
Exceptional drought (D4) is the most severe drought category used by the National Weather Service, and refers to events that occur, on average, just once in 50 years. The second most severe category is D3, or “extreme drought,” and represents events that occur once every 20-50 years. D2, severe drought, is a statistical category for drought conditions occurring once every 10 to 20 years. According to archive data back to 2000, the current D4 drought conditions were surpassed in only 2002, when 34% of Colorado was in exceptional drought. Other notable exceptional drought years include 2013 and 2018.
Last week, the U.S. Drought Monitor finally saw enough snowfall in Colorado to reduce the percentage of the state in exceptional and extreme drought, the first double-digit reduction since October 2020. As of Feb. 16, 59% of the state was in exceptional or extreme drought, down from 70%. However, the long term drought trend remains — 90% of the state is in category D2 or higher.
Meteorologist David Miskus explained, “The improvements were made in the D3 and D4 areas only. It’s more of a long-term drought because you guys had a very bad southwest summer monsoon. So you have that on top of a weak start to the winter snowpack. At least now, the last couple of weeks have been better.” Miskus is the Drought Point of Contact for the
Climate Prediction Center, a program of the National Weather Service.
Miskus wrote this most recent U.S. Drought Monitor Report, and his work was supported by reports from the Colorado Climate Center at Colorado State University in Fort Collins. Their recommendations noted that the improvements had occurred mostly in southwestern and central Colorado, but also clarified that “areas not being improved still have very large deficits and need much more snow before we start improving, like northwest and north central Colorado.”
Locally, the Roaring Fork watershed saw the improvements the statewide entity observed. According to the most recent Snowpack and River Report from the Roaring Fork Conservancy, the snowpack is now at 95% of normal for this time of year, up from about 74% in January. However the report acknowledges, “While this is good news, we need this pattern of snow to continue well into the spring as streams across the Roaring Fork Watershed are flowing at only 53-72% of normal.”
Low stream flows are reflected regionally as well — according to the Intermountain West Climate Dashboard Feb. 17 briefing, “inflow forecast for Lake Powell is 46% of average.” Persistent low soil moisture across the region is expected to keep stream flows low, as soils absorb melting snow, limiting how much water ends up in streams. The Colorado Department of Natural Resources January Drought report states, “Without above average precipitation for the remaining winter months, hydrologic impacts will be more pronounced this year than in 2020.”
Drought planning is happening across the state and region. In Colorado, the municipal portion of the State Drought Mitigation and Response Plan has been triggered. The agricultural action portion of that plan has been in place since last summer.