A caboose comes to Carbondale 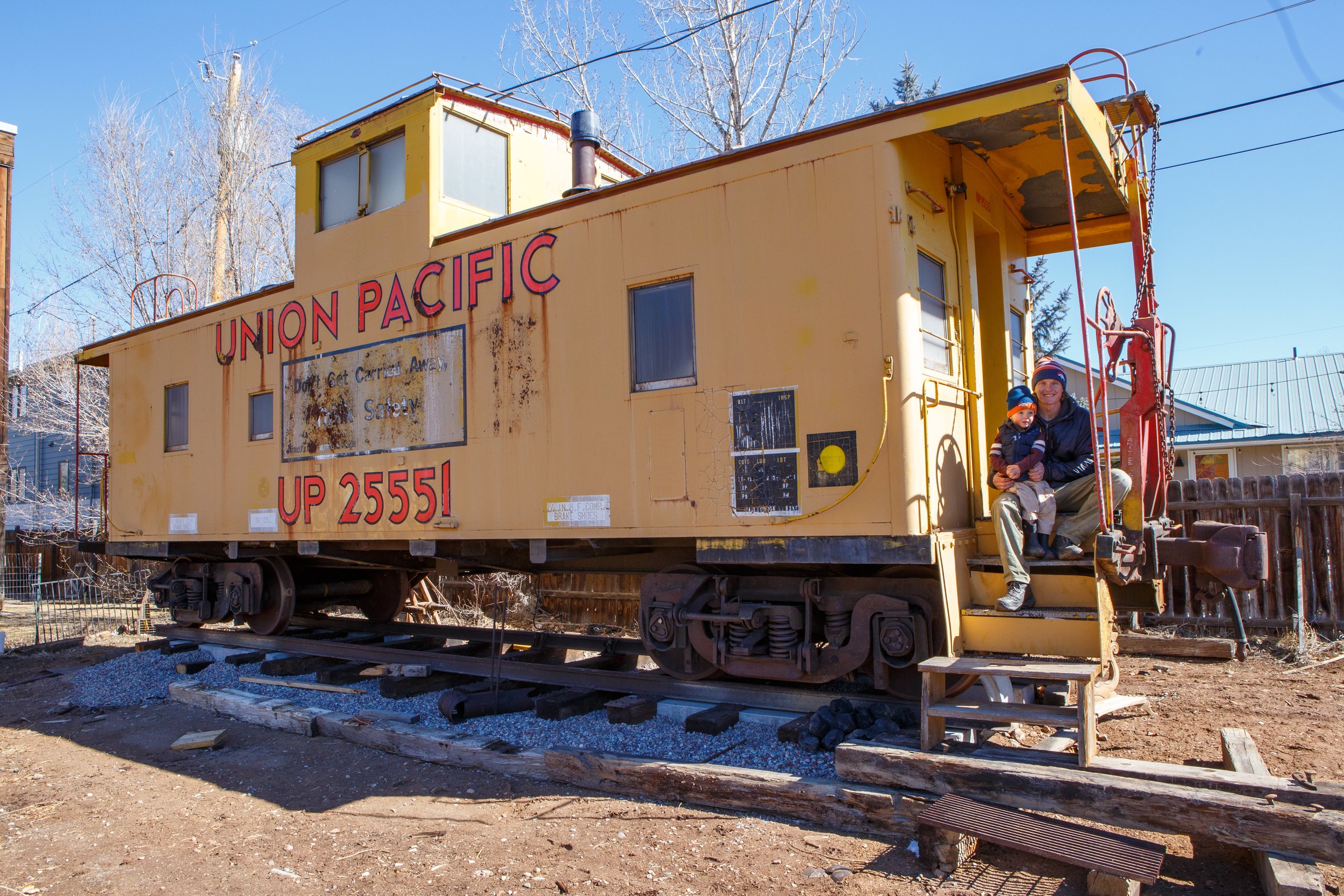 James Ibbotson and his son sitting on the steps of his caboose. Photo by Sue Rollyson.

A caboose, you say? Here in Carbondale? Well, yes, right behind the big yellow house at the corner of 3rd and Capitol. So how did that get here and when? It’s a good story, but first …

The house
According to a survey of historic structures put out by the Carbondale Historic Preservation Commission in 2010, the house at 424 South 3rd Street (popularly called the “Dinkel House”) was constructed by Mary J. Francis in 1904. Francis was a wealthy heiress who purchased a large tract of land south of Carbondale in the 1880s and later donated much of it to the school system.
“Not so fast,” says Sue Gray, vice president of the Carbondale Historical Society. She has been researching the Dinkel family as part of the society’s effort to open a “Dinkel Mercantile” museum in its log cabin property at the south end of Weant Boulevard.
“Everyone knew that it was the Dinkel House for a long time,” she explained, “and I wanted to get to the bottom of [the discrepancy with the 2010 survey].” As part of her work, Gray found the original warranty deed transferring ownership of the lot from Francis to William Dinkel (price: one dollar) in 1893, as well as architectural drawings for the house and a newspaper clipping further distinguishing the Dinkel provenance.
The house was sold by the family after Dinkel’s death in 1918, and it went through a series of owners over the next several decades. In the late 1960s, the house was divided into four rental units which remain to this day. The current owner is Cheryl Heineman, who bought the property in the 1970s. Her son, James Ibbotson, manages the property.

The caboose
So, you ask, how did a 1960s-era Union Pacific caboose end up here?
Ibbotson grew up in Aspen and became interested in its history. Later, after moving to Carbondale, he refocused that interest onto our town. His house, garage and yard are filled with historical artifacts he has collected over the years. Gray noted that he has donated part of his collection to the Historical Society and has been on the outlook for items on the society’s “wish list.”
Last summer, during the heart of the pandemic, Ibbotson learned that a number of items, including the caboose, were for sale at a property up in Old Snowmass. He recalled, “The doctor who owned the property collected all sorts of stuff. I was interested in [the caboose], but they were asking a lot for it.” The estimate for moving the car was also high. Instead, he bought an old ore cart.
By the end of the day, however, the caboose had not sold. The property was being sold and had to be cleared out, so the person running the sale offered it to Ibbotson for free if he could “get it out of here.” He had one month to do it.
Gray noted that Ibbotson initially offered the caboose to the Historical Society, but “because we don’t own any land, we had no place to put it.” So, it ended up at the 3rd Street house.
Ibbotson found a contractor who agreed to do the move for much less than the original estimate. “I had to dig a foundation and lay down ties and track on the concrete. He also had to obtain permission from the town to have the caboose on his property. He did, but it was designated as a shed.
“It all went so smoothly,” he recalls. One day in September, the caboose was loaded on a flatbed truck and began its slow journey to Carbondale. “We got it as low as it could go [on the flatbed] but had some close calls with traffic lights.” When it got to its new home, a large crane lifted it off the truck and placed it on the tracks.
“It may be that all it ever is [is a shed], but I have big dreams for the whole property,” Ibbotson commented, including the caboose. “Being the steward of a historic house, we have a responsibility to keep it [in good condition]. I’ll do what I can to maintain it.”
Because of the modifications to the main house, Ibbotson cannot get state designation as a historic landmark, but both he and Gray hope that Carbondale will give it historic status. That, hopefully, will allow him to apply for grants or other sources of funding that could help with restoration work.