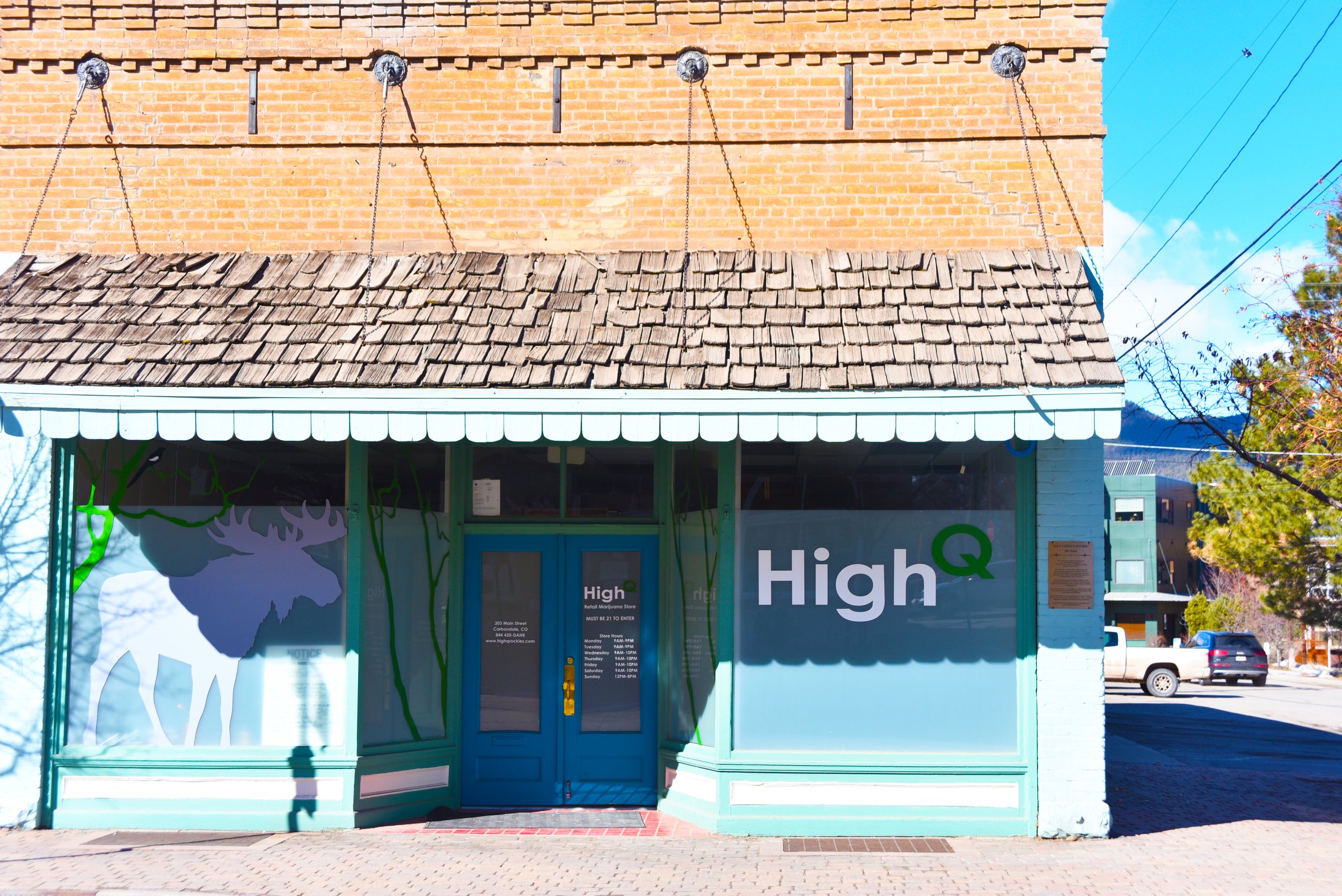 The newly-decorated storefront at 303 Main Street, the former Miser's Mercantile location, will be the new home for High Q's Carbondale store. Photo by Jeanne Souldern.

Redevelopment of the Sopris Shopping Center has left business owners scouting for alternatives. It has been a mixed bag of results, with some businesses closing permanently or temporarily, and others moving to a new space.

One of those relocating is High Q. The retail marijuana store (dispensary) opened at the Sopris Shopping Center in January 2018. They are moving to the front of the former Miser’s Mercantile location at 303 Main Street in downtown Carbondale.

High Q also operates stores in Silt, Parachute, and the Snowmass Village Mall. Renée Grossman, High Q’s owner, says, “I think we’ve done far better than my original projections for the Town of Carbondale. We have a great relationship with the local community and wonderful customers.”

A couple of approval processes need to be completed before the move can be finalized. As a retail marijuana store, the relocation requires approval from the local jurisdiction (the Town of Carbondale) and the state to grant the “transfer of location” for the store’s license. The local approval process will include a public hearing and vote by the Board of Trustees at their regular meeting on Mar. 9.

Regarding the process, Grossman explains, “With the local jurisdiction, it is mostly confirming that the zoning works, which we have already confirmed with the Planning Department. And then any renovations are subject to the building permit, which we’ve secured.” After local and state approvals, she has 120 days to move.

Renovations, which have already begun, include constructing a wall to create two separate spaces – one retail space for customers and the other with a backroom for inventory storage and processing. Grossman adds, “We have to wire the whole place up for internet, some electrical upgrades, and then all of our security and surveillance systems.”

Initially, Grossman struggled to secure a new location. “There’s not a lot zoned for it [as a retail marijuana store], and you’ve got landlords that don’t want the use. The other challenge is that the entire west side of 133, all that property that has the cattle on it, is actually CRMS-owned property, and there are setbacks between marijuana use [business], and a school of 500 feet. It’s a challenging city to find a place to locate.”

Under Colorado law, a landlord must consent to the property’s use. While looking for new locations, the nature of High Q’s business became a sticking point for some property owners. Grossman says she looked at 12 or 13 possible locations. There were three locations where the owners would not consent to the use.

She also wanted to lease in the new 10,000-square-foot building next to the new City Market but the easement agreement for the shared parking lot between City Market and the building also prohibits use by a retail marijuana business.

Before becoming a retail marijuana store owner, Grossman worked as an investment banker and private equity investor. She has also worked on the financial side of the coal industry, first with a coal company based in Colombia, South America, followed by a stint at a now-closed mine in Paonia.

Her understanding of production, distribution and logistics has carried over to the marijuana business. She has used skills from her coal industry experience at High Q’s cultivation facility, Hava Gardens in De Beque. Logistically, “Marijuana is a commodity similar to coal,” according to Grossman

Grossman says she’s “lucky” to have secured the location, which was recently separated into multiple units. Even with the challenge of moving the store, Grossman says, “We’re really excited about the move.  We think that we’re able to secure a good location and good parking.”

The current plan is to close the Sopris Shopping Center store at their regular time on March 13. The Main Street location is scheduled to open by March 17 or 18, to which Grossman adds, “Stay tuned for grand reopening specials.”