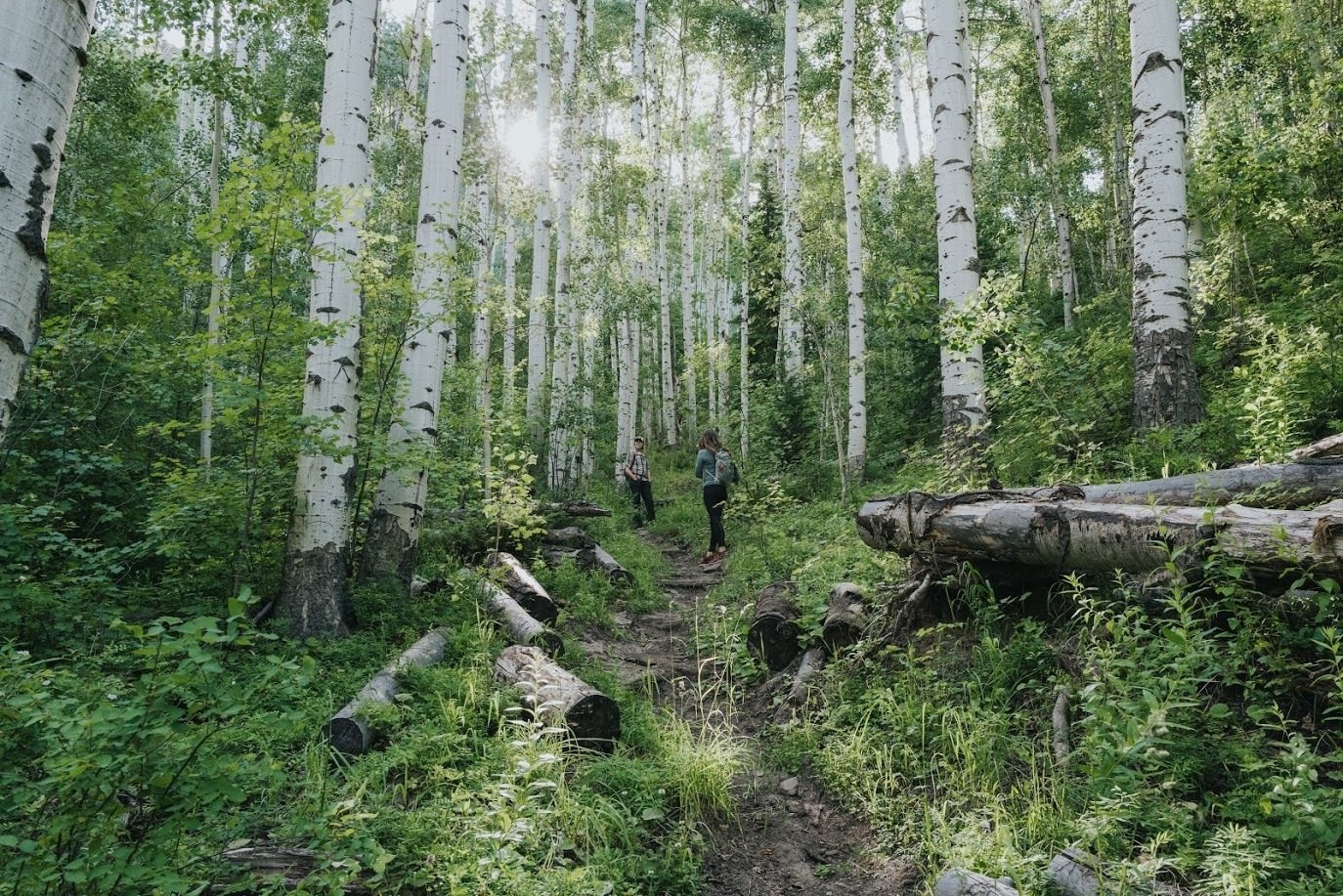 Aspen forests are important wildlife habitat, with rich soils and the second highest biodiversity of any forest-type in the Rocky Mountain West, after riparian forests. Photo by Olivia Emmer.

The White River National Forest (WRNF) is seeking public comment on a proposal to manage aspen forests. The project cites declining aspen forests due to drought, insects, disease, wildfire suppression, and browsing pressure.
The WRNF’s motivations for preserving and expanding aspen forest-types include “their scenic value, the important wildlife habitat they provide, and their potential to help mitigate large wildfires,” said Acting WRNF Supervisor Lisa Stoeffler in a recent press release.
Aspen (Populus tremuloides) forests are “the most biodiverse forests in the Rocky Mountain West, with the exception of riparian forests.” That’s according to Paul Rogers, director of the Western Aspen Alliance at Utah State University. Rogers explained, “where there’s aspen there’s relatively more moisture and the soils are richer. That gives you a wider variety of plants which are inhabited by a wider variety of animals.” In contrast, coniferous forests tend to have less rich soil as acidic needles accumulate. “Seral” aspens, or aspens that experience succession, are eventually outcompeted by conifer trees if there is no disturbance that favors the fast-growing aspen.
While the White River Aspen Management Project describes a condition of aspen decline, one criticism is that, “the project description makes assertions about a decline in the surface area of forest dominated by aspen but does not provide any actual data on recent trends.” That feedback comes from Thomas Veblen, Professor Emeritus of Geography at the University of Colorado. Veblen continued, “Without quantitative information on changes in the extent of aspen in White River National Forest, it is not feasible to evaluate if recent trends justify any vegetation management.” However, the professor also explained that, “to the extent that reducing the size and severity of future wildfires is a goal, the proposed treatments are justified.” Aspen forests burn less well than conifer forests.
According to Dominik Kulakowski, a professor of geography and environmental science at Clark University who has studied aspen forests in western Colorado since the early 2000s, “on the one hand, there’s this direct effect of climate, which is causing aspen to die in certain areas. But on the other hand, climate is also driving a combination of disturbances that, based on what we’ve seen, is actually favoring aspen over the conifers that otherwise dominate the landscape.” Kulakowski continued, “Our research has shown that there is actually more aspen in the White River landscape than there was about 130 years ago, prior to widespread wildfires of the late 1800s … those same forests are again successionally transitioning to conifer.” Current trends of more frequent, larger, and more severe wildfire may again favor aspen expansion.
The project is being managed by Silviculturist Brett Crary of the WRNF. Crary explained that their goal is to describe a condition that they’ve observed in the forest and to allow for flexibility in management response across a very large forest area. There are over 600,000 acres of aspen in the White River forest. Of those, 375,000 acres could qualify for treatment, being not in wilderness or roadless areas. Crary referenced a study that is currently underway, using aerial data to document cover type change across the forest, and he’s hopeful that this mapping will aid them in subsequent steps of the project, where they would identify specific treatment areas appropriate for management.
In this case, the management they are referring to is prescribed burns and cutting. Aspens are adapted to disturbance and typically respond to it by sending up “suckers” from their roots which can ultimately become new tree stems. The project describes a maximum of 20,000 acres, or 3% of current aspen forest in the WRNF, treated per decade. Both land managers and researchers cautioned that an important variable here is browsing pressure. There is evidence that in aspen forests with a lot of browsing, animals can consume enough young aspen shoots to prevent forest regeneration. When browsing pressure is combined with drought and disease, this can spell the end of an aspen grove.
According to Randy Hampton, a spokesperson for Colorado Parks and Wildlife (CPW), the primary elk herd on the WRNF, the White River elk herd, peaked in population at about 53,800 animals in 2001. That population is now at 45,000 with an “objective population” range between 32,000 and 39,000. In 1953 that herd was counted at 7,700 animals. While the White River elk herd is currently above CPW’s objective, the smaller elk herds that frequent the Roaring Fork River Valley, the Avalanche Creek and Fryingpan River herds, are currently in their “objective ranges.” Mule deer are a slightly different story, with populations generally below CPW’s objectives. There are three deer herds across the WRNF: the Rifle Creek, Sweetwater Creek, and White River herds. The White River herd is the largest, currently counted at 36,500 animals with an objective of 67,500. In addition to wildlife populations, grazing leases on public land for cattle and sheep also contribute to browsing pressure.
When asked about how the WRNF would manage browsing pressure and variable conditions on treated forests, Crary said, “I do anticipate there being long term monitoring associated with this project. Right now, when we do harvesting we’re required under the National Forest Management Act to do regeneration surveys to make sure that areas are in fact coming back – it’s a law we have to follow. So we have crews go out and actually establish plots and basically do monitoring to make sure that they’re coming back successfully. And if they’re not, we’re required to make sure that they do. I anticipate we’re going to develop something similar for the burn areas.” Crary emphasized that this type of feedback is something they are hoping the public engages in as part of the public comment period.
To make public comment visit www.fs.usda.gov/project/?project=59419 by April 20, 2021.