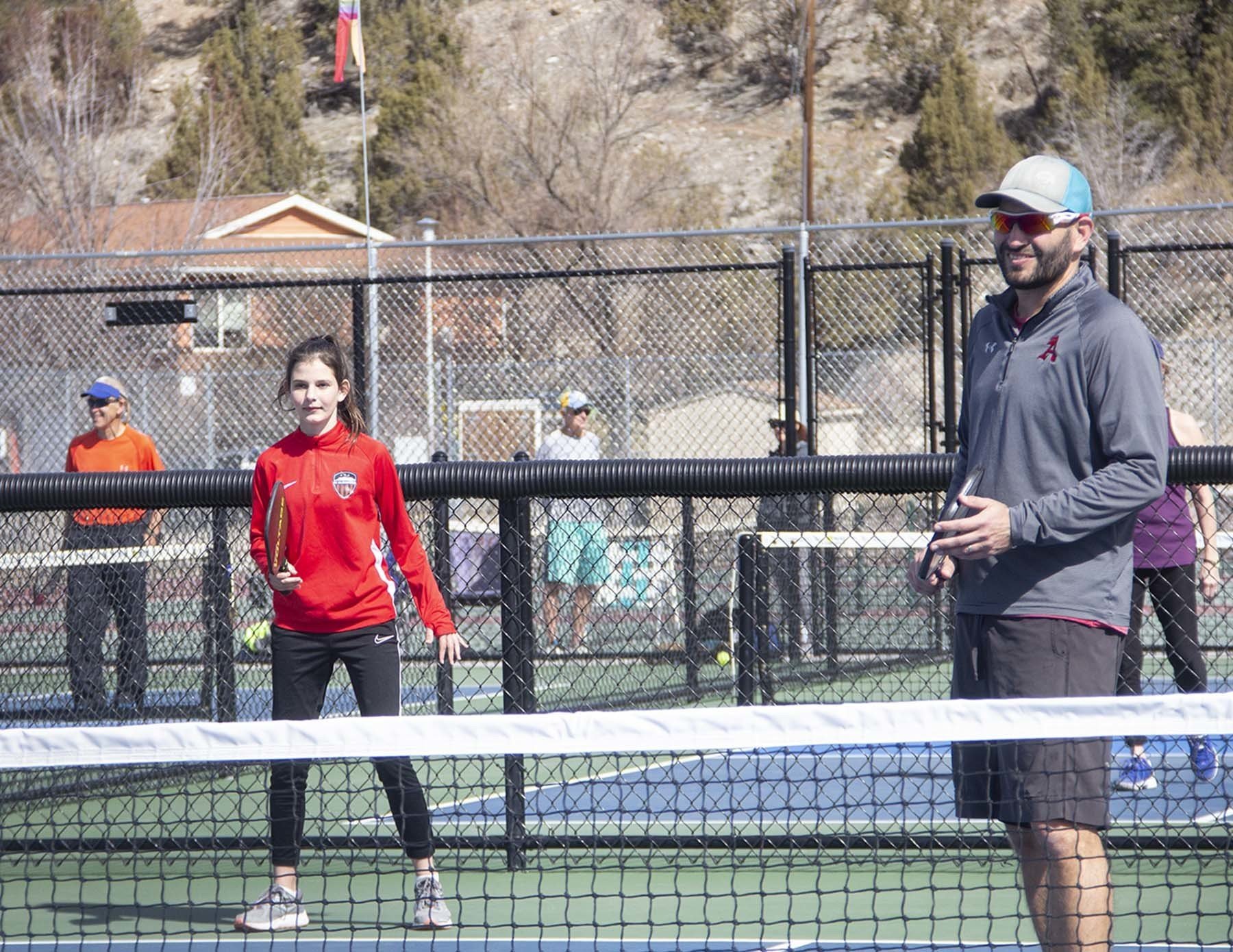 Scott and Emery Zevin were among the pickleball players celebrating the onset of spring with the opening of the Young-Calaway Alpine Bank Pickleball Courts in Carbondale last Saturday. Players flocked to the courts over the weekend but the celebration was short-lived, thanks to Mother Nature. Photo by Jane Bachrach.

Student of the Month awards were presented to Jack Dahl and Manuela Perez.
Mayor Dan Richardson shared a statement regarding the Michael Francisco case, emphasizing that an independent and internal review of what occurred will be conducted after the final resolution of the municipal court case. The statement also explains that because the town prosecutor works independently, it is not possible for Trustees to have charges dropped.
Marty Silverstein announced that second Sunday concerts are intended to return this summer in Sopris Park if possible.
Ben Bohmfalk suggested that Zoom meeting fatigue may be contributing to hard sentiments around public processes. Mayor Richardson affirmed that he is in dialogue with Town Manager Jay Harrington to return to in-person meetings with a virtual option as soon as April.
The consent agenda included accounts payable amounting to $182,845 with items of particular expense including $49,509 for February trash service, $9,800 toward the 2020 audit, $13,223 for ditch maintenance, $5,620 in attorney fees, and $1,500 to Carbondale Homeless Assistance.
High Q received final approval to begin operation on Main Street.
Balentine Carbondale Holdings, LLC was allowed to place a Dolores Park Condominiums unit for sale on the free market, released from a 2008 Community Housing Agreement to provide seven deed-restricted housing units in Building B. Building B was never built by Balentine, instead the lot was sold to Aspen Pitkin Employee Housing, Inc. which is now constructing Red Hill Lofts, comprising 30 deed-restricted rental units. Trustees approved this with notable discomfort, determined to avoid similar predicaments in the future. Heather Henry and Luis Yllanes cast the dissenting votes.
High Rockies Harm Reduction was introduced by Executive Director Maggie Seldeen with the intention to establish a fixed site in Carbondale in 2022.
Public comment regarding the 8th Street project was also heard.
All town meetings are available for review on the town’s YouTube channel, “Town of Carbondale Board of Trustees.”

Bike, Pedestrian and Trails Commission voted to recommend that trustees approve Option B for the 8th Street project. This option removes parking on the west side of the street and adds nine-foot sidewalks on each side. The item will be on the board agenda for formal action on April 13.

Ditch work continues at Thompson Corner and two flumes are being installed on the Weaver Ditch.

The Integrated Weed Management Plan was approved and is available for review at carbondalerec.com/rec-misc/parks

Where My Peeps At? The annual scavenger hunt race is scheduled for April 3 and is now registering teams of two to six people.

The Police Department is creating a Virtual Citizen’s Academy. More information will be shared in April.

Planning and Zoning meets on March 11 to discuss a Minor Site Plan and Conditional Use Permit for an ADU above a new attached garage in Colorado Meadows. There is also an application for Rezoning, Preliminary/Final Plat, Site Plan Review, Special Use Permit and Alternative Compliance proposed for a new ANB Bank building along Highway 133. For the public to comment, an email must be sent to msikes@carbondaleco.net by 4 p.m. on March 11.

Spring Cleanup and Waste Diversion Day is scheduled for April 24 from 8 a.m. to 2 p.m.

From Feb. 5 through March 4, Carbondale Police handled 946 calls for service, including the following cases of note:

Wednesday, Feb. 10 at 10:46 a.m. Upon investigating a possible protection order violation, 47-year-old woman was arrested on two active warrants.
Wednesday, Feb. 10 at 7:14 p.m. Dispatched to a disturbance at the Carbondale Pool, a man punching the back of a bus stop tried to escape by bicycle when approached by officers. The short chase nearly reached the roundabout. He was arrested and released on a summons for criminal mischief, disorderly conduct, obstructing government operations and resisting arrest.
Friday, Feb. 12 at 10:56 p.m. Responding to a reported disturbance on Roaring Fork Ave., officers encountered a domestic violence situation, arresting a 26-year-old man.
Friday, Feb. 19 at 1:10 p.m. Officers responded to a report of a stolen 10 Pro Max cell phone at Dos Gringos.
Thursday, Feb. 25 at 3:43 p.m. A welfare check for a stumbling man led to a ride home and summons for a man after he attempted to cross the highway, running in front of an incoming vehicle.
Tuesday, March 2 at 9:52 p.m. Officers responded to a reported cold robbery. The caller was allegedly attacked by juveniles at Sopris Park who stole his headphones and identifying documents.
Wednesday, March 3 at 9:41 p.m. An arrest was made after a vehicle traveling without a license plate was found to be piloted by a man with a warrant out for failure to appear on traffic violations.