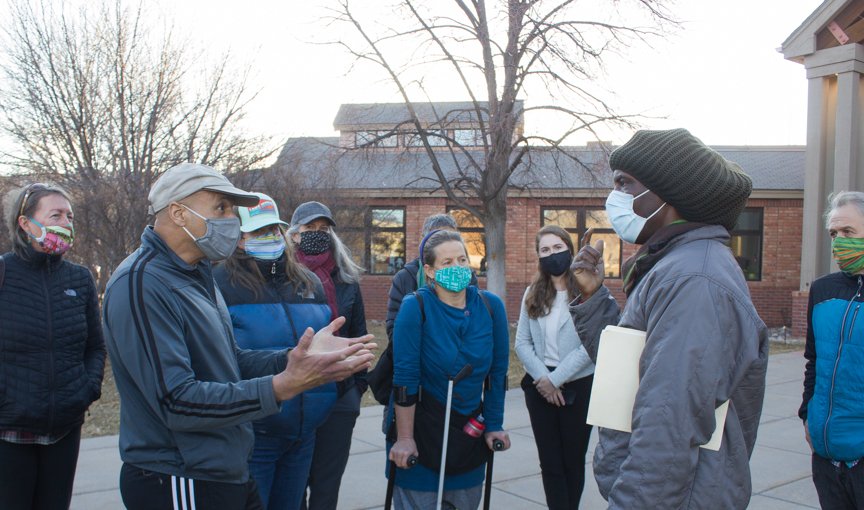 Michael Francisco (right) engages in conversation with supporters, including Ed Troy (left), outside of Town Hall.

Michael Francisco appeared for another hearing in Carbondale Municipal Court the afternoon of March 8. It culminated in yet another continuance — the third of a series since Jan. 11.
Expecting a large turnout, which they were right about, the Town of Carbondale limited attendance to 25 people inside the make-shift municipal courtroom (the community room at Town Hall). Latecomers packed the lobby area peering inside attentively, while the remainder waited outside the building. A few uniformed Carbondale Police Department (CPD) officers were also present leading up to the hearing.
Francisco’s attorney Michael Edminister addressed the court, “I think that we’re in a position where we either have to request the town to dismiss the charge — which I would do — or you set this over in order for City Market (CM) to comply with the subpoena,”
Prior to Monday’s hearing Prosecutor Angela Roff initiated a subpoena, which the judge signed, to acquire CM’s records regarding its investigation of the incident on Christmas Eve. The police department subsequently served the subpoena and CM’s attorney said she would respond by March 15 which both parties agreed to.
Edminister said that in reviewing discovery — evidence turned over by the prosecutor — “There is sufficient information contained in those reports to dismiss these charges today.” Considering that, he requested that the case be dismissed, but if not would agree to the case being continued to bide more time for CM to reply to the subpoena.
Edminister also brought it to the court’s attention that he’s had trouble viewing/hearing a couple of media files released by the prosecution. According to Prosecutor Roff the files are “proprietary” and require a certain program to watch/listen to. Edminister verbalised his assumption that the files in question likely contained police body cam footage. Prosecutor Roff acknowledged that, “There are two body worn cameras that have sound.” Roff assured the court she would coordinate with Edminister to ensure he can open and view the original files. To date, neither Edminister nor his client, have viewed any body cam footage.
After the hearing, a group swarmed Edminister and pressed him with inquiries. Edminister brought up that he’s been puzzled as to why this case is being litigated in municipal court and not county — a decision generally made between law enforcement and prosecutors.
The case was continued to April 12 at 4:30 p.m. According to the defense lawyer, Francisco has not been offered a plea bargain in the case.

A collective perspective
Francisco spoke with KDNK News Director Amy Marsh, “I feel like I’m in a place where I shouldn’t be,” he stated and thanked people for being there in support.
“I’m supposed to be referred to as a Black person but these are so called adjectives that don’t describe who we are, because we are humanity,” Francisco told Marsh, and added, “Once they called in the description, it was my outward covering that led them to approach me.” For the full interview with Marsh, visit KDNK.org.
Outside the building Francisco was greeted by supporters with whom he spoke at length. A scene presented itself: white people listened as Francisco and a couple of other local Black people shared their perspectives, “For us, we’ve been programmed whenever we see the police there is a fear that comes over us,” Francisco stated.
“It’s internalized oppression,” said Sierra Jeter, a Black woman who has lived and worked in the Valley for the past two years. “Because it’s happened so much — it’s happened to our family members, our ancestors — there is generational trauma that we’re dealing with in our community.” Jeter works as a community organizer for The Colorado Trust which aims to “ensure that all Coloradans have fair and equal opportunities to lead healthy, productive lives regardless of race, ethnicity, income or where we live.” However, Jeter did not show up in her professional capacity but as a concerned citizen, “I came to Michael’s hearing because I have a finger on the pulse of our community, and Michael’s story is not in a silo.”

Prior encounter
On Thursday, March 4, it was mentioned on a KDNK radio show that Francisco had been approached by law enforcement on a separate occasion when heading into work at Carbondale CM. Francisco’s attorney corroborated the assertion.
Reportedly, Francisco was working nights at the time and had picked up a shift to help out at the new Carbondale CM (Francisco typically works at the Aspen CM). One Saturday night around 11 p.m., he was waiting outside to be let into the Carbondale store. At that point, law enforcement approached and questioned him as to why he was there. “Before things could have escalated,” his attorney stated, another employee appeared at the door to let Francisco inside.