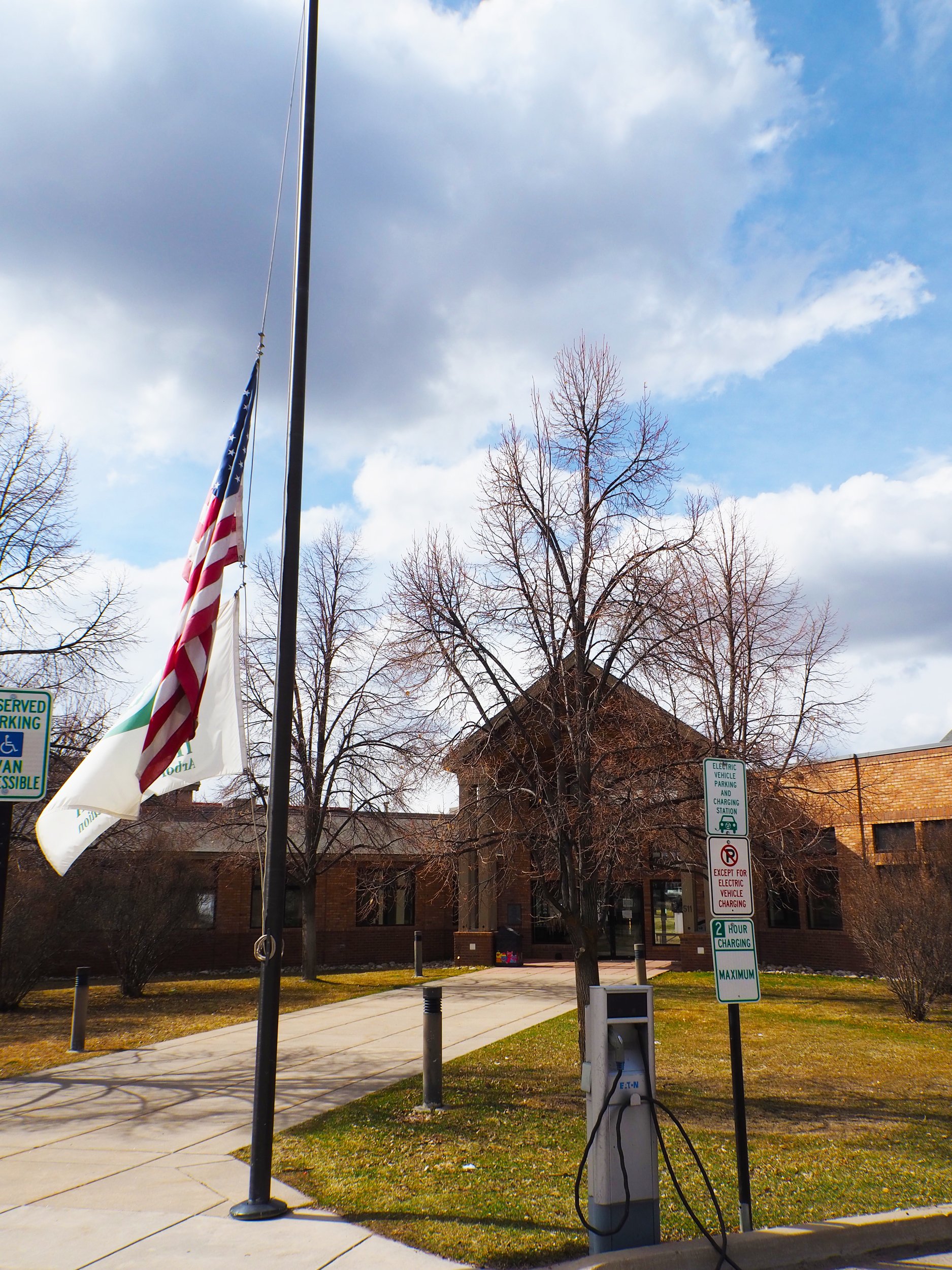 Carbondale's flags flew half-staff on March 23 to mourn the senseless loss of life that transpired in Boulder one day previous. Photo by Raleigh Burleigh.

Carbondale Trustees convened their regular meeting on March 23. Trustee Ben Bohmfalk led the meeting with Mayor Dan Richardson tending to a family emergency. All other trustees were in attendance.
Consent agenda was approved. This included accounts payable totaling $261,672. Items of particular expense include $26,999 for a utilities van from CUES, Inc; $29,600 for special programs like event sponsorships and the farmers’ market; $44,000 for Nettle Creek Pump Back Project engineering services; an annual payment of $17,000 to Insight Public Sector for Microsoft 365; $15,623 to equip the new police vehicle with radar and other tech; $11,000 toward a records system software for the police department; and $5,000 from the tobacco tax was granted to Stepping Stones.
During opening remarks, Trustee Lani Kitching briefly addressed the recent Boulder tragedy. “Having survived a similar incident several years ago,” she began, “I know there’s no class of condolence that can cut through the profound shock and utter disorientation over a sudden loss that the impacted families and affected communities now and long after will suffer. To those deeply stricken, just know your neighboring municipalities, families, and friends feel you and stand ready to bring their support.”
Trustees voted to accept a public art donation from Carbondale Arts. The bear sculpture overlooking the Nature Park will be relocated nearby onto the town’s right-of-way. Glitter & Gold, Ltd (aka AXD Babe) received a transfer of liquor license for her 689 Main Street business. KDNK was approved for a special event liquor permit for Dandelion Day, May 8, in accordance with prevailing COVID restrictions. Carbondale Center Place was granted permissions necessary to proceed with demolition and redevelopment of the Sopris Shopping Center.
The main item on the agenda was summer street closures to assist restaurants with ongoing capacity restrictions due to COVID. Continuing their discussion from a work session the previous week, Trustees decided that Main Street will close to cars from May 1 to Oct. 15, consistent with outdoor deck allowances for restaurants, on Wednesday through Saturday evenings from 4:30 p.m. to 10:30 p.m. Town staff will work with restaurant owners on set-up and take-down, but that is their responsibility. Restaurants can also apply for a deck space extension, utilizing a second parking space, if the neighbor directly fronting that space consents. The motion passed with Trustee Marty Silverstein casting the sole dissenting vote having suggested that the street closure could avoid Thursdays so as not to conflict with the weekly summer rodeo.
It was decided for the sake of clarity and consistency to fix the dates, instead of making street closures dependent upon state or county COVID restrictions. “Part of what we learned from last year,” commented Trustee Heather Henry, “is that anything can happen.”
Several trustees and members of the public also commented on the pleasant atmosphere established by street closures. Trustee Marty Silverstein interjected that if Main Street closures were for any reason other than in response to a public health crisis, the matter should go to a vote at the next municipal election.

From the staff’s weekly reports:
Spring Cleanup and Waste Diversion Day is scheduled for April 24.
Seasonal bald eagle closures ended for Nuche Park and Riverfront Park.
Parks & Rec is hiring for seasonal work: seeking lifeguards, water safety instructors, a recreation assistant, fitness instructor, and mowing services.
“Where My Peeps At?” Scavenger Hunt Race is on April 3 at 9 a.m. The cost is $25 per team of two to six people. Registration is at carbondalerec.com
Public tennis courts at Triangle Park are closed for crack repair. North Face Park courts and the skatepark street course are now open.
Carbondale Nature Park is tentatively scheduled for a burn the week of March 29. This technique for soil health and weed control is part of the Integrated Weed Management Plan for 2021.
Ditches are anticipated to be turned on, April 15. Meanwhile, town crews will be cleaning irrigation ditches and smoke may be visible from burning.
P&Z had two public hearings on March 11. The first was for a proposed ADU on Mancos Street. The second was an ANB Bank application for a new building. Both hearings were continued to April 15.
Planning staff held a pre-application meeting for a new development at 156 12th Street for a seven-uit townhome development. Each townhome has three bedrooms and would be for-sale units.