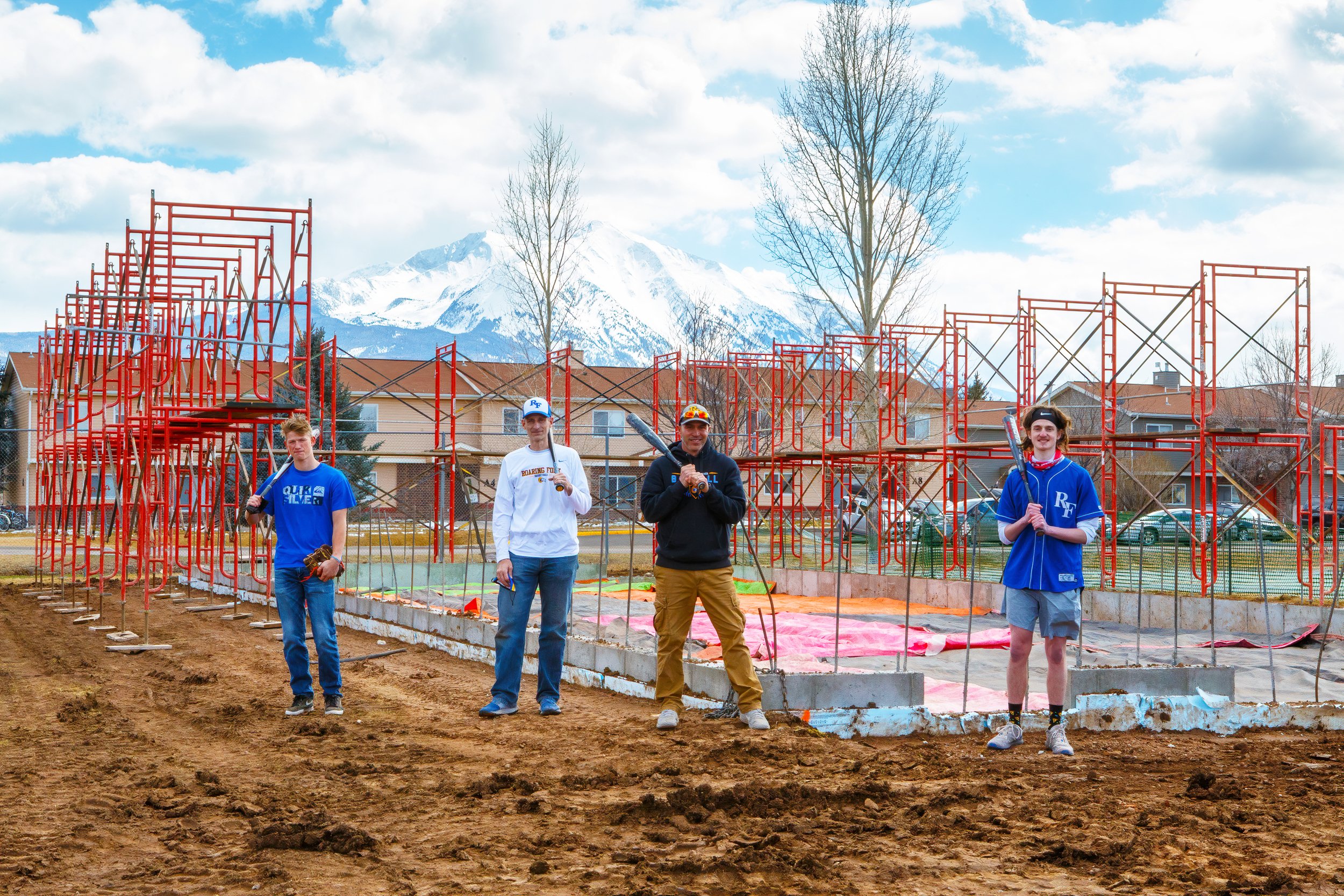 At the site of the future RFHS indoor batting facility, (left to right): David Good, Athletic Director Dominic Yoder, Head Coach Marty Madsen, and Ray Siegfried are eager to get in a few swings. Photo by Sue Rollyson.

What’s that famous line from the film “Field of Dreams?” If you build it, they will come. In Carbondale, it’s — if you need to build it, we will come.
Construction is underway on an enclosed 80 foot by 30 foot batting facility at Ron Patch Memorial Field’s southeast corner. When the indoor batting facility is completed, the Roaring Fork High School (RFHS) Rams baseball team will have a dedicated space to practice. Players will get in their batting practice reps to develop and improve their game skills, regardless of the rain or snow.
RFHS baseball coach Marty Madsen said several Roaring Fork Valley businesses are donating materials and labor for the project’s completion. Money is also being raised in an online GoFundMe campaign to cover costs for other aspects of the project, such as permits, inspections, lights, and turf. Madsen said, “So they are people that are still coming up and saying, ‘Oh, I still need to be a part of this project, too.'”
The team shares the RFHS gym with other activities. It has always been a jostle, but this year it’s been even more of a challenge. COVID-restrictions shifted space use in schools, and the gym, typically used for baseball practice, is now used for a study hall. There were safety concerns with hitting baseballs indoors. “Even the auxiliary gym is dangerous with hard balls and those concrete walls. It’s pretty dicey,” Madsen said.
Madsen recalled three years ago, when the team had a snow delay for a game with Olathe High School, they used their indoor batting facility. He said, “The kids were like, ‘We could do this coach.'” With that seed planted, Madsen began the planning process, which included a GoFundMe campaign.
No one is more excited about the facility’s completion than the players themselves. Two members of the RFHS baseball team, Ray Siegfried and David Good can’t wait to have a baseball-dedicated facility.
It will also make Carbondale unique. “You could go play at maybe Basalt or Glenwood, but neither of those schools has something like this. It makes us kind of stand out,” said Siegfried, who is in his fourth year with the team.
Good, a junior, said the facility had been long anticipated. He said, “I’ve been waiting for something like this around here for the longest time because you can’t hit baseballs outside during the wintertime. So now that we’re gonna have indoor batting cages, we’ll be able to get some work in over the wintertime.”
RFHS Athletic Director Dominic Yoder explained that Madsen, in his 18th year working in Carbondale schools and 10th year as RFHS head coach, built and fostered relationships within the Roaring Fork Valley community to make the project a reality. “Marty has done all the legwork. I’m super proud of what he’s done,” Yoder said.
Madsen explained, “I’ve been here long enough to know a lot of people in the trades, and they’ve invested in our community, and they were like, ‘We can make this happen. Our schedules are crazy, but we’ll do our best to help you out the best we can.’ We put a schedule together, and they were all like, we’ll make it happen.”
Several businesses have generously donated materials and labor. Jason Gallegos of The Gallegos Corporation was instrumental in getting excavation work scheduled.
T.J. Joiner of TJ Concrete Construction is donating labor and forms. Joiner said the concrete slab is going in next week, with concrete donated by supplier Casey Concrete and Ryan Pratt of First Builders Choice is donating the rebar. Joiner, a former coach for RFHS football and baseball, said, “It’s a great group” of people doing the work and “I love to see kids in sports, doing sports, and I’m all for supporting that kind of thing.”
Yoder and Madsen agree the facility will be a valuable asset to RFHS’s baseball program, now and into the future, with the greater community reaping the benefits of fostering interest in and supporting youth baseball programs.
“It will change the dynamic of this current team and the visibility to the younger players and the opportunity that they have here to play baseball,” Yoder said.
Siegfried summed up what the facility means for the future of baseball in Carbondale, “It’s going to be a game-changer.”
Project completion is expected in early to mid-May. Madsen said they are still accepting donations. The GoFundMe page is at bit.ly/RFbatting, and you can email Coach Madsen at mmadsen@rfschools.com for more information.