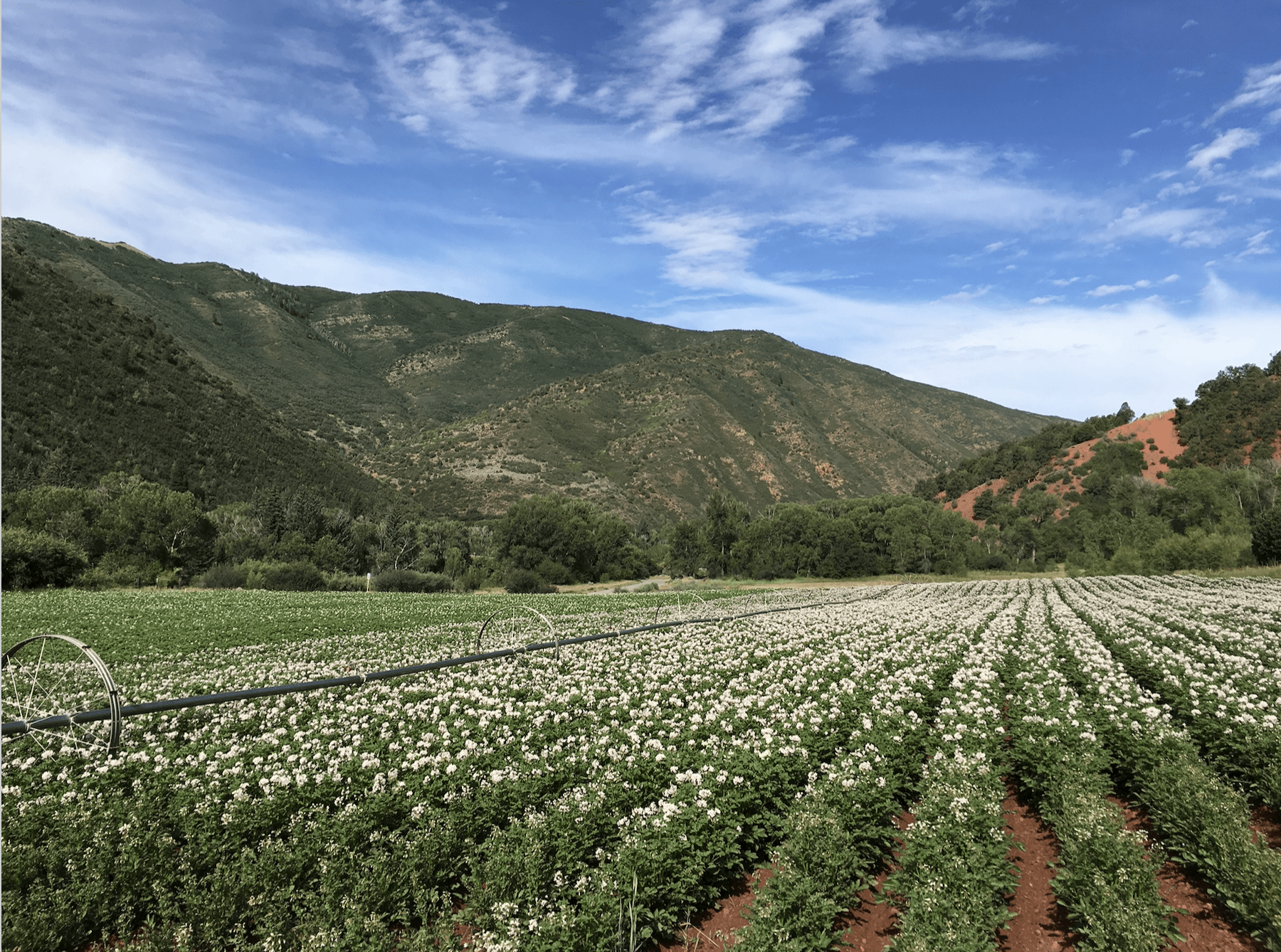 Pat Scanlon, co-founder of Woody Creek Distillers (WCD), would trial nine potato varieties in search of the perfect vodka potato. In so doing, WCD became the first lessees to grow vegetables on Pitkin County Open Space and Trails ag lands.
“Of course it would be a Colorado potato,” Scanlon chuckles, describing the venerable Rio Grande Russet.
“As a ninety-day potato, it barely squeaks into our growing season, and that last month is where it really puts on weight, just puttering along those first two months. It’s critical to get as far into those 90 days as we can. If it goes short, it could put us under for that year. We make very little off of each bottle; it’s about seven times the cost of doing vodka with grain. But you just can’t touch the quality of a potato vodka.”
Scanlon and distillery partner, Mark Kleckner, made the leap to potatoes from careers with Lockheed Martin.
“I don’t think we could’ve done this if we weren’t engineers to figure stuff out on the fly. There were so many technical hurdles that required us to sit down and use our brain.”
The potato equipment manufactured today is enormous and expensive, catering to industrial farmers tackling eight rows at a time.
“We had to start out small, with a little mom n’ pop planter,” says Scanlon, “a mom n’ pop digger — working one row of potatoes — pulled behind a tractor. They’d be laying on top of the ground and we had to pick ‘em by hand with five-gallon buckets.”
Hand labor became too costly as WCD grew.
“We started researching equipment from the ‘50s and ‘60s. We bought a 1965 Lockwood 4-row planter. We fixed stuff on it. We fabricated parts. We made it work.”
Scanlon shares a photo of a potato washer he developed, sourcing an old 500-gallon milk tank from a dairy farm “back East.”
“My guy Wouter [Olivier, day-to-day WCD ag operations,] is tremendous with fabrication; and he’d do it with our drawings, with our thoughts.” Scanlon beams.
Farming isn’t new to Scanlon, who grew up in Upstate New York.
“Big Irish family. I was the last of seven kids, my dad still of the Irish Catholic mentality of farming: have big families so you don’t have to hire anyone; you use your kids. So that’s what we did. We didn’t grow up with money, so in the summers we had to have huge vegetable gardens. We canned sweet corn, we canned cucumbers, pickling them so we had food in the winter. It wasn’t a hobby, it was a necessity.”
The land ethic Scanlon absorbed as a kid flourishes today. He’s established two conservation properties — 800 acres of the family land in Woody Creek, and the Quahog Bay Conservancy in Maine. The geography of Scanlon’s youth, the bay is a place he and his wife Mary wanted their own children to experience. Pollution, litter, and a steep decline in the fishery motivated the couple to restoration work, beginning in 2011 and culminating with the formation of their nonprofit.
Stewardship is also a critical component to leasing Pitkin County open space. Contract terms mandate regenerative processes. As a root crop, potatoes devour soil nutrients. Scanlon explains how they grow between two and three years on, “and then you go off for as long as it takes to bring the nitrogen back up, and we do soil testing to tell us when that right time is.”
WDC restores field vitality through nursery crops of rye and oats as slower growing, nitrogen-fixing alfalfa sinks its roots. Quick to establish, rye sends dense, fibrous roots into the soil, protecting it from wind and water erosion. Oat roots, Scanlon explains, help to trap nitrogen that would otherwise be lost to leaching in the fallow seasons between live crops.
“If you don’t take care of wildlife, it’s not going to take care of you. I can spot fields everywhere that aren’t doing very much for wildlife,” Scanlon says ruefully. “If you just put a little money into it, and effort, you could turn it around so quickly. It benefits the wild turkey, deer, elk, and anything in between that eats — the whole food chain — rabbits, mice. You’re helping out the birds — raptors, hawks, and eagles. It’s just such an easy thing to do.”