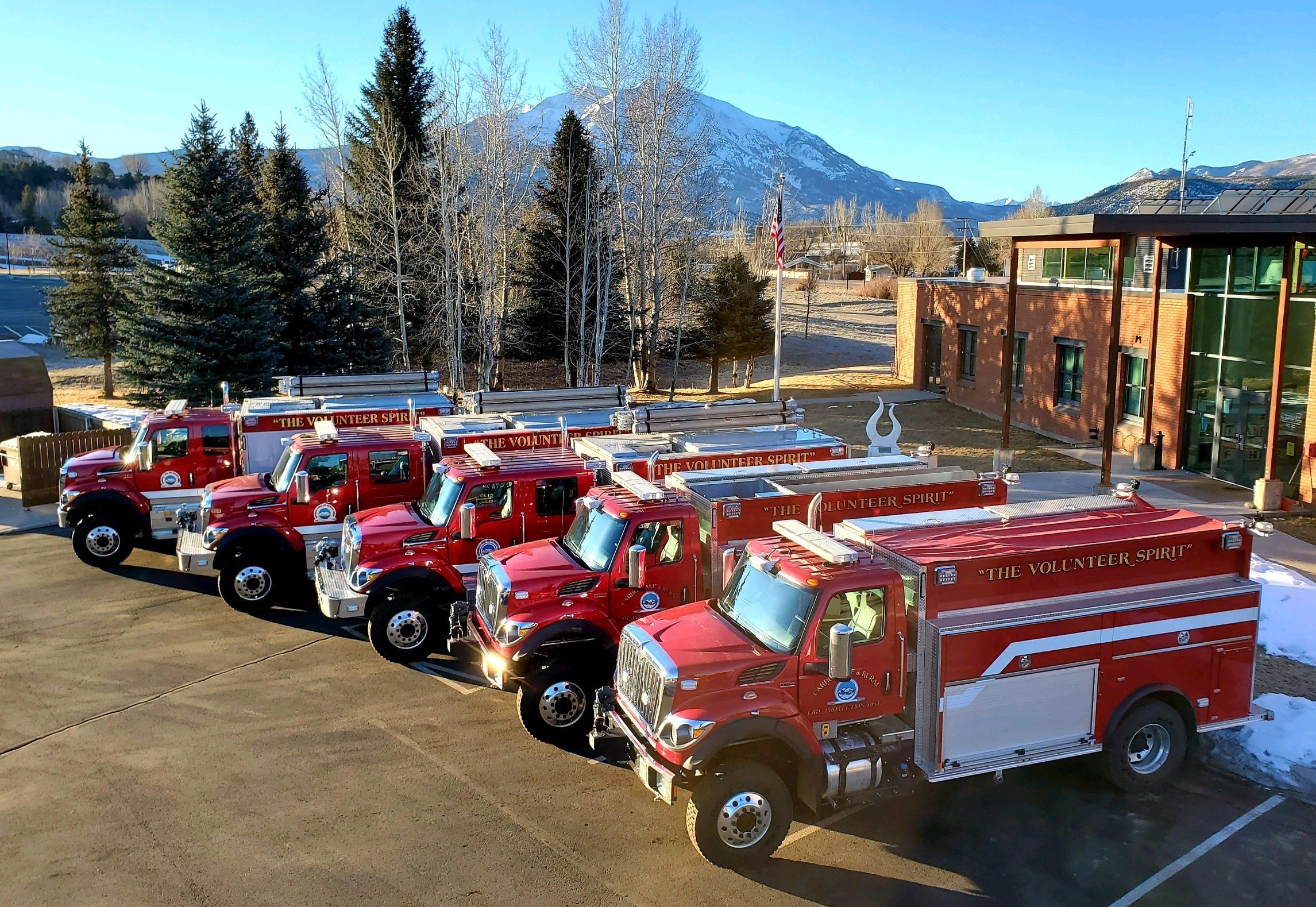 The Carbondale & Rural Fire Protection District (CRFPD) announced in mid-March that it had recently received shipment of five pieces of new fire-fighting equipment. Included were three fire trucks and two water tenders (tanker trucks).
The fire trucks are replacing ageing equipment at the Marble, Redstone and Missouri Heights stations, while the tankers are destined for the Carbondale and Marble stations. The replaced vehicles range in age from 25 to 47 years.
All five new trucks have been designed to function for both structure/vehicle and wildland fires. As Fire Chief Rob Goodwin put it, “The engines are wildland specific,” with four-wheel drive and high front and rear bumpers to traverse off-road terrain. Goodwin noted that the district spent several years researching and refining the specifications they wanted for the new vehicles.
The new water tenders are especially important, as each can carry 1,500 gallons of water into areas with no hydrants — e.g., locations of wildland fires. Each also has what is called “pump and roll” capability, meaning that they can direct water on a fire from a remote-control turret and from two sprayers mounted on the front bumper while in motion. The tankers are what Goodwin called “tactical tenders … game changers in wildland [firefighting] service.”
The revenue needed for acquiring the vehicles came from a $7.5 million fire-district bond issue approved by voters in 2018, which provided the $1.9 million purchase price. But, as Goodwin noted, it also allowed the district to upgrade two of its firehouses, buy new ambulances and replace old equipment, notably the self-contained breathing apparatus that firefighters wear in burning buildings. “My number-one goal as fire chief is keeping everyone alive,” he added.
Goodwin was also excited about a new training facility, which will be built behind the Carbondale district headquarters. “It will be state-of-the-art and will not only provide training for our firefighters but will also be available for other groups to use.” Work is scheduled to begin in May and wrap up by mid-October.
The new trucks are expected to be operational by mid-April. When asked about the old trucks, which are still serviceable, Goodwin said that they planned to donate or sell them cheaply to a department needing them, adding, “We’ve donated other equipment” in the past.

Fire district history
In its early years, Carbondale had no organized firefighting service, and the town suffered disastrous fires between 1891 and 1905. As described by Carbondale Historical Society (CHS) board member John Williams, “Early firefighting in Carbondale was initially by bucket brigade. At first, water was brought in by ditches and wooden pipes, which were later replaced with metal piping.”
A 1967 “History of Carbondale” document from the CHS archives states that by about 1912, water was piped in from springs on Mount Sopris and fires were “quickly extinguished by a fine group of men known as the Carbondale Volunteer Fire Department.” Another CHS document noted, though, that firefighting remained largely ad hoc until the department was officially formed in 1954.
The CRFPD was established in 1955, the same year Carbondale acquired its first fire truck. Its territory encompasses some 300 square miles, stretching southward from Spring Valley in the north, through southeastern Garfield County, much of western Pitkin County and the portion of northwestern Gunnison County constituting the Marble area. Included in its jurisdiction are portions of White River and Gunnison national forests and parts of the Maroon Bells-Snowmass Wilderness. In addition to the four fire stations mentioned above, a fifth is located across Highway 82 from Spring Valley Road.
For more than 25 years, the CRFPD remained an all-volunteer force. In 1980, however, a paid chief was hired. Increased population growth in the region brought the need for more professionals on the force, and the CRFPD began adding such paid positions as deputy chief, fire marshal and training coordinator. In all, 25 employees are now paid and full time, while another 40 are volunteers.
Another CHS document detailed early ambulance service in Carbondale. Initially, it was provided by Glenwood Springs mortuaries. The town obtained its first ambulance in 1961. The CRFPD added ambulance and basic emergency medical technician (EMT) services in 1978, gradually upgrading the training of its volunteer EMTs in the 1980s. The district now has four ambulances and professional paramedics and EMTs, in addition to volunteers. All are now trained in advanced life support services.
Chief Goodwin had nothing but appreciation for the district’s citizenry, stating, “We couldn’t do what we do without their support.” He has been especially proud of the district’s long volunteer tradition, noting its motto, “The Volunteer Spirit.”